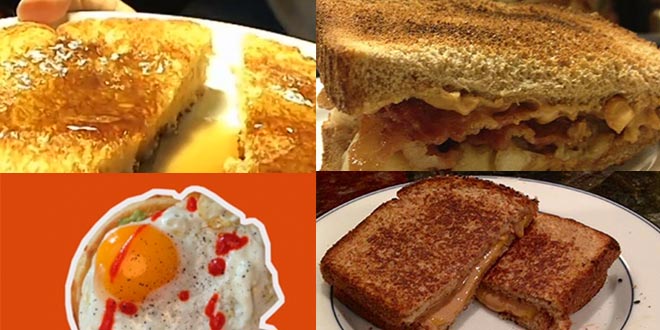 Now that our judges have determined the Elite Eight, you readers have once again taken the reins. After a couple days’ quick polling, you’ve selected which four of our weird-food-combination contenders should remain on the bracket for the next round.

You may notice that you, the readers, as a collective, feel a certain affinity toward toasty sandwiches. And peanut butter. And cheese. And that’s all right! The question now is, which two weird combos are weird enough to make it one more round (and maybe even to victory)?

You are now free to vote in the current polls, Maple Grilled Cheese vs. Eggy Waffle and PB&B&B vs. Peanut Butter Grilled Cheese. These polls will remain up on the site for two days, after which we’ll announce which two finalists that will go on to compete in the final competition to become Munch Madness 2014 Weird Food Combo of the Year!

As we celebrate the various victories of the Final Four, let us also remember the tasty and fascinating snacks that were strong enough to make it past the discerning taste buds of our judges, but didn’t quite blast into the unpredictable favor of our taste-along-at-home readers: