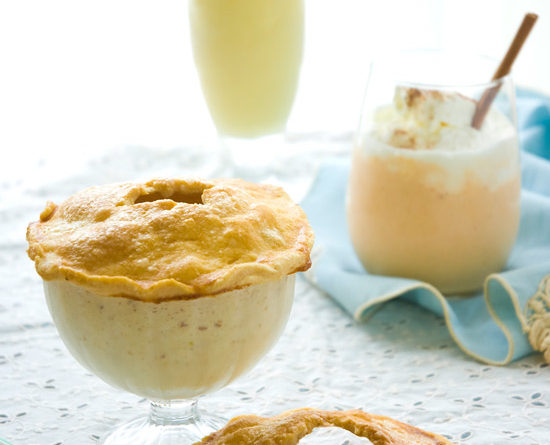 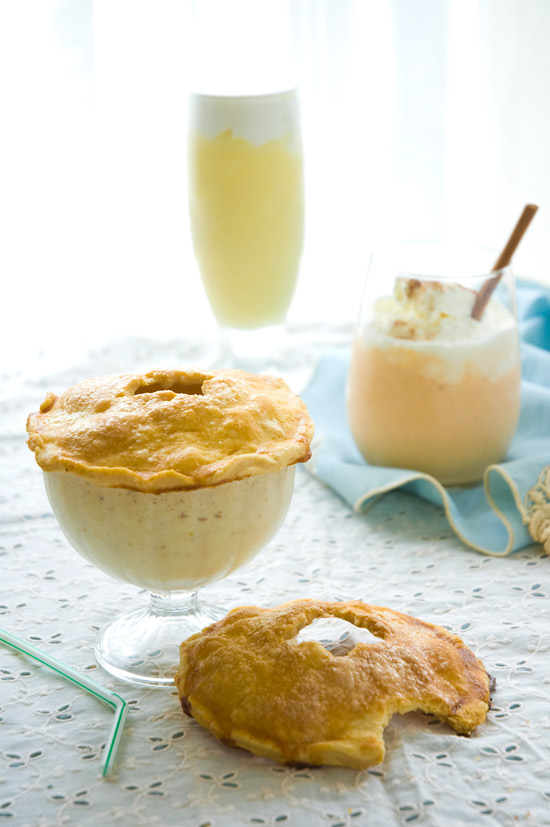 In the southern U.S., as well as most of the lower hemisphere and places like Sudan and Malaysia (I’d imagine), even though it’s the same October as the rest of the world, it isn’t really the same fall. Not yet. And the only thing I have to say to my Instagram feed and all of you with your tights and boots and fuzzy scarves and Peter Pan collars and vintage coats: WHATEVER YOU GUYS. Bet you miss milkshakes.

Here in Georgia, we’re still enjoying our milkshakes. And they taste like fall. They taste like pumpkin spice and apple pie and mulled whiskey and dozing off by the Netflix yule log.

So basically what I’m saying is I’m not even that jealous. 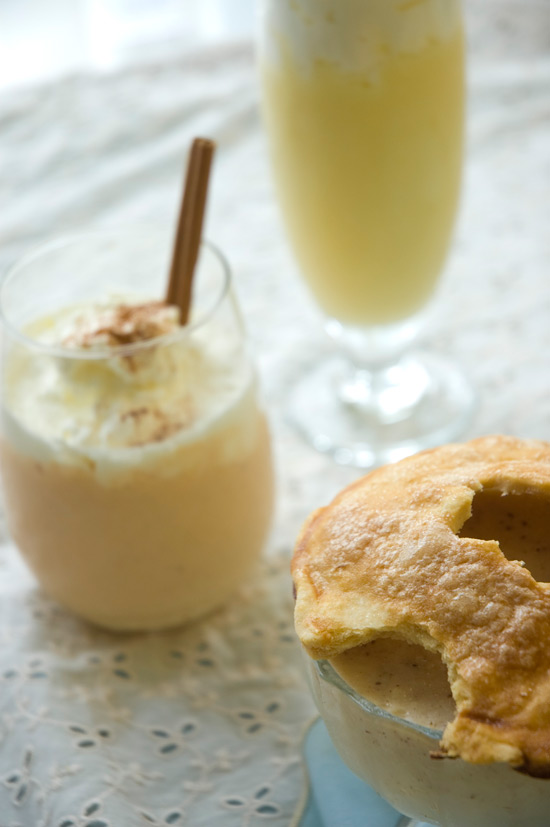 Regardless of the weather, here are three simple spiked pieshakes that you can make anywhere you can find a blender. They employ three distinctly different approaches and levels of involvement. The apple pieshake contains fresh pureed apples, an adorable, tasty top crust, and warming spices. The banana cream pieshake is thick and sweet and relies on a little instant pudding mix. And the pumpkin pieshake—laziest of them all—is nothing but good booze blended into store-bought pumpkin pie ice cream. 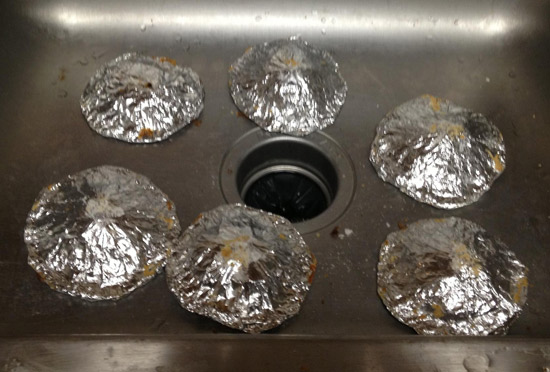 My friend Anthony and I made a bunch of these recently for our friend Jess’s birthday. The shakes themselves are inspired by the Classless Cream, but the mini top crusts are really the crowning touch. I “sculpted” a couple of molds and drew a confusing picture, and Anthony, baking hero that he is, whipped up some dough and made beautiful mini top crusts. Here’s how.

How to make a mini top crust mold

First, select a glass for your milkshake. Lay a large piece of foil over the top, pressing the edges down around the sides of the glass. Remove it from the glass and gently crumple the foil inward along the crease formed by the rim until you have a disc the same size as the top of your glass. (If your disc is more than 1/4″ thick around the edges, pinch the edges so they’ll be thinner. We’re aiming for a dome shape.) Wad up some more foil and place it in the center of the circle to create the height of the dome. Lay a third piece of foil over both the wad and the disc, then gather it tightly around the bottom of the disc, creating a single mold that looks like the photo above. (A photo, by the way, that Anthony took and texted to me, along with the one below. It was VERY EXCITING.) 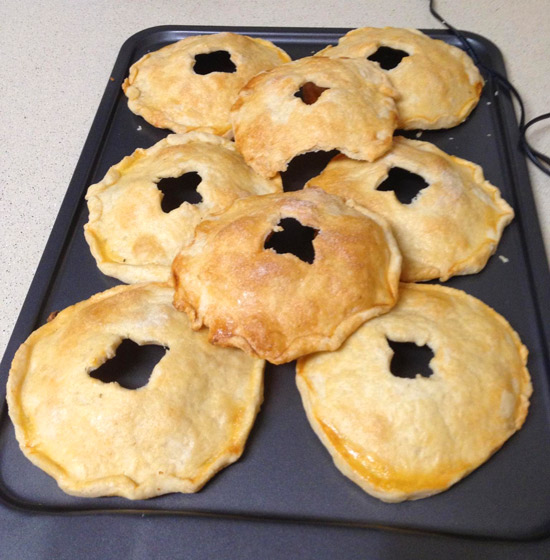 How to bake mini top crusts

Prepare pie crust according to the recipe of your choice, or purchase and thaw store-bough crust.

Place your foil molds on a baking sheet and preheat the oven to the temperature given in your recipe.

Roll out the dough on a floured surface and lay your glass upside-down on top of it. Cut around the glass to make a circle about 1/2″ larger than the rim of the glass, then place the dough circle on top of your foil mold, allowing it to hang past the edge of the mold. Cut an X (or the shape of your choice, big enough to poke a drinking straw through) in the center  of the dough. Crimp the edges with your fingers or a fork. Brush the dough with egg wash, sprinkle with sugar, and bake according to your recipe—but keep a close eye on the crust, because without a pie underneath, it’s bound to brown more quickly than expected!

When top crust is cool enough to move, perch it atop the pieshake of your choice. 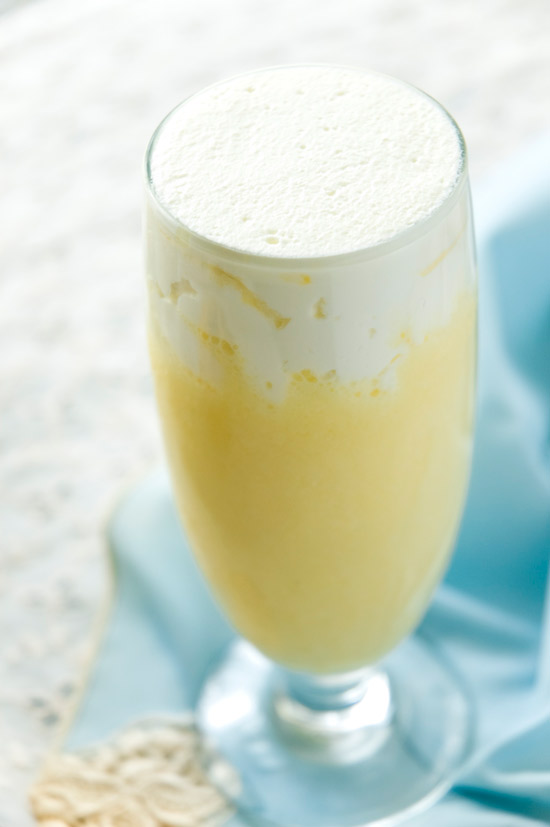 Blend together first three ingredients until powder is dissolved. Add ice cream and blend at high speed until milkshake.

PROTIP: Left to its own devices in the fridge, this becomes spiked banana pudding in a matter of hours. It will be delicious. 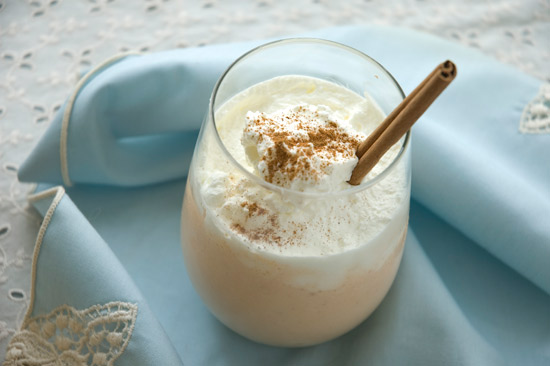 Blend all ingredients at high speed until milkshake. Top with whipped cream and cinnamon. 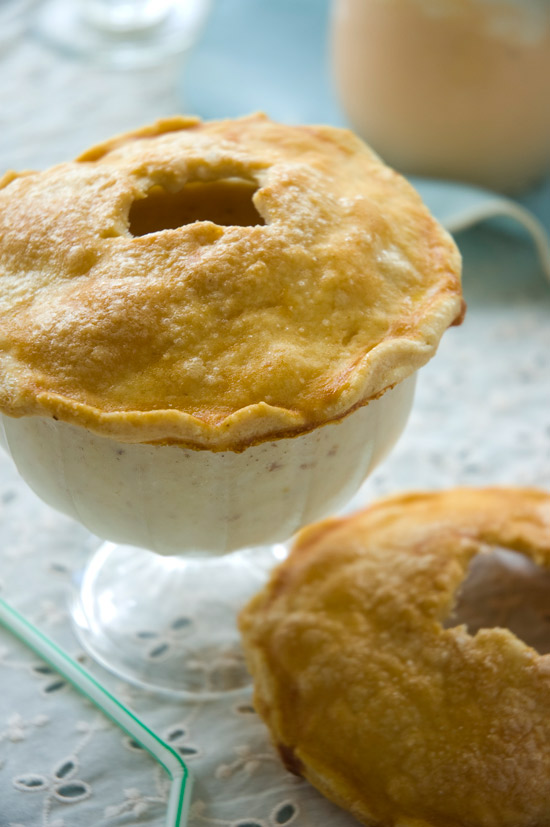 In a food processor or powerful blender, combine first three ingredients and process until smooth. Add ice cream and blend until milkshake. Top with a mini top crust!