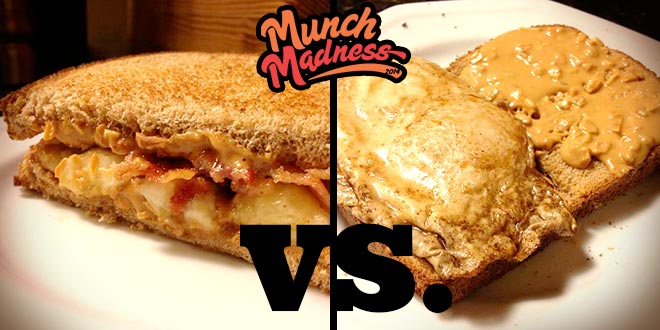 When Kristina approached me about judging Munch Madness and I said yeah totally, she followed up by asking “how do you feel about peanut butter?”

This is roughly what I told Kristina before she assigned me these two concoctions. So let’s get started:

Having done no research into this, I’m assuming that this is what most people refer to as “The Elvis,” and is the sandwich that Mr. Presley cherished up until the day it killed him. Make no mistake: Elvis is dead. If he ate these monster sandwiches more than once a month, I guarantee you that is what killed him, because y’all, glory and refinement like this sandwich is not meant for this earth. Here is the sandwich pre-assembly:

I’m using Kroger brand everything, because I keep it real. Also, Kroger brand crunchy peanut butter is damn good. It’s nice and savory and it’s wicked chock-full of peanuts. I mean, look at this:

I cooked more bacon than I needed because 1) the first batch is just to prep the pan and so that you’ll 2) have extra bacon to eat while you prepare the rest of the meal. This is why I’m in terrible shape. Carrying on–I’m using Arnold 100% Whole Wheat Bread because I’m an adult and I’ve spread a liberal amount of peanut butter on both pieces. I’ve heard different approaches to getting the banana into this thing, including mashing it up and mixing it with the peanut butter. I ain’t got the kind of time required to figure out the proper banana-to-peanut butter ratio, so I’m just pulling the banana into pieces using this handy trick my wife taught me. If you peel the banana and give it a gentle squeeze like so… 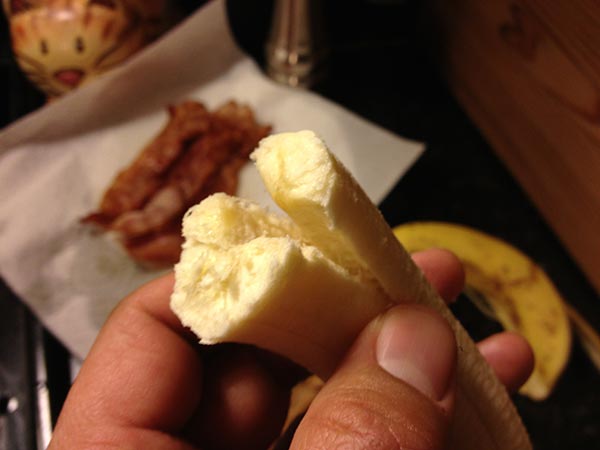 …with a little pulling and prodding, it’ll split into three even pieces. So yeah, pull that mess apart and lay it on down. Then apply bacon.

Okay, so the instructions specifically called for the bread to be toasted. Good sir or madam, surely you meant to say “grilled.” I mean, you’ve come this far. But I meant to follow the rules. But also, fuck you, don’t tell me what to do.

I mean, this thing looks gorgeous. By this point in the process, your house smells like bacon and love, so you’re getting this whole olfactory experience. So let’s get on that shit.

Oh my god guys, this is so much sandwich. Seriously, I filled up and started getting the “Warning: Danger Ahead” signals from my tummy by the third bite. Between the hearty peanut butter, the fatty bacon, and the wild potassium roller coaster of the banana–not forgetting the fiber-rich wheat bread with that grainy shit all over the crust (you know how we do), after just a couple bites, I was already looking forward to a nap. And I cooked this stuff up first thing in the morning. Seriously, I’m typing this at like 7:30 y’all.

But the taste? Elvis was on to something. And that something was the magical combination of all these ingredients (though I imagine The King used white bread). Peanut butter and bacon are like Julie Delpy and Ethan Hawke. They may not see each other often, but when they do… fireworks. But the banana has to be their third–that or some other sweet thing like strawberry jelly or thin apple slices (this thing would be insane with thin, slightly tart apple slices. Consider doing this in the autumn). If the peanut butter is the bass and the bacon is the sizzling midrange, then the banana is the sparkling treble of this sandwich. You need it, or else the whole thing falls into muddiness and despair, like a SUNN0))) album.

This is Sometimes food. Seriously, I need to lie down. BUT FIRST:

Guess what I’ve never done before! Fried an egg, that’s what! Knowing this would be integral to this assignment, I went and had breakfast at my parent’s house last weekend and watched my dad cook eggs. Like most of the men in my family, cooking breakfast is sort of his thing. And fried eggs over medium is how things go down over at Papa Johns’ place, so I stood by the stove and paid attention as he melted a shitload of butter in a non-stick pan,* carefully cracked an egg into it, then expertly scooped it up onto a spatula and flipped it over. Boom. Replicating the process in my own kitchen, I made the rookie mistake of overheating the pan, so when I dropped aforementioned shitload of butter in, it kinda caramelized. Is that a thing that can happen? Can you caramelize butter? Well it went brown and bubbled a lot, but it got the job done!

Once again with the crunchy peanut butter. I’ve decided to do a half sandwich because these bread slices are huge and will accommodate and my stomach is still in thrall to that PBB&B, Jesus God Almighty.

I was going to slap this thing together when I was taken with the notion to break out the fancy silverware.

This is a delightfully messy sandwich, what with the egg yolk, but also the runny, warm peanut butter. The PB does more heavy lifting here, flavor-wise, than in the previous sandwich. I would not have expected peanut butter and egg to go together this well, though it may be a while before I muster the courage to try a PB omelette (hey Kristina, consider that my entry for next year’s Munch Madness if no one’s done that before: a PB&J Omelette).

One thing about this sandwich is that it is relentlessly mushy. Part of the idea behind using crunchy peanut butter was to give the thing some texture apart from soft, sticky, runny. And I guess the toast helps, but dang if I wasn’t looking back at the last couple bites of the PBB&B,** longing for its comforting crunch. If the PB&E wants to step up its game, I suggest that it draft from deeper into the breakfast bench–hash browns, for instance, would be totally boss on this thing. Or while we’re at it, what the hell, why not a fried chicken breast?***

To be fair to the PB&E, it could just be that I am full-to-bursting with toasted bread and peanut butter and would like to do the honorable thing and die face down in my kitchen now. I am loathe to sound like an internet cliche, but the thing with the bacon wins this round.

* Please excuse me while I describe this truly commonplace process, I am acquiring knowledge dammit

** No, I couldn’t eat the whole thing knowing I still had a whole other sandwich ahead of me