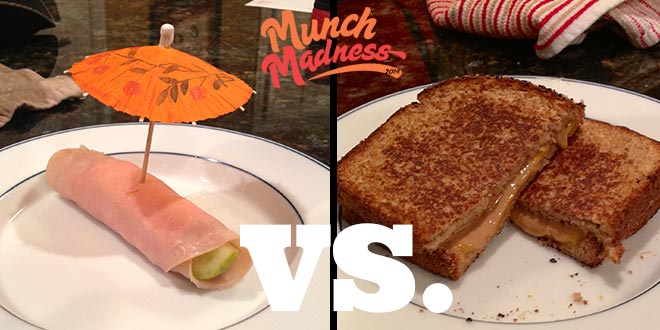 [The following has been kindly contributed by the ever-game Jack Walsh, producer, director and writer of numerous award-winning Public Broadcasting programs, and writer of humor and witty non-humor, published in places like Thought Catalog and Scene Missing Magazine. Today, instead, we have asked him to eat a weird sandwich and a pickle in a jacket.] 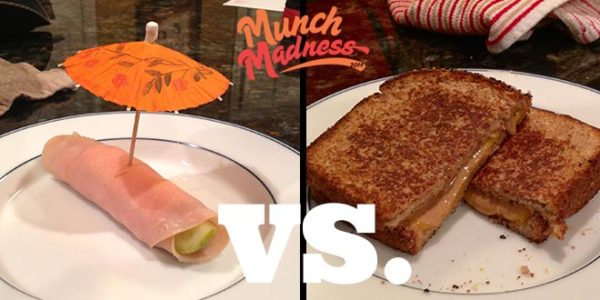 My mom told me that in her twenties, all she had for lunch every day was a Coke and a pack of what she called “Nabs,” which was not, apparently, 60s slang for an appetite-suppressing amphetamine, but rather short for Nabisco and often used as a generic term for the little six-packs of crackers you get in vending machines. Often, as in my mom’s case, this meant that ever-ubiquitous occupant of row D, slot 5 (your vending machine may vary), the cheese crackers with peanut butter on them.

The idea of these has never appealed to me. I mean, I’ve had them, but really, it’s a stretch to call those crackers actually “cheesy.” More just orange, really. Still, this is the only case I can think of where you commonly see peanut butter and cheese together as complementary flavors. In any other instance, I think it would seem odd.

My understanding of the criteria for this year’s Munch Madness was that the snacks were all supposed to be things that sound gross but that someone swears make for great flavor combinations. And, for the most part, the contenders each inspire an initial reaction (after “ugh,” I mean) of “I wonder what that tastes like?” Take, for instance, the grilled cheese and peanut butter sandwich I was assigned to judge.

But, I also got “pickle spear wrapped in American cheese and a slice of turkey.” I’m not sure who thought that would come across as a crazy flavor marriage. I mean, that’s just a sandwich without a roof, and I eat some variation on it several times a month. I guess there’s a chance it could transcend the sum of its parts, becoming the deli equivalent of the Avengers, or the Justice League, or We Are The World, but I feel like I probably know exactly how this tastes. 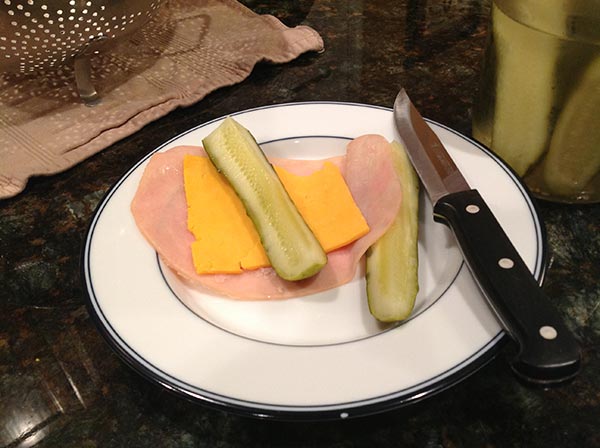 But first, the meat wrapped cheese ‘n pickle burrito thing. I do have to cop to making an unauthorized adjustment to the “recipe,” such as it is. The snack, as submitted to Knuckle Salad, called for American cheese. I don’t really eat American cheese very much for a number of reasons, the most notable being the fact that I’m not a little boy in the 1950s wearing a Davy Crockett hat. So, I went with a mild cheddar that doesn’t have the plasticky sheen and texture of American cheese. Now, I won’t be stuck with a leftover stack of tiny, yellow yoga mats.*

I also decided to make my own pickle spears. Pretty impressive, right? I should probably clarify: I cut pickle halves in half. I like to buy halves rather than spears because I find it oddly satisfying when I locate the corresponding hemi-pickles in the same jar. Pickle Tetris! 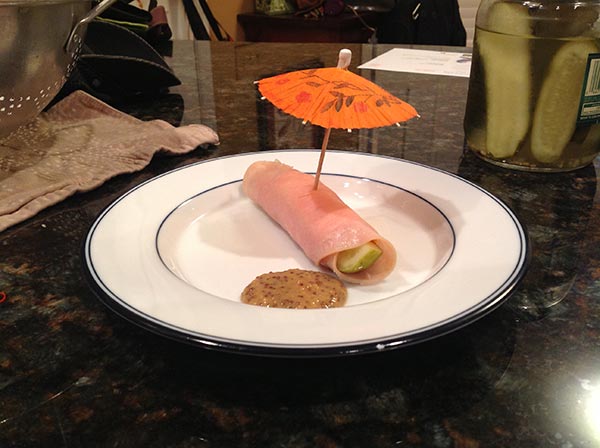 It would certainly make for a more dramatic narrative if there had been some sort of reversal upon my expectations, but no. This tastes exactly how you think it will. And that’s not bad at all. It works especially well with grainy mustard and a beer. But, you really don’t need me or anyone else telling you that. Eating meat, cheese, pickles, mustard, and beer together is the human equivalent of a spider spinning a web: it’s just one of those things you’re born knowing you’re supposed to do. (Camera pans over to see “SOME PICKLE” stitched in web.)

I knew that I wouldn’t really need help to finish off the meaty cheese pickle, but for the grilled cheese and peanut butter, I decided to enlist an assistant. My toddler, Adaline, had woken up hungry from a nap, and as I half suspected that this sandwich would be inedible, I thought I could multitask by getting her to help me dispose of any unwanted portions. And, also, maybe there’s some cheese/peanut butter appreciation thing I should be passing down as part of her grandmother’s legacy.

Adaline was crying when I lifted her out of the crib.

“Do you want a sandwich?”

“Do you want raisins?”

We went through several cycles of all of these until I came back around to “sandwich” for the fifth time.

I can be very persuasive. 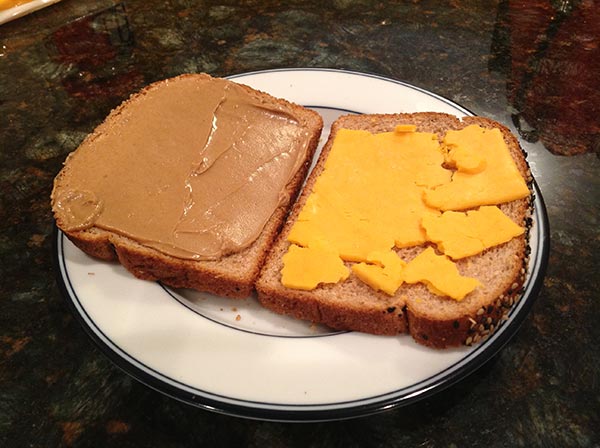 I thought the same mild cheddar from the cheesypickaturkey fingers would work better on the sandwich than, say, parmesan or pepper jack, so I went with that. I grilled it in a good bit of butter (my third favorite salt/fat deployment method) until golden brown, cut it in half, patiently photographed it while Adaline screamed at me, and then sat down with her at the table. 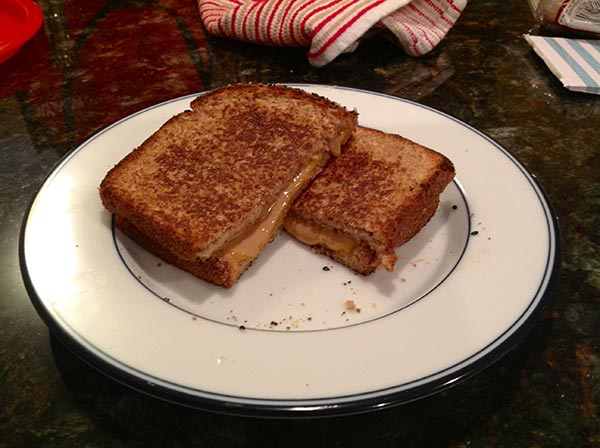 This combination works remarkably well. Mostly, the fat and salt in the cheese act as a booster to the richness of the peanut butter, which is the dominant flavor that hits first. Then, there is a little cheddar chaser. I’m curious as to how a sharper cheddar would work. Very well, I expect, and I’m definitely interested in trying it in the future. The cheese also seems to act as a binder for the melted peanut butter, keeping it all from oozing out.

Not that some doesn’t anyway. Adaline licks a few fingerfuls of peanut butter before she tries the sandwich itself. On the whole, she seems pleased.

“Adaline, how’s the sandwich,” I ask.

Curious if she can identify the flavors, I ask her what kind of sandwich it is.

I agree, and so, for exceeding expectations and soothing a crying toddler, I’m going with grilled cheese and peanut butter as the winner in this bracket of Munch Madness (pending results of testing for performance-enhancing Nabs). 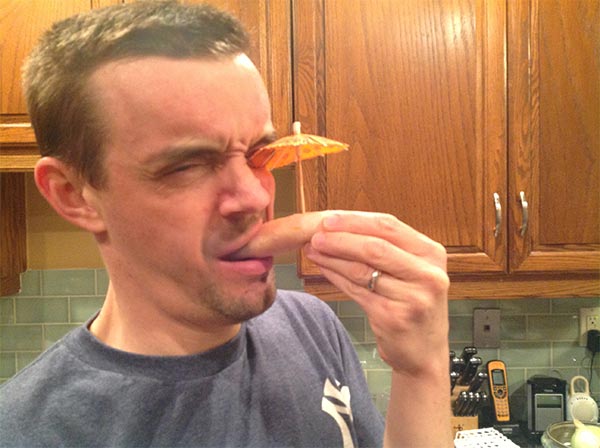 *The downside of using a less pliant cheese is that these roll-ups don’t really want to stay together, so I needed to spear them with a toothpick for photos. Then I thought I should use something more festive, so I went with a tiny tiki drink umbrella. What’s cooler than being cool? ICE COLD! I mean, A CUCUMBER WRAPPED IN A COLDCUT UNDER A PARASOL!