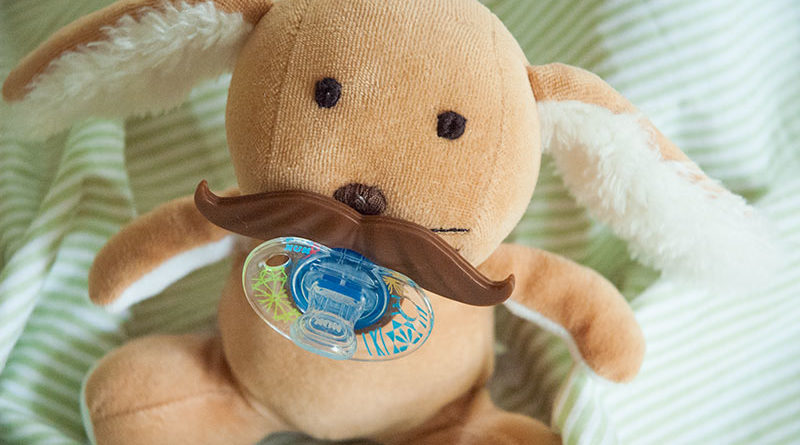 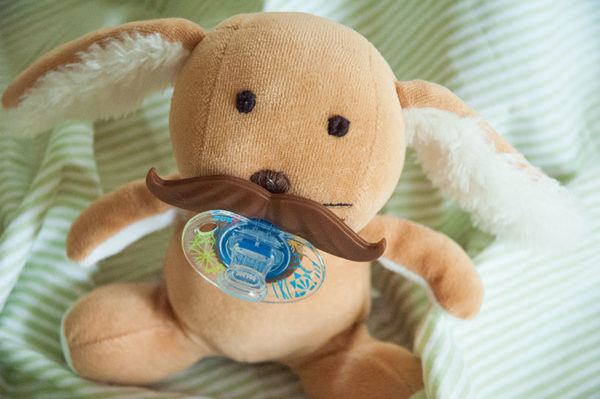 Go ahead. Make your jokes. But then make your own pacifier-mustachio-bunny, because you’re gonna want one of these, if you have a tiny child in your life. (If you don’t, you might legitimately not have a use for this. Or maybe, I mean, whatever…none of my business, guys.) 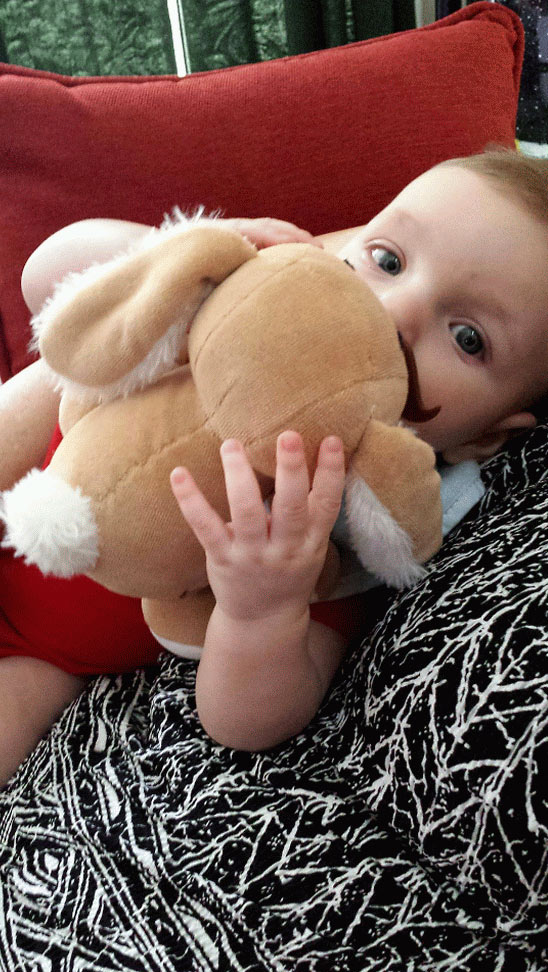 The Thrasher is a charming child on very many levels but when it comes to pacifiers he’s kind of a pain in the butt. When he gets his pacifier he’s like, “OMG FINALLY MY PACIFIER” but then right away he’s like “PTOO! BLEH!” and then he’s all “HOLY WTF WHERE IS MY PACIFIER WHAT HAPPENED NOOOOO IT’S GONE! GONE! HALP! HAAAALP!”

So what I was doing was sitting with him and holding the pacifier in his mouth for him, which made me feel like a real sucker, no pun intended.

Then I thought about it. And I had an idea. And I googled it to see if I could buy it. But I couldn’t find one, at least not with the right kind of pacifier. And that is why the Thrasher has a bunny with a mustachio and you can laugh all you want but I’m telling you right now it’s the best idea I’ve had since getting this baby, and not just because of the sleep deprivation and how I don’t so very with idea brains any now more.

You just need three ingredients, plus a needle and thread: a button-style pacifier (I used a NUK, but MAM makes them too), a grabbable plush baby-safe snuggle-friend (ours is a Baby Gap bunny), and a BeerMo

silicone mustachio, which is chiefly intended to add novelty to a beer bottle but can cleverly also be applied to pacifiers for a cheap laugh at a baby’s expense. 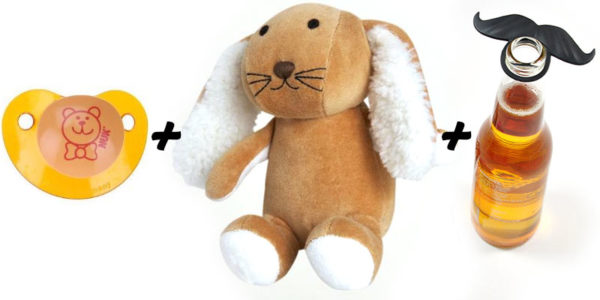 Put them all together and you get…

It’s not magic, and when he’s particularly flaily, he still needs a hand. But he’ll get better as he gets bigger, and in the meantime it’s a lot easier to rest my hand on the bunny than to hold a little binky against a wiggling target.

It also works in the car. Which is such a relief, because sometimes there is no adult passenger to ride in the back and keep track of the pacifier. (Or maybe you don’t want to force your adult passengers to do that. I guess it is kind of demanding. But he needs HAAAALP.) 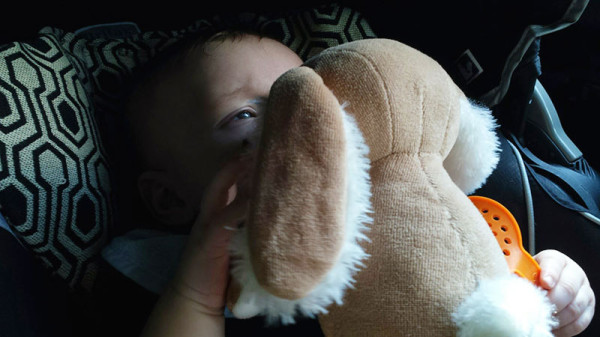 How is it assembled? Simple! Two careful stitches, just so: 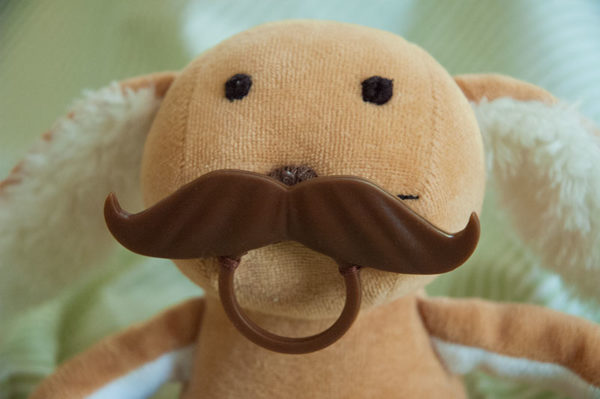 And then you can slip the pacifier in. Piece of cake. 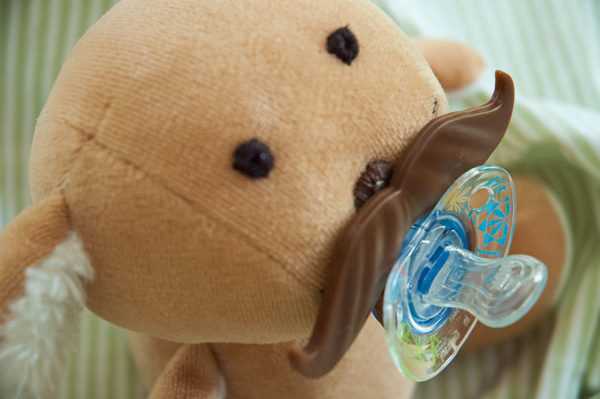 The pacifier pops in and out for ease of cleaning and replacing. That also means that baby can safely fall asleep with the bunny, and then you can sneak in and maneuver the bunny out of the crib whilst leaving the pacifier in place. (It may take some practice, but it can be done.)

Be sure to choose a plushie with a little bit of weight to it, which makes it harder for your thrasher to yank it out of his own mouth (HALP!). It doesn’t have to be a bunny, although he really loves to twiddle the ears, so I’d go bunny ten out of ten times. And it doesn’t have to be a mustachio, but an ordinary pacifier adapter

Finally, it doesn’t have to be attached to the stuffed animal’s face, of course—put it wherever it’s most easily accessible. If your plushie was designed to sit up, as ours was, you may also choose to tack the legs back a little bit with two extra stitches to make it a little easier for baby to snuggle it close without the legs getting in the way.

So! That’s my first baby project, brought to you by glorious, elusive sleep. Make this! Make it for a baby shower so everybody thinks you’re a smug-genius-baby-expert. Or make it for your own baby and stop holding his pacifier on his face like an idiot (i.e. me). 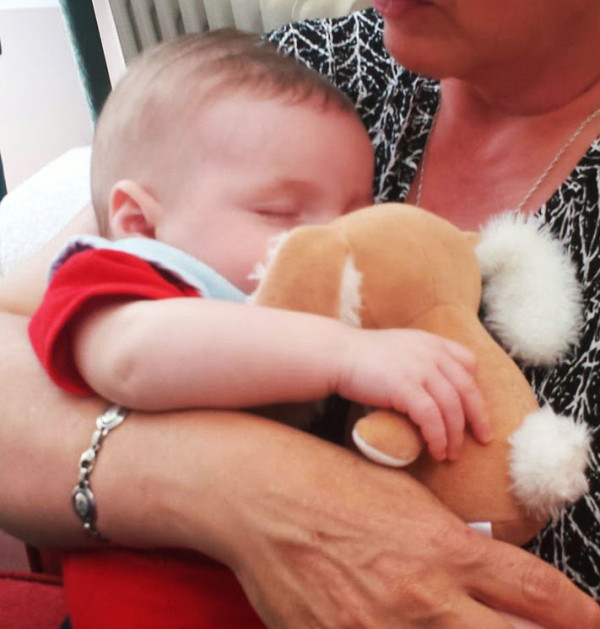 Bonus: It still functions as a bunny-friend, even when the pacifier isn’t engaged. And all of a sudden, the Thrasher gets to decide for himself whether he feels like a pacifier or not! PROOF: 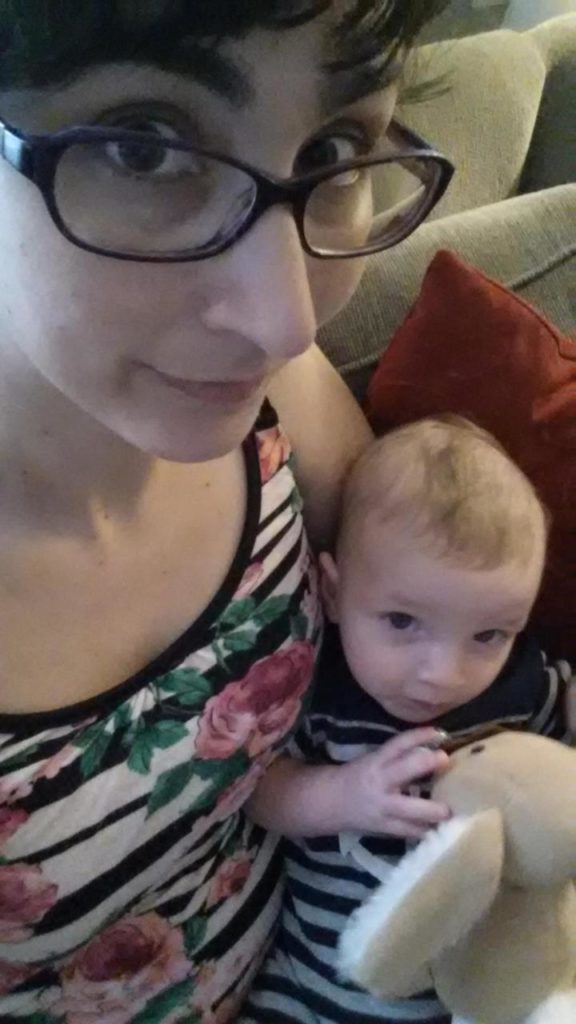 P.S. Oh, right, the name. We happen have a tiny sombrero and poncho in our bar that are just the right size for this bunny (I posted a photo to Instagram when I first made him, don’t you follow @knucklesalad?) and in my opinion, characterizing him that way makes the mustachio far less potentially creepy. There is a reason, after all, that you don’t see a lot of children’s toys with big mustachios. But this one creates the illusion that the baby is the one with the mustachio! Ho ho, how deliciously absurd.