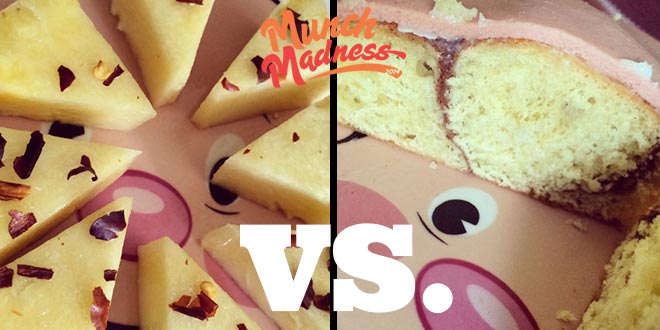 [Please welcome Chris Durso, writer and researcher behind the perennially-fascinating foodie-news blog Foodiggity, to judge this next match between your No. 3 seed (which actually tied for No. 1, it was just alphabetically third, so there it sits) and No. 14 seed.] 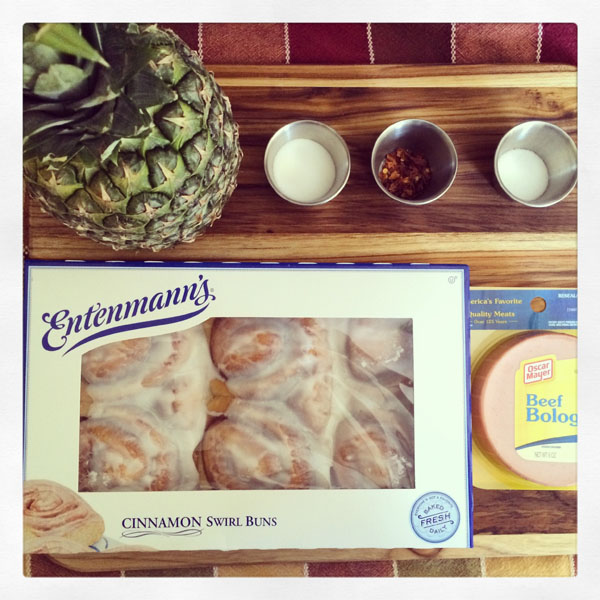 When I was first contacted by Kristina about participating in Munch Madness, there were a few initial thoughts.

First… How did she get this number? Secondly… I know Foodiggity covers some extreme foods and questionable food combos, but this doesn’t mean that we actually partake in these culinary abominations in our lunchroom.

Nonetheless, after much internal debate, my incessant need for attention took over. I decided to sacrifice my palate, while testing my gag reflex, in the interest of good fun.

I’m going to keep the judging simple, taking into account (1) which parts of my tongue will be adversely affected while eating these, (2) gag factor, and (3) a short critique. Let the culinary terrorism begin.

My challenge…. Pineapple with salt, sugar and chili flakes vs. Slice of bologna on a cinnamon roll. Is it too late to bail?

Slice of bologna on a cinnamon roll 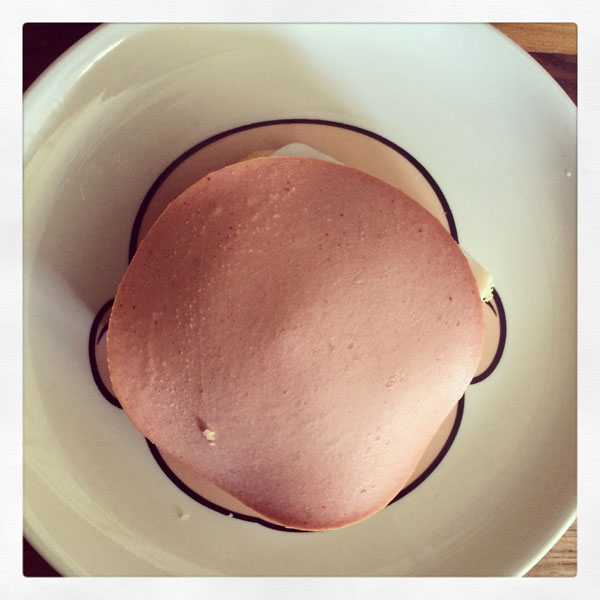 Let’s first take a moment to review the aesthetics of this dish — more specifically, color. There’s the desaturated pink-like hue of processed bologna, combined with the spectrum of beiges and browns in cinnamon rolls. There’s a reason why there are no respectable corporations or sports teams that employ bologna-pink and beige as their official colors. They are horrifying to look at.

Color aside, let’s get on to the reason why we’re here… To see if this flavor combo has any business coexisting. Parts of the palate we’ll be hitting: sweet, salty, porky. Gag factor: High. 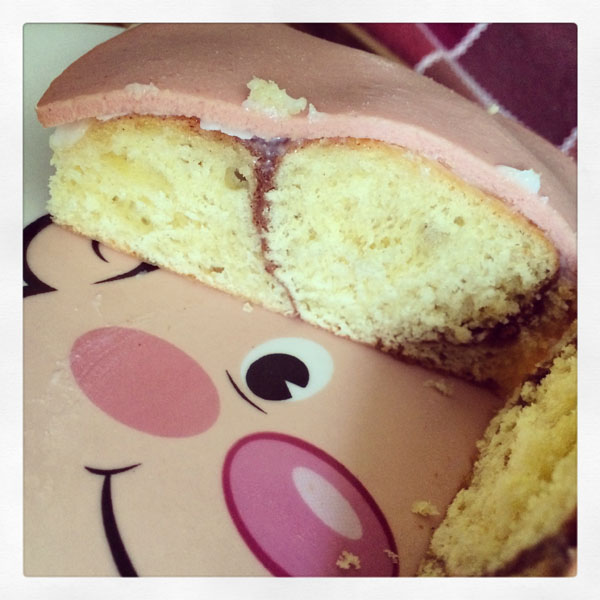 I close my eyes and dive in. Hmmm… Wait a minute… This isn’t terrible. In fact, the saltiness of the bologna works well with the savory sweetness of the cinnamon roll. The cinnamon roll actually overpowers any actual bologna flavor, letting only the salt and smokiness play a rather successful supporting role. I’m pleasantly surprised, and a little freaked out. Next. 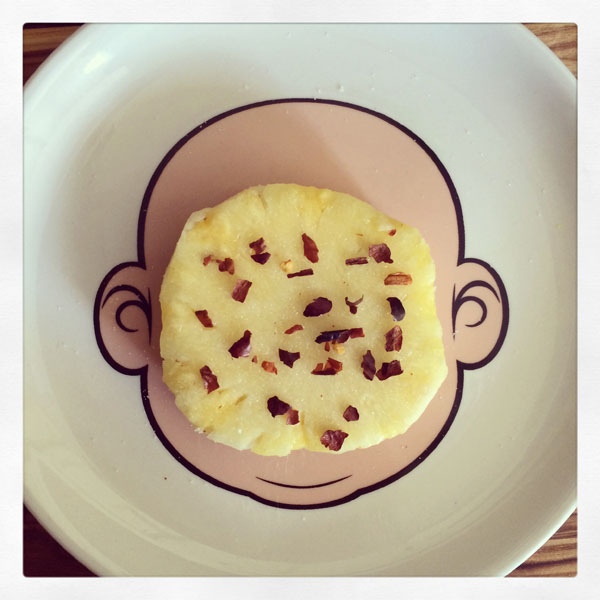 I’ll be honest… I thought this combo seemed a bit out of place in this contest. On paper, the mixture of sweet, salty and spicy seemed like a slam dunk, game over. However, this was a dish suggested by the same ilk that voluntarily puts bologna on cinnamon rolls, so I was still a bit skeptical. Parts of the palate we’ll be hitting: sweet, salty, spicy. Gag factor: Low. 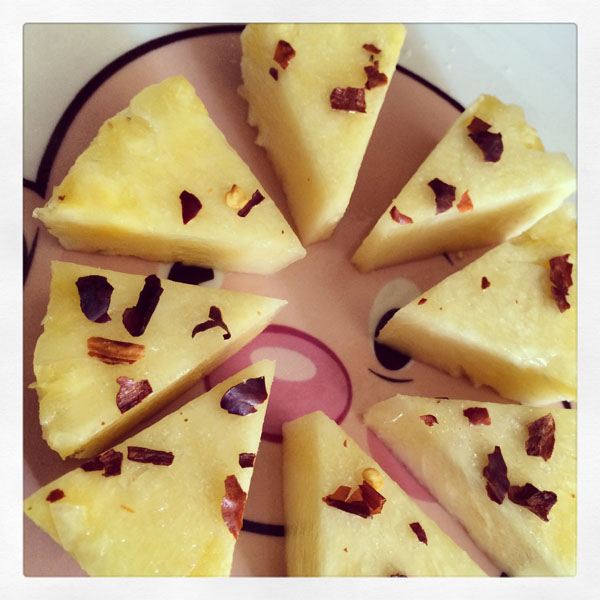 Ooh… Wait a minute. I’m thrown for a loop here. Rather than enhancing the inherent sweetness of the pineapple, the added ingredients dull it down, and it all becomes a bit bland. If I had to point fingers as to who’s responsible, I’d say it was the salt. I double-checked these results with an untainted piece of pineapple and it was confirmed that this combo does not work. A disappointment for sure.

Now… I know this episode of Munch Madness may have seemed like a mismatch on paper. And some of you who filled out your brackets might have bet the farm on the pineapple ensemble — I know I would have. However… We have a BRACKET BUSTER!!!

In the spirit of everything that is good about bracketology, there was one entry that entered the tournament with low expectations but stepped up and delivered — like the George Mason University of foodstuffs. While another strolled in as a one-seed, expecting a clear path to the title. 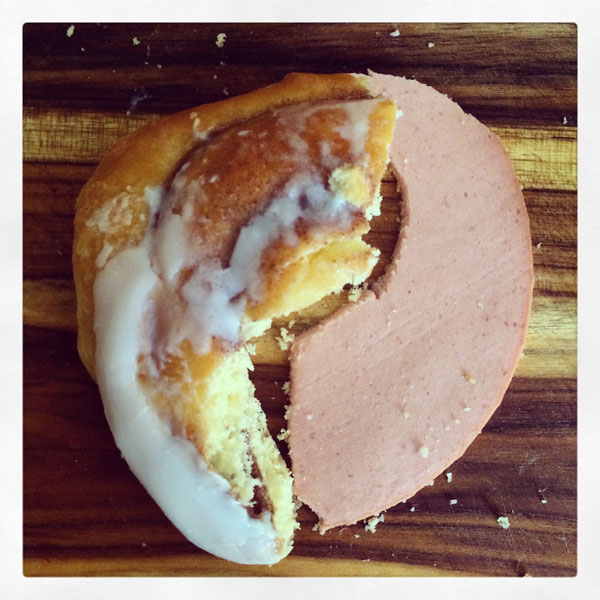 Sorry, pineapple with sugar, salt, and chili… You’re out. Bologna on Cinnamon Roll wins, and appears to be a team of destiny. It’s the kind of feel-good story that makes you love March and has you rooting for the underdog. I’ll be wearing my pink and beige for the rest of the tournament. Go, Bologna Roll!!