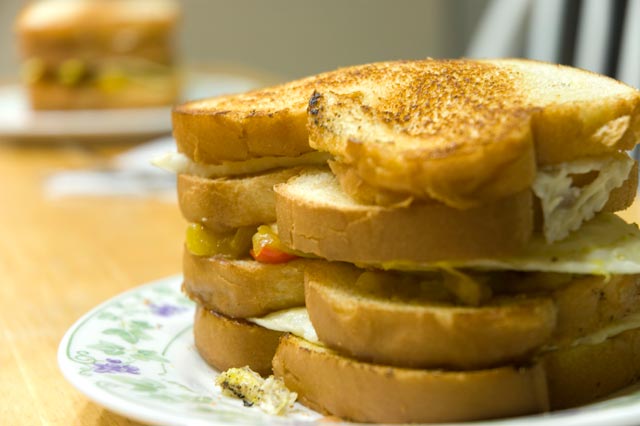 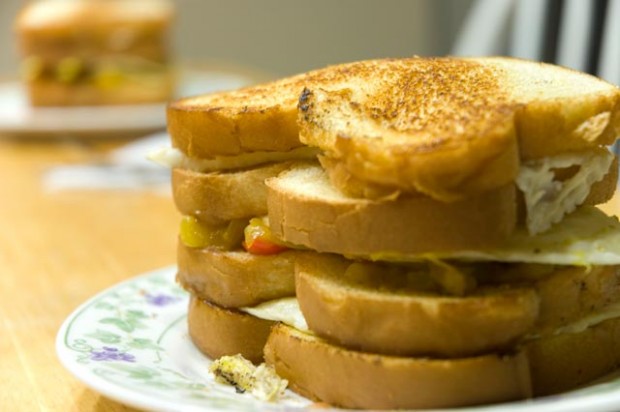 Ten years. That’s how long I’ve waited to try this sandwich. Ten. Years. I don’t think I’ve ever waited ten years for anything, and this is just a sandwich. But deep down, I think I always knew I wasn’t ready. Until tonight.

The triple fried egg sandwich with chili sauce and chutney. The sandwich that is, metaphorically at least, Dave Lister.

Red Dwarf has been on my mind more lately than usual because of the art show. Out of nowhere today, I remembered something about a sandwich, paused to consider the context, instantly came up with the episode title (yeah, that worried me a little bit, too) and viewed a clip to verify that the recipe was as simple as I remembered. Sure enough, it’s nothing but a triple-decker fried egg sandwich with chutney (presumably mango chutney) and chili sauce.

Oh, but it’s so much more. The scene in question kicks off about four and a half minutes into the 1988 Red Dwarf episode “Thanks for the Memory,” which you can watch here, to give you an idea of why the sandwich is so intriguing. In case you’re at work, or just not the video-watching type, here’s my clinical transcription of the dialogue that takes place around this gourmet masterpiece: 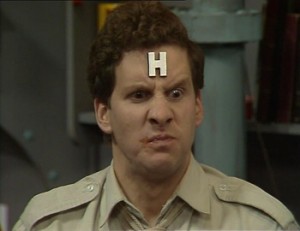 RIMMER: I feel like I’m having a baby!
LISTER: It’s good, isn’t it?
RIMMER: It’s incredible! Where did you get the recipe from?
LISTER: I can’t remember. I think it was a book on bacteriological warfare.
RIMMER: It’s like a cross between food and bowel surgery.
LISTER: It’s well naughty. The trouble is, you’ve got to eat it before the bread dissolves.
RIMMER: I could never invent a sandwich like this, Lister. You see, all the ingredients are wrong. The fried eggs, wrong. The chutney, wrong. The chili sauce, all wrong. But put them together and somehow, it works. It becomes right. It’s you. This sandwich, Lister, is you.
LISTER: What are you saying to me, Rimmer?
RIMMER: You’re wrong, right? All your ingredients are wrong. You’re slobby, you’ve got no sense of discipline, you’re the only man ever to get his money back from the Odor Eater people. But people like you. Don’t you see? That’s why you’re a fried egg chili chutney sandwich. Now, me—now, me, all the ingredients are right. I’m disciplined, I’m organized, I’m dedicated to my career, I’ve always got a pen. Result? Total smeghead despised by everyone except the ship’s parrot. And that’s only because we haven’t got one. Why? Why is that?
LISTER: I suppose it’s because you are a total smeghead.

This is a culinary concept with which I’m all too familiar. There are plenty of ingredients out there I’m just not generally keen on, no matter how hard I try to grow myself up about it—mustard, horseradish, and sliced pickles, to name a very specific few. But put them together (especially in sandwich form) and as if by magic, they become something even I can’t argue with.

Food is cool, I guess is what I’m getting at. It’s never basic addition, you know?

So anyway. It finally felt like the time was right, and I whipped up my first triple fried egg chili chutney sandwiches for four. In a way, sharing it helped bring the experience to life, because you know that confused-and-disgusted face that you saw Rimmer make? I got to see a lot of that face once all the ingredients were out on the counter. Jenny hovered at the edge of the kitchen, marveling nervously at the idea of mangoes with eggs, saying things like, “I don’t understand what all that extra bread is for,” and “Wait, you’re putting another egg on it?!”

Damn right I’m putting another egg on it. One dozen eggs, that’s how many went into our dinner tonight. One dozen eggs and an entire loaf of white bread. (I should probably work on eating a vegetable tomorrow.)

We all dove in together, and a moment of naked disbelief followed the first bite. It wasn’t weird. It should have been weird, but it wasn’t. It was heavenly. Sweet chutney, curry, runny egg yolk, and salty buttered bread all came together in one spectacular I’m-never-eating-another-egg-sandwich-unless-it’s-this-one mouthful, and before we knew it every bite was gone, and we were left discussing how apropos the comparison to surgery really was. But not in a bad way. This sandwich could not have better lived up to my expectations. 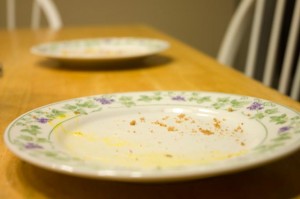 I know how it sounds, and boy, did I have my doubts (for ten years), but you have to try it. That’s all I can tell you. It’s up to you now.

The following chutney recipe is adapted from Alton Brown’s. The rest is born of common sense.

The Triple Fried Egg Butty with Chili Sauce and Chutney