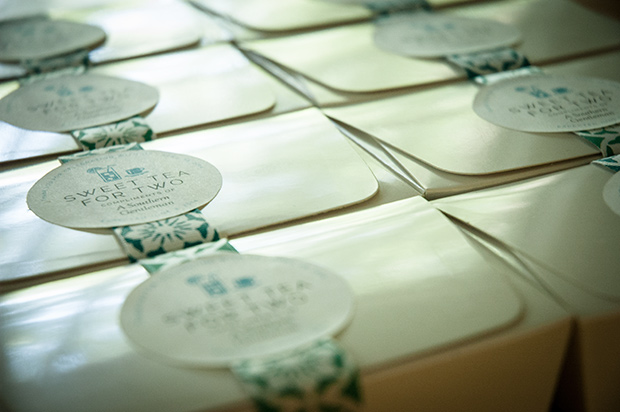 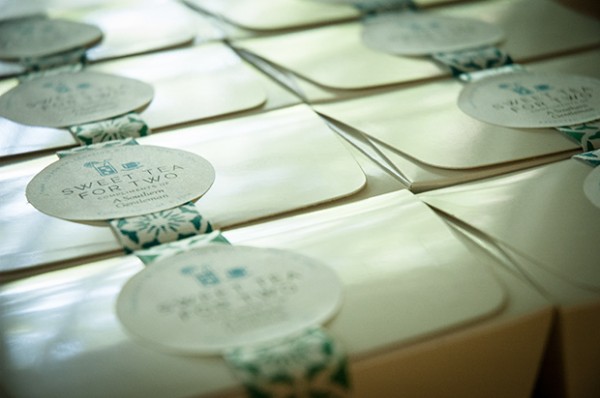 As the baby-free days of Knuckle Salad continue to dwindle, benchmarks slip steadily behind us—including Mr. Baby’s shower, as hosted by our darling friend Jenny.* She is an extraordinary event planner, and we thanked her by making her job the most difficult it could be. She selected a lovely location and theme, and all she needed from us was a guest list. And then we were like can’t we just have it at the house and maybe this theme instead and we want to serve food and booze and please no games and how about a co-ed party but part of the family would like a separate ladies’ shower and basically we just messed everything up as badly as we possibly could. We didn’t mean to but we absolutely did. We didn’t even give her a guest list, at least not for like, two or three more weeks after she’d asked.

And what did Jenny do? 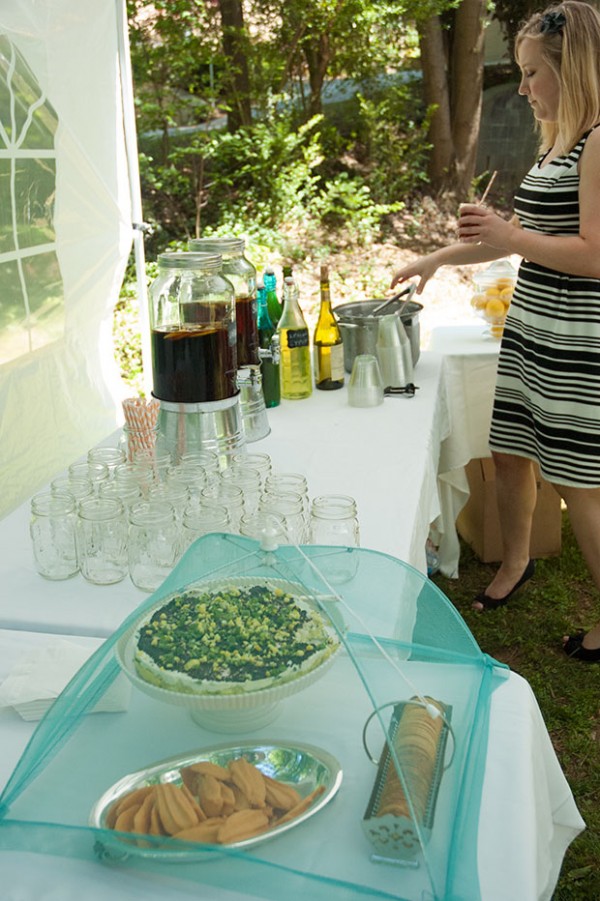 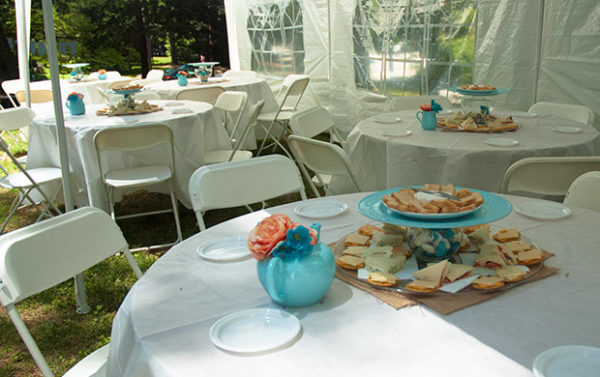 I tried to contribute little helps along the way, and one thing I made myself wholly responsible for was party favors. There were a lot of possibilities but I knew that with everything else going on, it was important to keep it as small and simple as I could. All I wanted was a very modest memento of the day, which we called “Garden Party for a Southern Gentleman,” where we served lots of iced tea (sweet, spiked and regular) in (what else?) mason jars.  In the end, I decided everyone should have a little box of sweet tea to make at home, as inspired by this project from Martha Stewart: 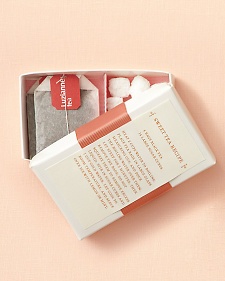 The article was pretty light on instructions, but looked easy enough from the photo. Originally, I planned to make my own sugar cubes in flavors and shapes and colors, but after a couple sorry attempts I decided it’d be a lot nicer with plain, uniform ones. I ordered a case of these boxes in white from Papermart, in the 4 1/8″ x 2 5/8″ x 1 7/8″ size, which nicely fits a pair of teabags, a handful of sugar cubes and a custom-wrapped chocolate (which my mom ordered—how cute are they?). Martha’s project specifies a different box from a different company, but the minimum order there is a case of 100 for $40, and the box I chose was available in cases of 50 for under $17. Plus it came in a sweet trapezoidal shape. Either one may work for you. 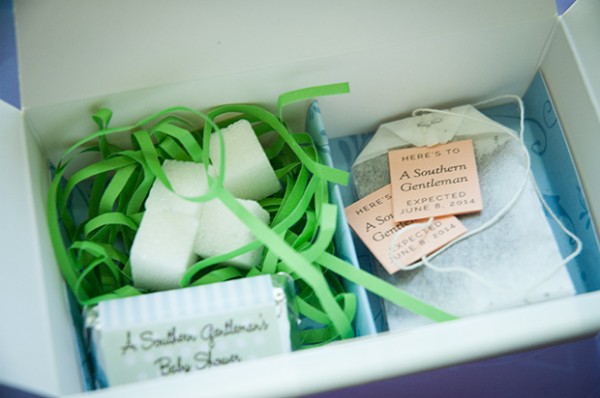 Since the original article doesn’t have much to say, here’s a rundown of what I did (it was very simple): 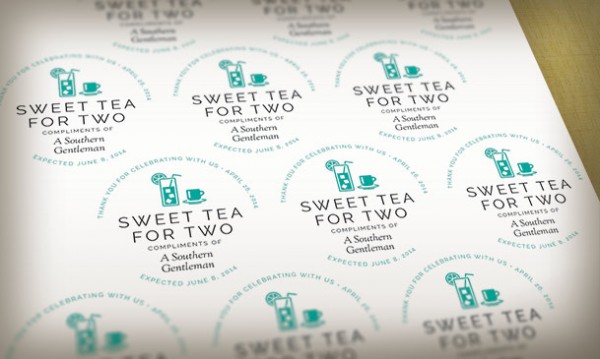 If you’ve got a shower coming up and want to go with a handmade party favor, I recommend something simple like this, because when you have a bunch of something to make over and over, even just a few steps can start to feel like a lot of work. I also recommend remembering to set the party favors out where everyone can see them, so that half your guests don’t leave empty-handed before you remember the favors are on display in a corner of the dining room, out of the sun, where you thought they’d be safer because the chocolate wouldn’t melt.

As for the thing you have to do right after a shower, just as an aside, it’s fun to grab a box of David Tutera cards and some rubber stamps. Sure, you can use that brilliant service that prints and posts your thank-yous automatically and saves you loads of time, but it’s not quite as personal as a handwritten note and you don’t get to play with inkpads. Either way is great, though, so that’s your call. 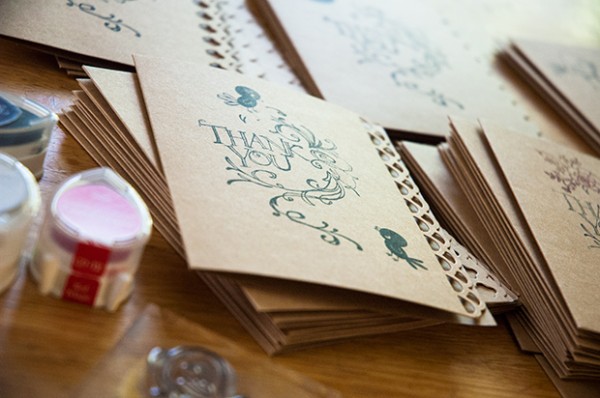 Aaanyway, if you’re in a position where you’re likely to have a shower thing happen any time soon, I wish you the nicest possible day and the best possible family and friends, just as we had. We’re grateful to have so many wonderful people in our lives, and we’re happy for our lucky little baby, who will have so much love and fun all around him. That is, unless everybody avoids us from now on because kids are messy and loud and this one comes from inkpad people.

I guess I wouldn’t blame them.

*Special thanks also to John’s sister Diana, who handled invitations for family, and baked beautiful cupcakes until she almost died of baking beautiful cupcakes. So very many cupcakes, and so much love to Diana—and all the friends and family who offered their kind help, and food, and baby gifts!

Check out the inspiration pinboard we built while preparing for the Southern gentleman’s party for lots of cute ideas, only some of which we used. :)