You know what you need? Geeky cocktail recipes. There are a million reasons! Maybe you’ll have your friends over to watch the Doctor Who Christmas special, whenever the BBC decides to air it. Maybe it’s getting close to convention time in your neck of the woods and you want your after-hours hotel room revelry to be fully on theme. Maybe you’ve got some kind of sci-fi-centric art opening coming up in Atlanta next Friday—I mean, who even knows? The point is, you need some recipes!

I may not be much of an experienced bartender, but I am a dedicated experimenter, and I’ve spent a good deal of time developing three yummy cocktails that could totally pass for legit in any bar. I’m going to tell you up front that one of them is a viable Earth version of the pan-galactic gargle blaster, but I’m not going to get to that immediately. Let’s work up to it the same way Douglas Adams worked up to The Hitch-Hiker’s Guide to the Galaxy: by setting our sights on Doctor Who.

A Screwdriver is already a drink. Vodka and orange juice. So this one’s fairly obvious, and I’m a little surprised it hasn’t been more thoroughly covered. Introducing the Sonic Screwdriver, in two versions—the Eleventh and the Tenth.

Both Sonic Screwdrivers lend themselves to mixing by the pitcher, although you’ll need to be clever about the ice since you won’t be shaking anything. Frozen orange juice makes a nice ice cube alternative for the Eleventh cocktail. For the Tenth, I recommend keeping the whole pitcher in the fridge.

And that brings us to the pan-galactic gargle blaster, which you should absolutely never make an entire pitcher of under any circumstances. I don’t mean to be cliche, but drinking just one of these truly is not unlike having your brain smashed out by a slice of lemon wrapped around a large gold brick. The surprising part is that although it will numb your mouth on contact, it’s quite tasty, thanks to a few thoughtful fiction-to-reality translations. And it’s satisfyingly blue. I don’t know about that olive, though. I don’t like olives. Mine remained undisturbed at the bottom of the glass, but I’m sure its presence added… something. A sense of authenticity, at the very least. 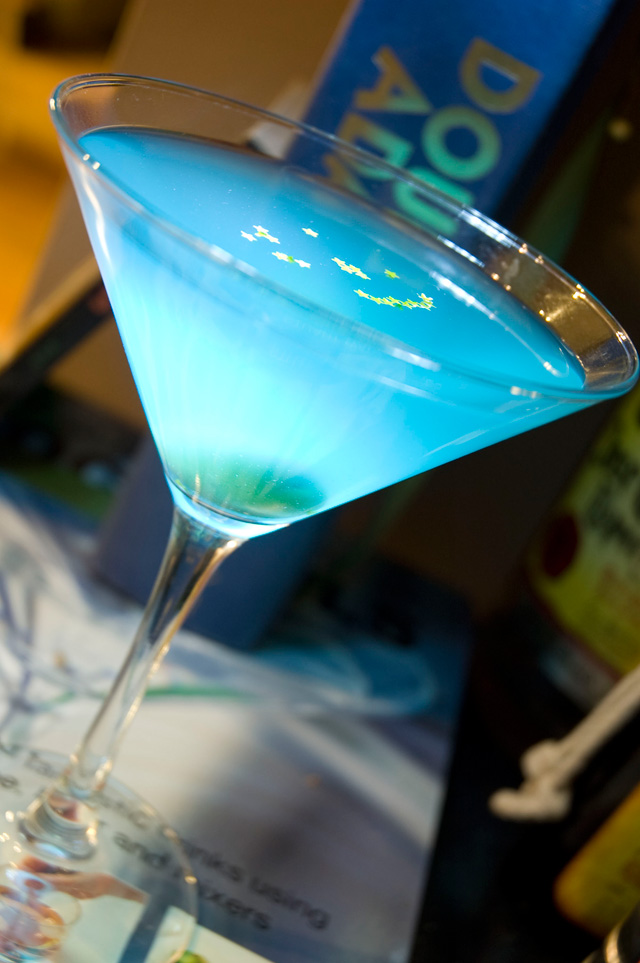 You aren’t likely to have the original ingredients (Ol’ Janx Spirit, Santraginean seawater, etc.) on hand, but you can probably procure these: 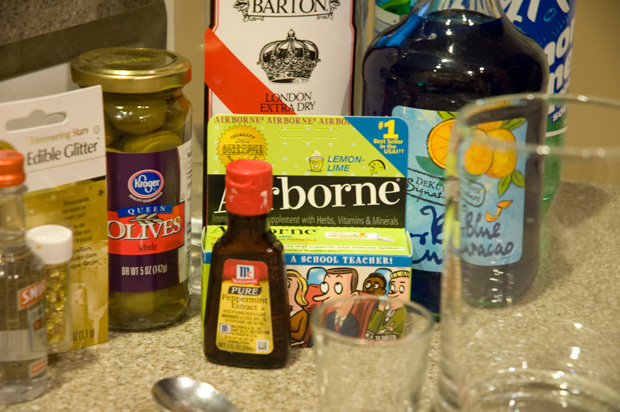 Let’s take a closer look at that glitter. They’re metallic sprinkles, shaped like little stars, which I find heart-stoppingly cute. You can order edible gold stars

from Amazon, or you can pick up the Wilton version (shown) at Michael’s for about the same price. These are an important ingredient, as they serve three purposes: They give you something to sprinkle in place of Zamphour, they account for the “large gold brick” feeling, and they make people think of space. Purpose 3.5: they’re adorable. 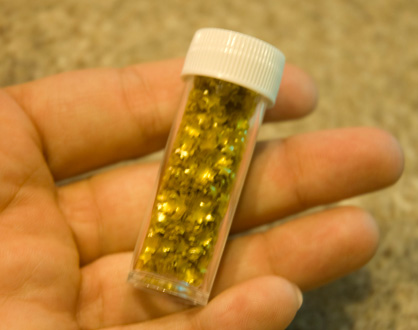 I’ve translated the following recipe as directly as my knowledge of Earth ingredients allows, while still using things that you can conceivably consume together and enjoy. Of course, I would’ve preferred to use something stronger than vodka in place of the Ol’ Janx Spirit, but good luck finding grain alcohol in the tiny airplane bottles. (If you do, I will be so jealous!)

I don’t actually know what will happen to you if you drink a couple of these. It doesn’t seem like a good idea. Surely no amount of immune-boosting vitamins can make up for a cocktail this sweet, strong and bizarre. Everyone should at least taste one, just for the experience—but hats off if you make it through a full glass, you froody thing you.