Munch Madness is back, and this year, it’s all about copycats—those recipes that capture our imaginations with promises of just-like-the-restaurant-version yumminess, with none of the calories/preservatives/expense/need for pants! These recipes can range from spectacular to spectacularly disappointing, and we have identified 16 of the most Pinterest-popular copycats with a view to finding out if they deserve the thousands of pins and repins they’ve earned. Which ones are amazing? Which are worth trying? And which have merely seduced the pinning public with a believable photo and a too-good-to-be-true caption? With the help of our panel of expert judges, we aim to find out.

At this moment, our Sweet 16 judges are making, tasting and testing the recipes that will vie for the copycat crown. Now’s your chance to fill in a bracket for a prize, before our March 22nd deadline. To keep up with the action after that, consider following either the Knuckle Salad Facebook page or G+ page or subscribing to automatic email updates (see sidebar). 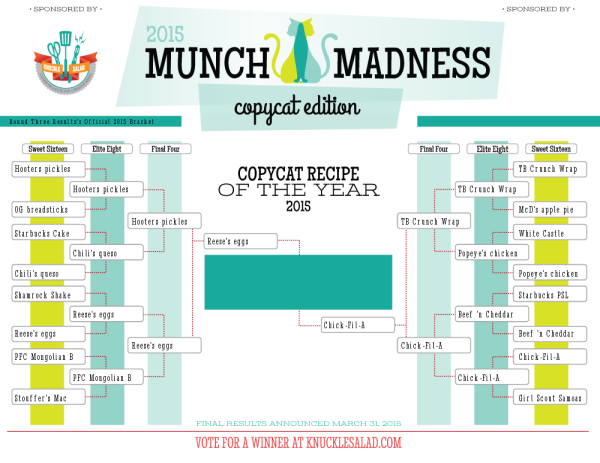 Vote in the poll in the sidebar to make your voice heard in determining the BEST Copycat Recipe on Pinterest! (You may vote once per day.)

Your 2015 contenders claim to be very near approximations of the following recipes. Here they are, seeded in order of Pinterest popularity:

Copycat recipes for these 16 recipes are among the very most repinned on Pinterest. Thousands of people have saved each one with the apparent intent of trying them. How many people actually have tried them is impossible to say. For all we know, we could be the first! [divider][divider]

There will be two lucky winners this year. Well, I’m calling them lucky, but as a matter of fact it’s all skill. Skill and…no, OK, probably a little bit of luck. Skill, a little bit of luck, and the wisdom to follow along, vote, and submit stuff when I say you should.

The first winner, as every year, will be the reader who submits the highest-scoring bracket prediction at the beginning of the tournament. The second winner will be the author of the winning recipe. (In the event that we are unable to contact either winner, the prize will be offered to the respective runner-up.) Prizes for each of these winners will be announced soon! [divider][divider]

Entries are closed for prize eligibility, but you can still use our prediction page to create and download your bracket to follow along!

Your 2015 judges are a diverse group, very carefully selected. Some are returning judges from previous Munch Madnesses, some are brand new, and some are me again (and John). Introducing your 2015 judges and judging teams:

Vote in a Winner

Vote in the sidebar! [divider][divider]