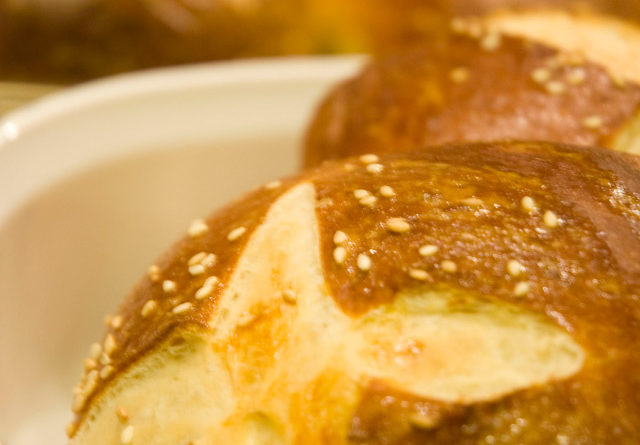 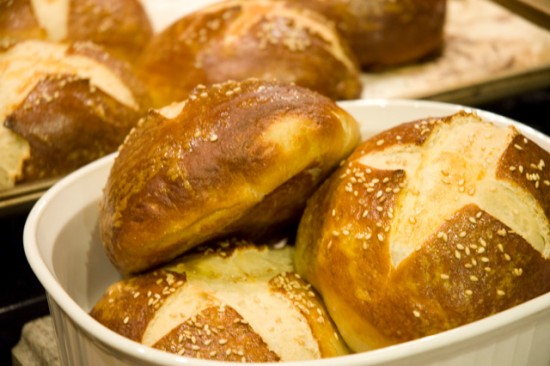 Our dear friend Njicki, who moved away a few years ago, knows a couple who has just moved to Atlanta from Boston for work. She mentioned this to us on Monday. Would we, she asked, like to meet them?

Any friend of Njicki’s is a friend of ours, so we couldn’t wait. Coincidentally, we had been trying to schedule the next round of Experimental Dinner, and I thought (looking back, I’m not sure why I thought this; I’m beginning to suspect I’m an incompetent hostess) that the new Boston couple might be more comfortable meeting six or seven new people at once instead of just John and me. And so it was! Dinner at our place, seven o’clock on Wednesday.

Yeah, it was short notice. I couldn’t help it. I was excited.

I planned a casual experimental entree and dessert. The entree was going to be a bratwurst burger on a pretzel bun with maple-mustard glaze, and the dessert was going to be a chocolate haystack with a half-cherry on top, filled with liquor and set alight like a tiny campfire. The burger turned out beautifully. Its only flaw was that I slightly overshot the measurements, and we all ended up with burgers the size of a Smart Car.

The special-effects dessert, on the other hand, did not work at all—who knew a tiny thimbleful of vodka wouldn’t be enough alcohol to catch fire?—so it was a good thing some of our guests had brought desserts. And on the bright side, there’s no such thing as a bad chocolate haystack, even if it isn’t on fire. Of course, our friend Zack, disappointed with the impotence of my pyrotechnics, ended up burning part of his haystack with the grill lighter while trying to force the cherry to go up. It never did, although he swore the burnt edge of the haystack was the tastiest part. 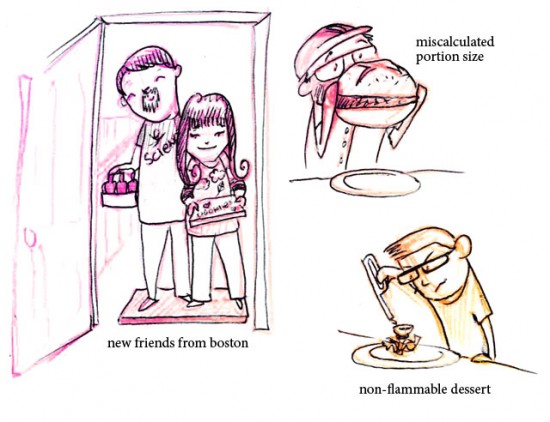 We all spent a delightful evening eating, chatting and comparing stories of horrible drivers around the world. The couple from Boston was lovely and didn’t seem at all overwhelmed by my probably-idiotic idea to toss them into a room with a bunch of strangers. Someday I’m sure I’ll tell you more about them, but I didn’t actually mention that I was considering posting about any of this, so for now I’m withholding their names and all the interesting details I’ve learned. If you’re able to recognize them from my doodle, then I imagine they wouldn’t have been able to hide from you for very long anyway.

So. Dinner. Recipes. The burgers were sensational (if I do say so myself) and I’ll be posting that recipe in the near future, but for today, I’d like to shine a reverent spotlight upon the glorious all-purpose pretzel roll. It’s a wonder! It’s soft and dense but not heavy, and it has a firm bite without being chewy. Add a sprinkle of pretzel salt and it tastes just like a baseball stadium. Well, not the stadium itself, obviously. Not like licking the bleachers or something. Don’t be gross. 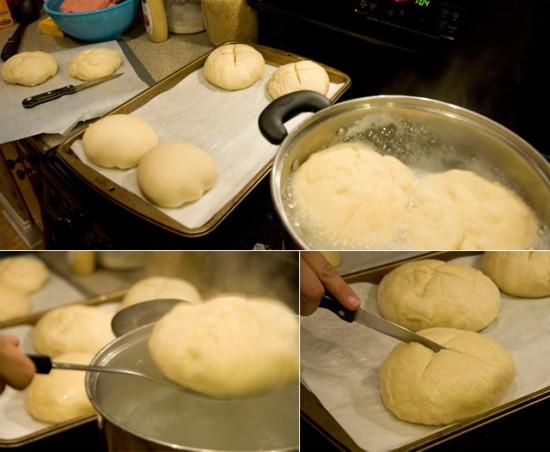 I only had about an hour between work and dinner, so John and Diana volunteered to prepare the pretzel dough ahead of time. The way they executed this recipe, you would never have known they weren’t 100% comfortable in the kitchen. In fact, they only called me at work to ask a question once. Granted, the question was in regard to the first part of step one (“Put the water in the bowl”), but after that, it was smooth sailing.

They made two batches. The first one was taken out of the bread machine as soon as it was mixed, then left to leaven the old-fashioned way, in a covered bowl in a warm corner. The second batch did the full dough cycle in the bread machine. I was surprised at the difference between the two batches: the first was smooth and almost plasticky in its nonporousness, and the second was also smooth but in a much more delicate and velvety way. Like a whale. 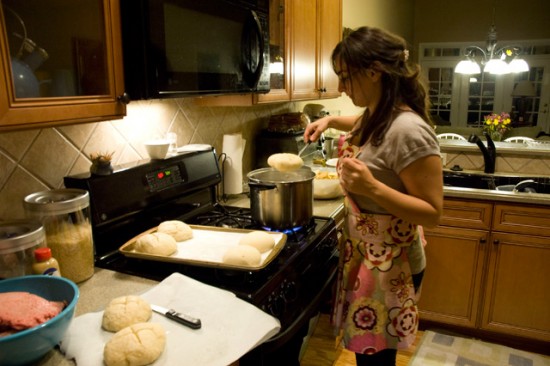 Since our recipe was for pretzels and not rolls, we weren’t sure how many we’d get from it or how big they’d be. The original yield was eight soft pretzels, so we reasoned that we’d need to double that to make eight rolls. We were incorrect. The rolls were massive. You know when you go to a restaurant and you love the food but you think, “This would be perfect if they’d just serve me half as much food and charge me a little bit less”? This is the kind of sandwich roll you get at that restaurant. It’s clearly too big, but you try to eat it all anyway, because it’s so good. And then you feel like you might explode on the way home, scattering pieces of your organs and eyes and toes all over the pavement. 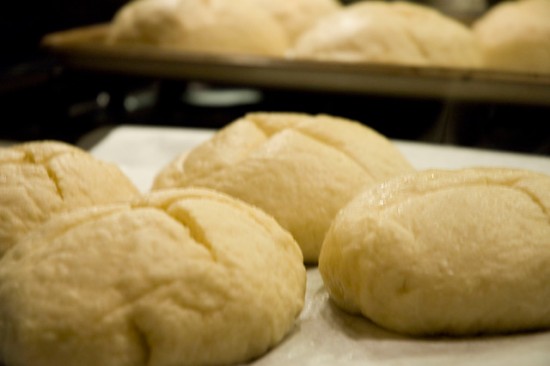 Miscalculations aside, the pretzel process was easy. I shaped the dough into balls, boiled the balls in a baking soda bath, and baked. They didn’t take long at all. In fact, I think the bratburgers took longer, which may have been because I tried to make them enormous enough to fit on the rolls.

I can’t wait to make some correctly-sized pretzel rolls and try them with other things. I’m eager to make one into a peanut butter and jelly sandwich, although I suspect I’ll have to slice it a few extra times and make some sort of triple-decker PB&J out of a single roll. Don’t tell John, though. For some reason, he seems to think I’m clumsy and reckless with the kitchen knives. I don’t know why he thinks that. I mean, it’s true, sort of, but I don’t know how he found out. I’m usually so good about cleaning up the blood.

This recipe is based on Alton Brown’s very popular pretzel recipe. Don’t worry—I’ve adjusted it to reflect the size of the rolls we should have made.
[recipe]