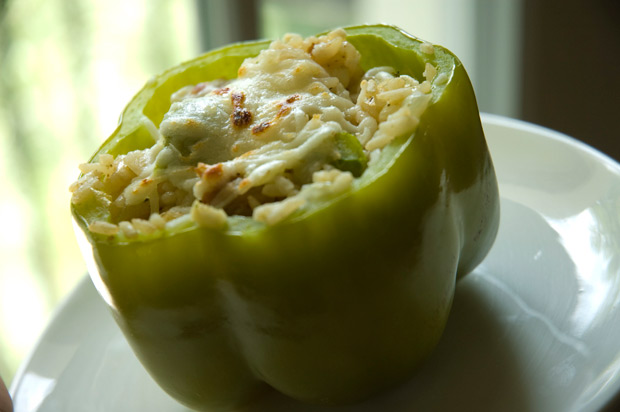 The astute among you may notice that the recipe I’m presenting below is virtually the same recipe as this, only rearranged and served in its own little shell. And you are so right! But this new version isn’t all about gimmicky serving suggestions or getting extra blog-mileage out of one simple recipe.

Around here, when a recipe is as simple as sausage and peppers, we make large quantities with the intention of a second meal. But when a recipe is this delicious, we tend to go overboard eating it, loading up our plates and returning for seconds. We end up with not quite as much left over as we’d intended, and we feel awfully full. So this v2.0 of an old recipe is about portions. And controlling them.

Portion control. I know. If you’re anything like me it’s the kind of thing you know you should think about, and you mean to, but you usually don’t until it’s too late—like making sure there are no wheelchair-bound patrons in the restaurant before you visit the restroom, knowing you’re apt to choose the handicapped stall even if there’s another one vacant. Um, or something less specific that more people probably think about. I definitely don’t use the handicapped stall ever, not even if all the other stalls are on fire. 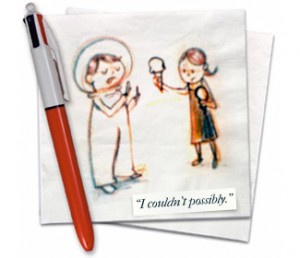 The thing is, I’m worried about bringing up portion control and having people think I’m talking about dieting. I disapprove of dieting for two reasons: One, by its nature it’s temporary, and temporary lifestyle changes don’t make sense (Have you met my wife? We sleep in separate rooms every year before swimsuit season), and two, I’m pretty sure that worrying about getting fat makes you fat. All that careful planning never really works the way it’s supposed to, and instead, you analyze everything until you get so tired of thinking about it and denying yourself delicious things that you rebel, and that rebellion often comes in the form of donuts. Donuts you didn’t even want. And that kind of donut has like three times the calories of regular donuts. Look it up.

Me, I’m not cutting back portions because of dieting. I could stand to lose 10 or 15 pounds, but I’m not working hard to make it happen, and I don’t beat myself up about it. I figure if I keep trying to live better, it’ll happen naturally, and that’s when I’ll know I’m on the right track. In the meantime, I know I’m not fat—which feels crazy to say, because now I’m wide open to criticism that my ego doesn’t need to hear. (Did you see on Kristina’s blog where she said she’s not fat? Omg denial.) But I’m trying to be honest and objective. For a 28-year-old graphic designer who doesn’t exercise and loves to cook, I feel pretty good and I think I look okay.

Objectivity doesn’t come naturally, although for me, it gets easier the more I force it. It’s a conscious effort look for something I like in the mirror instead of zeroing in on all the ways I’m not a cover model. I think everybody kind of deals with that (even cover models), but what sort of puts it into perspective for me is group photos. See, in a picture with friends, I’ve noticed that the first thing most people do—most women, at least, but a lot of men too—is viciously critique their own looks. I catch myself doing it all the time, and man, it can get rough. Then, what a lot of people want to do next is announce every flaw they can spot, probably for the same reason I hesitated to describe myself as “not fat” on the Internet: so that no one else feels compelled to point out the unspoken negative stuff, because it’s harder to hear it from someone for sure than it is to say it yourself and be uncertain whether everyone else is being truthful when they say, “Shut up, you look good.”

I don’t mean to accuse you, but you probably do this.

Deep down, you know you’re the only one who’s looking at that picture and noticing the pudge above your waistband or that your knees are looking dumpy, but you can’t help wondering if that’s how you look to everyone. Your friends look at the same picture and say you look cute, which you take as confirmation that you’re a mutant, because why else would they lie to shield you from the awful truth? Meanwhile, they’re looking at the same photo and noticing the bags under their eyes and their belly buttons showing through their shirts in an unattractive way. And you know what else they’re doing? Comparing themselves unfavorably to you. Whatever attribute you rarely bother to notice in yourself, that’s what your friends envy. (And you know what’s worse? While you’re moaning about your dumpy knees, you probably aren’t checking to make sure your friends’ knees aren’t dumpier than yours. You probably just gave them a knee complex. Some friend.)

So even as you’re looking at yourself and seeing the tired, fat raccoon (fig. 2), to your more objective friends, I bet you’re in a different league altogether—maybe somewhere between them and the cover models.

All I’m saying is that body image is a bitch and I hope you’re not being too hard on yourself. What were we going to talk about? Peppers?

This variation on my sausage and peppers recipe ramps up the veggie ratio, takes control of portions, and looks very cute, all at the same time. It makes it easy to serve, easy to put away for leftovers, and easy to reheat. And since stuffing the pepper makes it so easy not to stuff yourself, you might feel better and lighter after dinner… and have more room for dessert. (Be nice to yourself.)