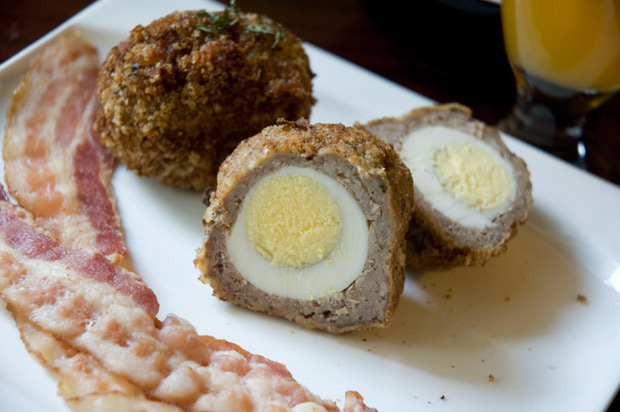 I know there are a million different foods, maybe a billion different foods—maybe a trillion!—that I don’t know about. There are vegetables I’ve never encountered, cuts of meat we don’t see around here, flavor combos that don’t seem intuitive to me but are probably really popular somewhere else.

But this is just an egg with sausage on it.

Give it to me straight, people of Earth: how can entire modern cultures see Scotch eggs on the shelf every time they pop into the grocery store, but I have never heard of them in all my 28 years? I have eggs! I have sausage! I already eat them together! And I know about frying, so nice try. How’d you do it? How did you keep something so simple a secret?

The news was shocking. I reacted the way I expect anyone would: I bought a tube of sausage and invited my friends to brunch. I was relieved (but further puzzled) to find that no one else had ever heard of Scotch eggs either. So we embarked on our adventure together.

First, they’re a lot of work. Boil eggs, peel eggs, dry eggs, season sausage, flatten sausage, wrap sausage, dredge in flour, dredge in egg, dredge in bread crumbs, fry. Even pancake mix is too much work for me on a typical Sunday, but this is an experiment, so that’s beside the point.

They taste…pretty good. I mean, if you like sausage. Fortunately, my friends do. They’re super salty—the eggs, not my friends (probably)—and kind of dry. I read that you can soft-boil them but that it’s less common and more difficult, and I was shooting for authenticity and foolproofery. Sausage gravy helps with the dryness, though. The outside of the eggs is crispy and the inside is eggy, which is nice. But can I just tell you? This has to be the heaviest thing I’ve ever eaten for breakfast, and that includes the times I’ve ordered breakfasts with French toast on the side. I was only able to eat one.

I mean, sure, that might have something to do with the fact that John spent the morning frying bacon. And I made hash browns. Oh, and… 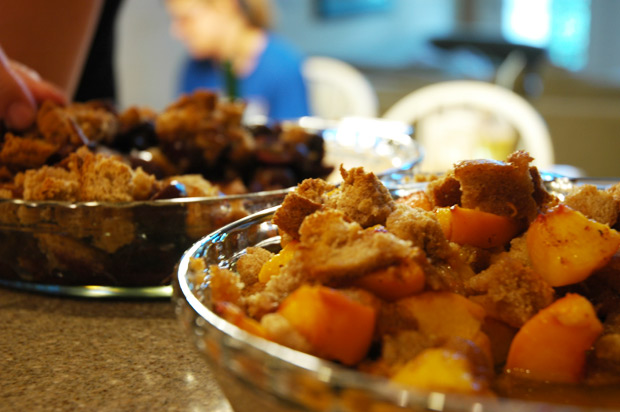 Brown betty? You betcha. With the help of Jenny and Diana (a premiere culinary team!), we baked up a cherry brown betty, as well as a peach one using the same recipe—we just replaced the cherries with peaches and the cinnamon with nutmeg. I thought the super-crazy-sweetness of the peach one was a little too much, but the cherry one was just the thing to balance out salty sausage-eggs and bacon. 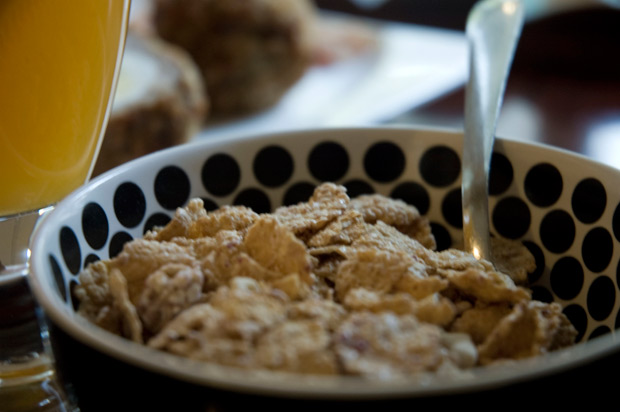 You’re going to think I’m crazy now, but yeah, cereal. Because I had some. Kellogg’s had sent me samples of two of their FiberPlus Antioxidants cereals (it was part of the FoodBuzz Tastemaker program… they send me stuff sometimes, and I love mail) so out came the Berry Yogurt Crunch, which I like slightly better than the Cinnamon Oat Crunch. The latter is pretty good too, but it’s really, really cinnamony. John loves cinnamony. He finished most of that box, I think. But I found the berry yogurt one lighter and crispier and easier to eat. The moment I opened the box and a puff of sugary-sweet air hit me in the face, I thought I was going to hate it, but it mellows out in milk and I ended up really liking it after all. So… you know… why not?

We poured everybody a glass of champagne and apple juice—the morning cocktail that has totally devastated mimosas in our social circle, thanks to our friend Pura and a group called The Big Bounce—guaranteeing we wouldn’t see anybody off the couch for the rest of our Sunday. And isn’t that why brunch was invented?