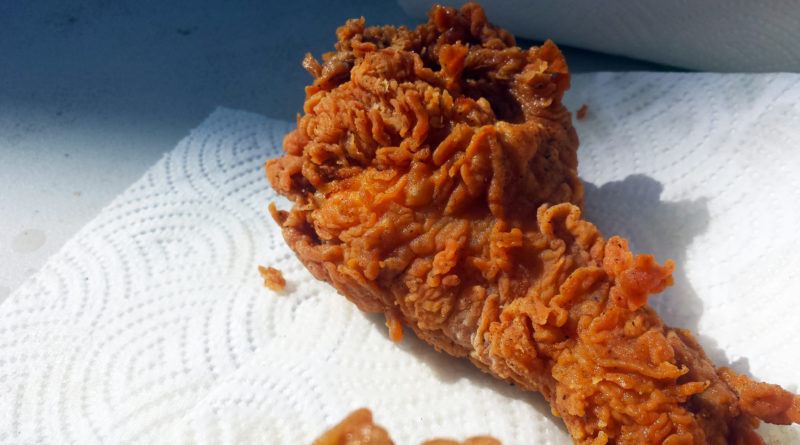 Jim Behymer of Sandwich Tribunal takes us on a journey through the process of copycatting Popeye’s spicy chicken, a recipe popularized on Pinterest by Fantastical Sharing of Recipes (which appears to have been published via Meg’s Everyday Indulgence, but originally developed by From Away).

Man I love me some fried chicken. And when that fried chicken jones hits me, Popeye’s spicy chicken is my jam.

@stereowilliams spicy, all thighs, and no thanks on the hot sauce, I brought my own. cc @PorkAndAlcohol

OK, I’m also pretty likely to hit up Harold’s Chicken Shack if there’s one nearby, Brown’s isn’t bad (except for the one near my house, which is wretched) and there are times when I miss the days when I worked at KFC and I’d get to bring home a bunch of free food every night.

I’ve gone too far. I don’t miss that at all, ever. It’s been 20 years and I still have nightmares about cleaning grease traps.

Still, when I saw that one of the recipes available for Munch Madness was a Popeye’s Spicy Fried Chicken clone recipe, something that I eat once or twice a month, it seemed like a good fit. And though I’m more known for my sandwich skills, as I told my sister on Facebook recently, “booze and fried chicken are also within my basic area of operations.”

Booze will be featuring in this post again, so that’s a bit of clever foreshadowing there. Damn, I’m a shit-hot writer.

Ways in which I maybe skirted the intent of the recipe author #1: She calls for skinless chicken breasts or tenderloins. I don’t dig on breasts or tenderloins at Popeye’s (see above tweet). Give me your chicken thighs, your fatty bits, your dangly pieces of crispy fried skin. So for this post, I cut up whole chickens instead.

Ways in which I maybe skirted the intent of the recipe author #2: She specifically mentions Frank’s brand hot sauce. Which is fine, but around here (“here” being my kitchen) we use this:

Apart from those two very minor changes though, I tried to closely match both her recipe and technique.

To cut a chicken into frying pieces, I bend the legs against the joint until they pop out, then cut through. I do the same for the wings, and fold the wing tip under.

I cut the breasts apart down the middle of the sternum, at which point they are mainly connected to the thighs, ribs, and spine by some easy-to-cut connective tissue and a single bone, which I just kind of yank out. I separate the spine from the thighs with some shears or a really big knife. This results in 8 pieces per chicken, which is fairly standard for fried chicken chains. If the breasts are too humongous, sometimes I’ll cut them in half so they’ll cook quicker.

PROTIP: Save the spine and giblets and little leftover bits to make soup with later! I do this a lot!! My soup deserves all the exclamation points!!!

I put the chicken pieces in a bowl and covered them with buttermilk and let them sit for around 3 hours before removing them. I shook off the excess buttermilk, placing the pieces on a rack over a baking sheet where I seasoned them with black pepper, garlic powder, and salt.

I breaded them per the instructions in the recipe.

This is a messy process, with your hands going back and forth between wet and dry ingredients multiple times during the process. I tried to maintain one dry hand and one wet hand but that didn’t last past the first piece. Even keeping the flour in bags doesn’t help as much as you’d think–my hands and the counter were as covered in batter as the chicken by the time I was done. The weird little smiley-face sponge guy my wife bought got quite a workout that day.

This breading process is fairly legit. The liquids help the flour stick to the meat, and the shaking gives the resultant batter some texture. At the KFCs where I worked (yes, multiple KFCs. *sigh*) we used a very similar flour-wet-flour process, though we used a big trough to hold the flour and wire baskets to shake the chicken pieces, rather than plastic bags.

Our kitchen at home needs to be better ventilated (one of the many projects on my to-do list for this year) and nobody likes it when the entire house smells like fryer oil (I can’t imagine why) so I try to do my deep frying outside. I have a little electric fryer in the garage but doing whole chicken pieces calls for something a little ballsier.

I cranked up the flame on this propane burner pretty high to get the oil up to temperature quickly, and that was my first real mistake. The cast iron of the Dutch oven holds in heat really well, so the oil temperature is slow to respond to adjustments–the oil can continue to get hotter for quite some time even after you’ve turned the gas down. So I ended up getting the breading a bit too dark, resulting in a somewhat bitter flavor.

Also, I figured as long as I’m running the fryer, I might as well make French fries too. My kids do love it when I cook dinner.

That first attempt was only my trial batch though. My family is my first and best audience, but I felt that I should present this clone recipe preparation to some people eminently qualified to judge fried chicken–a bunch of drunks at a St. Patrick’s Day party.

My friend Paul (that’s him below, in the middle of the lower left photo) has a cookout in his back yard every year during Chicago’s South Side St. Patrick’s Day parade. Many members of our homebrew club HOPS! attend this party, as well as some local pro brewers. There’s plenty of beer there, and Paul has quite a selection of Irish whiskey on hand as well. Some of these folks were really excited about trying some fried chicken. Others were a little more laid back about it. Some were just goofs. But the grill was going, the beer was flowing, and there wasn’t a hand present without a drink in it.

I set up in the backyard with a prep table and my frying apparatus, following the same procedure specified by our copycat recipe. This time though I let the oil come up to temperature very gradually so I wouldn’t burn the breading. It took quite some time, and by the time the oil was ready, people were getting fairly impatient.

I was only cooking 3-4 pieces in each batch, so the chicken was consumed in small increments over the course of a few hours.

I got a lot of null-value comments like “it’s great!” but a few people did provide some decent (though occasionally contradictory) tasting notes.

Frying chicken for two or three hours gets a little boring, so eventually I shut off the fryer and joined the party proper. After that, things got a bit blurry.

Here are my own observations about the recipe:

I love fried chicken, and I love a good (cheap) DIY recipe, but frying chicken is a lot of work. Though the results were good, this is not something I’m going to do at home very often. Fast food fried chicken is not terribly expensive, and it’s quick. Now that I have made my own, though, I realize just how crazy salty the chicken from Popeye’s is. Being able to tweak that flavor is a definite advantage. Maybe I’ll pick up one of those wire baskets I keep talking about. Or maybe I’ll just start making the trek to Harold’s instead.