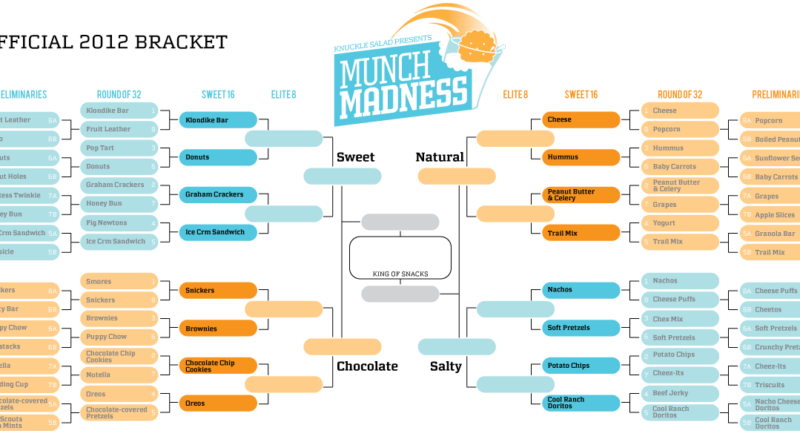 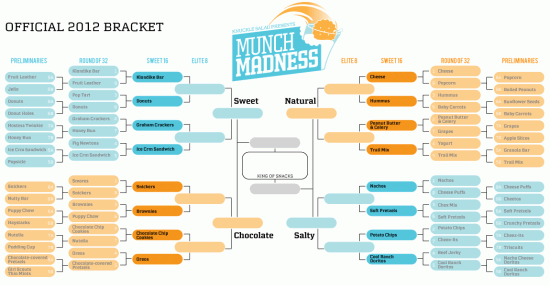 The trouble with whittling a list of 32 fantastic snacks down to just 16 double-fantastic snacks is HEY WHAT HAPPENED TO S’MORES? WHERE’S S’MORES? GUYS! WE NEED TO GO BACK! WE FORGOT S’MORES! S’MOOOOOORES WE’RE COMIN’ FOR YOU BABY!

No, we’re not. That’s the problem. S’mores are lost forever, by a single vote at the very last second of the voting period. I don’t mean to get all Seacrest on you guys, but damn, if you’re a S’mores fan, I really hope you voted yesterday. Those of you who had Snickers in the final are unmoved by this loss; those who expected S’mores to go all the way knew, at the outset, that it was up against a tough competitor, but couldn’t really have been prepared to see it knocked completely out of the game this early. Let’s have a moment of silence for all 16 snacks whose journeys ended with the Round of 32. (If I had a slow-motion clip reel, I’d play it now. Please play it in your mind. With sad music. You can hum if you want.)

But remember, S’mores (or chocolate-covered pretzels, or popcorn, or Cheez-Its) can still be King of Snacks in your heart. The important thing now is what’s going to be King of Snacks in Munch Madness, and if you have a snack to avenge, do it by voting the next best one into the Elite 8. Don’t let your favorite snack get defeated by something stupid like [example of a snack you think is stupid, but which I am prohibited from mentioning by a Munch Madness rule I just made up that states there will be no smack-talk by officials—snack-talk only]. That would be a travesty.

The final scores of the Round of 32:

I was certainly surprised by these margins. I thought cult favorite Nutella would make a better showing than a 15-point loss. I thought Puppy Chow would have more than nine supporters, and Chex Mix and Cheez-Its would have more than 10. But as we get deeper into the competition, the choices get tougher. Going from the Sweet 16 into the Elite 8 is where we’re likely to see some real surprises. Vote your favorites into the next round by 9 p.m. EDT, lest they go the way of the S’more! [Voting on this round has now closed. The next post is about the Elite 8.]