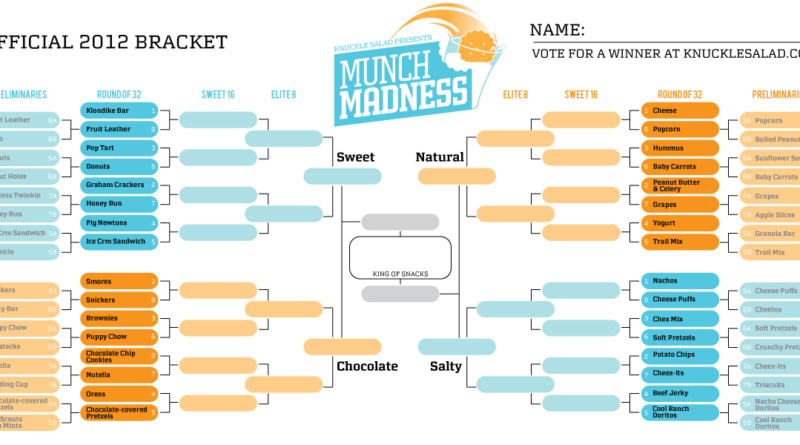 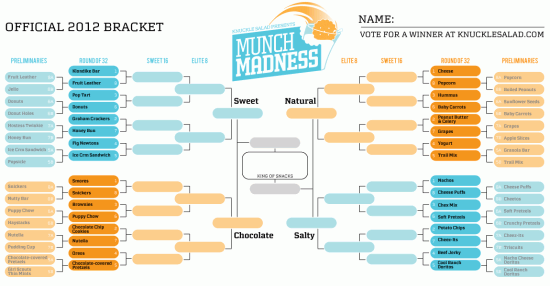 Your preliminary round votes have been tallied, and we now have our Round of 32! Next, vote your favories into the Sweet 16 on Facebook. [At this time, Facebook voting for the Round of 32 has closed. The next post is about the Sweet 16.]

Here are the complete results of the preliminary round:

Are you as surprised as I am? I fully expected the ice cream sandwich to trounce popsicles (it is, after all, my personal King of Snacks pick), but the 38–8 gap is much wider than even I anticipated. I also thought the race between Nacho Cheese and Cool Ranch Doritos would be closer than 25–14. On the other hand, I totally knew crunchy Cheetos and cheezy-poofs would be neck and neck the whole day. So. Called that.

I mean, sort of. It’s probably a coincidence, because chances are, everything I think I know is going to turn out to be wrong. I’m not equipped to predict the choices of snackers in distant regions. Maybe none of us are. After all, how can a cheese enthusiast in the Midwest even conceive of a true Southern beef-jerky-eater? That’s not to say that everyone in the South eats beef jerky, or every Midwesterner loves cheese—that’s a pretty random example because, as I said, I don’t know anything—but surely everyone’s regional culture must influence their snack preferences in some way.

Mind you, it scarcely matters where you live now. I believe that for most of us, snacking habits form early, in the places we grow up. That’s what determines our personal snacking background—our snackground, if you will.

Since making predictions is a big part of this game, I’ve taken the snackademic approach and asked people from various corners of this great nation for their own personal bracket favorites. Their responses should give us some insight into how differently each region’s voters might sway the results. Curiously, of the six people I talked to, no two crowned the same King of Snacks, but you may find clues elsewhere in each bracket to help with your predictions! 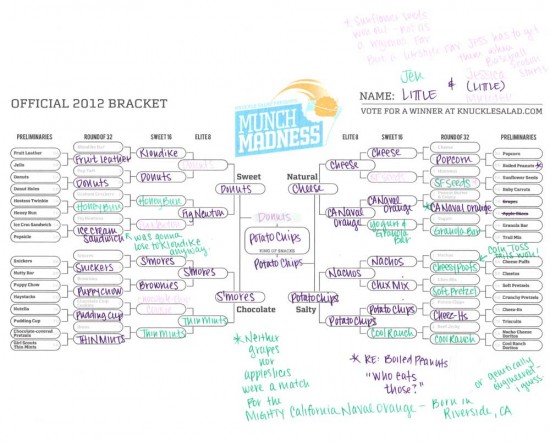 Jen and Jess, raised in sunny California, had some trouble agreeing on their choices. Jen’s favorites are in green, Jess’s are in pink, and items written in purple are the ones they came together on. Note that apple slices and grapes have been stricken from the list altogether (we assume this is allowable under California law) and replaced with “The Mighty California Navel Orange,” which then advances to the Elite 8. Cheese ultimately defeats the orange to take the Natural spot in the Final Four. 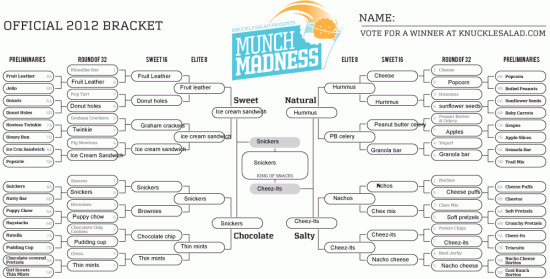 This was tough. My favorites were pitted against each other. Each snack food evoked tender memories… Cheez-Its warmed by the summer sun in a large bowl on the patio. My grandfather cutting up a frozen Snickers bar to share with all his grandchildren. The sweet reward of donut holes for good behavior after Sunday Mass. The revolting way Billy R. used to spit sunflower seed hulls on the floor of the school bus. In the end, though, there was no room in this game for sentimentality. It all came down to flavor, satisfaction, and the power of suggestion. WHY IS MY PANTRY SO DEVOID OF SNACK FOODS RIGHT NOW? —Nicki Smeltzer, March 20, 2012

Note that on this bracket, Snickers battles for an 8 seed and becomes the champion. What an upset! 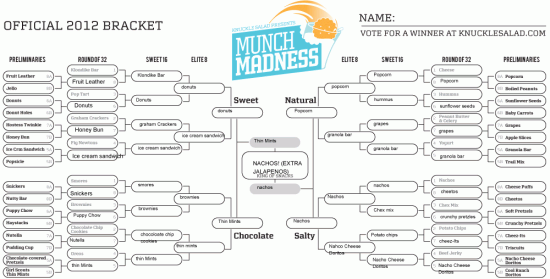 In the Southwest, between sweet and savory, we choose spicy! I don’t give a yeehaw! I give a Naaachooos! —Gloria Chapa, March 20, 2012

What’s that? Did someone say they were giving away nachos over here? 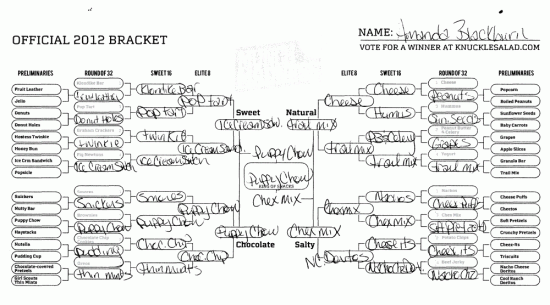 What I noticed as I filled this out is that both of my final choices are “DIY” snacks, and both featured prominently as traditional snacks in my house growing up for holidays. (And both have Chex, which must be like chicken stock for snacks… it’s a fantastic base.) I think traditions and making things by hand are incredibly important where I come from in the Midwest, and food features into both. It’s not Christmas or Thanksgiving without Chex Mix, and I still make it from scratch! And I remember birthdays, Girl Scout meetings and school gatherings where Puppy Chow was always a project/snack. They’re both great rewards for the work you put into creating them, but sweet/chocolate wins every time where I’m concerned!

There may be no more perfect example of regional differences than this: Puppy chow, the chocolate-peanut-butter-powdered-sugar-Chex-cereal treat that many readers have needed to research in order to vote in the preliminary round (including our own Southwest representative, Gloria), takes it all in this Midwest bracket! 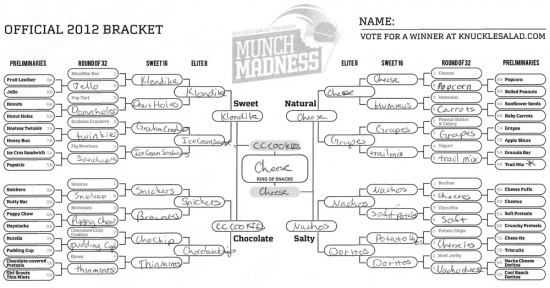 Trail mix was disputed secondary to personal tolerance of raisins, but it was determined that if m&ms were present, a compromise could be reached. Also, the nachos referred to in our chart are real, true nachos. Not with easy cheese. —Krissy Baker, March 21, 2012

Cheese takes it home in Chicago! This is the first time we’ve seen a snack from the Natural category emerge as King of Snacks. 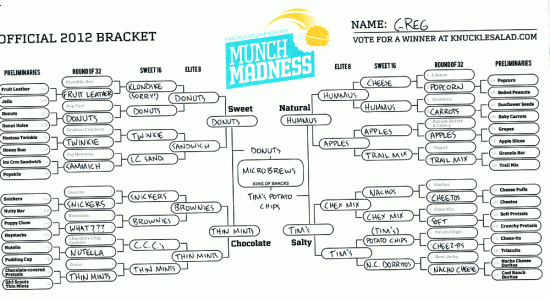 I felt bad about bumping off the fruit leathers for the Klondike Bar because I grew up a half hour away from the Stretch Island Fruit Leather place and, like, a hundred half hours from the Klondike. Oh well. —Greg Hoff, March 20, 2012

They like to play it fast and loose in the Pacific Northwest, as evidenced by microbrewed beer suddenly stumbling onto the court in the middle of the championship game, punching donuts and potato chips in the face, and taking home the trophy.

Potato chips, Snickers, nachos, puppy chow, cheese, and beer. The question is, who has it right?

You may have noticed the glaring absence of a representative from the South. That’s because John, Jenny, Diana, Li’l Tony and I, all having grown up in GA and/or FL, have posted our own brackets to Facebook. This will represent the South.

Feel free to upload your own bracket to the Facebook page. It could prove you backed a winner from the start, or at the very least, will give the rest of us an opportunity to point at your weird choices and say, “Really?!”

And once again, remember to vote your favorites today!