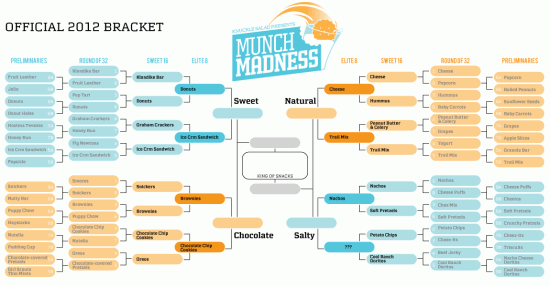 Once again, your votes have been counted in the night (by elves, probably). We now have an Elite Eight! By this time tomorrow, I’ll be announcing the Final Four, so in today’s vote, only one snack from each division can advance. As a result, we’re seeing some super tough match-ups. Here they are:

These snacks are difficult to compare (do you give more points to the snack that’s colder, or the snack that’s better for breakfast?), so in the end, it’s probably going to come to personal favorites and snack loyalty. There are as many varieties of ice cream sandwich (wafer, chocolate chip cookie, waffle, pretzel, etc.) as there are types of donut (glazed, cruller, cream-filled, jelly, and so on).

One time, my friend Li’l Tony sliced donuts in half and made them into ice cream sandwiches. That was probably the ultimate sweet snack. The question is whether to count it as more of a donut or more of an ice cream sandwich, and I’ll leave that up to you. Also, try it. But also, don’t try it—officially, Knuckle Salad is telling you not to eat that because you’re going to kill yourself. It’s right here in writing.

What a classic match-up! You could ask virtually anyone in America for input on this, regardless of age or level of culinary sophistication, and they would be able to offer input. So if you’re having trouble making up your mind (and I know you must be), maybe you should consider asking a first-grader.

Trail mix has its work cut out for it, coming all the way from the preliminaries to battle the No. 1 seed for its spot in the Elite Eight. But where cheese is only cheese, trail mix can be nuts, dried fruit, chocolate, cereal—any number of things, all combined. Will that be enough to give it an edge?

Since I failed to successfully post the Potato Chips vs. Cool Ranch Doritos vote yesterday, today’s polls will include a make-up vote for that, as well as two versions of the Salty Division vote for today, pitting nachos against both possible competitors. Whichever chip makes it into the Elite Eight will determine which of the other votes we’ll—you know what? This sounds more complicated than it is. Just vote and tomorrow I’ll tell you what you decided. Either way, one of those three snacks is going to make the Final four.

Will it be nachos? Could be, if early predictions from Texas are any indication. Nachos are certainly the more elaborate snack. But potato chips have a certain can’t-stop quality about them that few other snacks can claim. They come in flavors, too, which many people find difficult to refuse, like salt and vinegar, BBQ, and jalapeno. Oh, and some of them have ridges! That probably counts for something. I guess we’ll find out.

As always, voting is open to everyone, via Knuckle Salad’s Facebook page, from 9 a.m. to 9 p.m. EDT today. Be sure to vote your favorite snack into the Final Four! [Voting in this round is now closed. Read about the Final Four here.]