It’s the Final Four! Your judges have tried every single recipe. A bunch of them were, I’m sorry to say, utter duds. I don’t think any of us envisioned at the outset that we’d end up having to announce that a bunch of recipes that people had shared, and probably worked hard on, and definitely claimed to really love, are objectively terrible. I can’t speak for every judge but I feel bad about ripping apart some of these recipes. On the other hand, it’s a sort of community service. Tens of thousands of people have saved these recipes because they looked/sounded/seemed so great. If they’re really not, then…well…that should be out in the open. And some of these low-scoring recipes just weren’t all they were cracked up to be.

Except for the Stouffer’s Mac and Cheese recipe. We have no idea if that one is any good or not.

Now you’ve taken heed of the judges’ assessments and we’re all in the process of giving these recipes a more accurate ranking. So far, that means taking the Elite 8 down to a Final Four, eliminating the very worthy Chili’s Skillet Queso, Popeyes spicy chicken, Arby’s Beef ‘n Cheddar and PF Chang’s Mongolian Beef—although, after reading that last one and seeing what went down with the aforementioned Stouffer’s Mac, the Mongolian Beef was very lucky to be in the Elite 8 at all. Goodbye, greasy salty beef bowl!

The four that remain, Hooters Fried Pickles, The Taco Bell Crunchwrap, Chick-fil-A’s chicken sandwich, and Reese’s peanut butter eggs are an interesting group. The first three were the highest seeds from the outset, indicating that out of all our recipes, they were the most repinned on Pinterest, and clearly with good reason: each one left our judges pleasantly surprised, and earned a high rubric score for being more or less worth making at home. The peanut butter eggs are a bit of a dark horse, starting out at a 12 seed. But it’s hard to argue with a judge who gives them a six out of five for taste.

Next, it’s up to you to decide which two of these four recipes should advance to the final round. Will it be Pickles vs. Crunchwrap? Chick-fil-A vs. Reese’s? This poll only runs through Saturday, so get your votes in (you can vote once per day) and tune in Sunday to see which finalists will compete for the top spot. 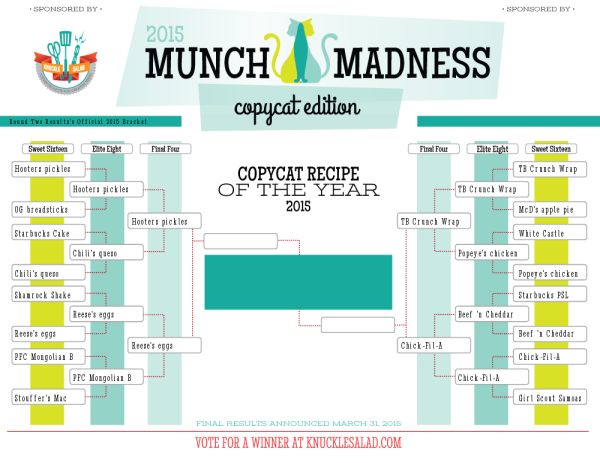 Currently in the running: