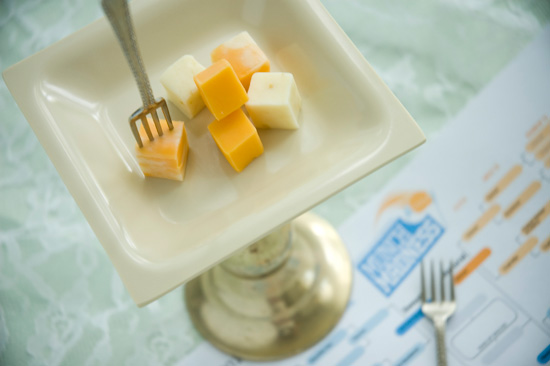 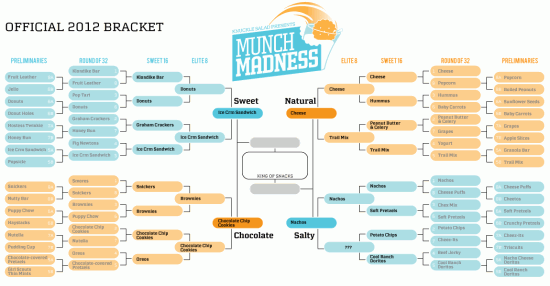 With just two rounds of voting to go, Munch Madness draws ever nearer to crowning the 2012 King of Snacks. Just one snack from each division remains, and currently, your votes are determining which pair of snacks will advance to the final. On behalf of Knuckle Salad, your Munch Madness news source, I spoke with the remaining competitors (yeah, you heard me) to get a glimpse into each snack’s unique style and strategy. 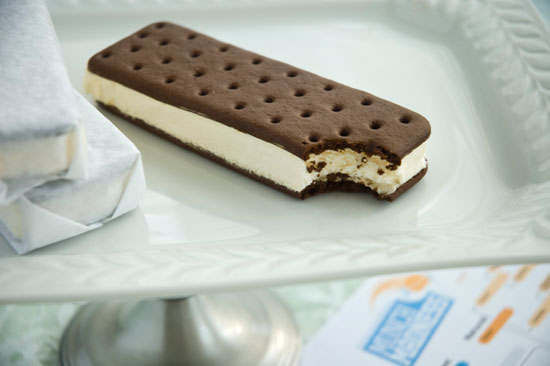 The Ice Cream Sandwich has been called a lot of names, some more friendly than others. “I didn’t mind when parts of Britain called me a slider,” it recalls. “I’ve never forgiven Australia for ‘cream between,’ though. That’s rude. I like ‘Ice Cream Sandwich’ just fine.”

This humble confection has come a long way from the beginning of the Munch Madness tournament, where it started with a fifty-fifty shot at a No. 5 seed. Today, the Ice Cream Sandwich joins the Final Four, representing the entire Sweet division, a success for which it thanks its own upbringing. “I was taught to be well-rounded, so I have a lot of variety in my arsenal. When I travel the United States, I like to do it up—chocolate wafers, waffle cones, Neapolitan ice cream. But you should see me when I visit other parts of the world. Like Asia. You wouldn’t believe what I can do with some yam ice cream. It’ll blow your mind.”

In spite of this spirit of change and evolution, one thing seems to have remained the same throughout its long history in America. “Every year, some new publicist comes around and pitches a plastic wrapper for my chocolate wafer version, and I’m like, ‘Dude, how many times am I going to have to say no to this?'” The paper wrapping, it feels, is essential to protecting its rectangular shape. “Plus, everyone likes peeling that thing off. It’s a pain in the neck but it’s nostalgic.”

The Ice Cream Sandwich is confident about the next round, but it knows that anything can happen in Munch Madness. “It’s weird going up against the Chocolate Chip Cookie, because sometimes, I’m made of chocolate chip cookies.” But that isn’t going to stop the ice cream sandwich from giving this tournament all it’s got. “If anything,” it points out, “that’s probably an advantage.” 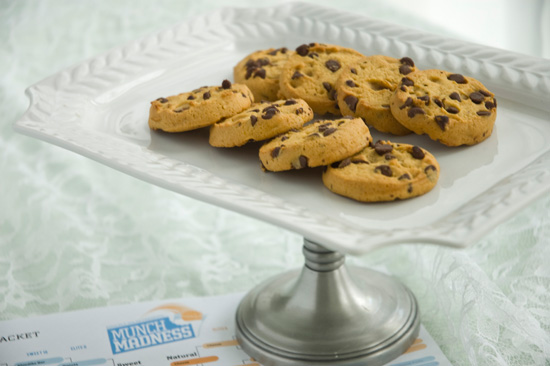 “It feels great to have made it this far. I’m just really blessed.” I’m chatting with a Chocolate Chip Cookie in front of an elementary school. Despite its busy Munch Madness training schedule, the cookie has come here today to help out with the annual fundraiser, a bake sale put on by the PTA. The Chocolate Chip Cookie’s schedule is crammed with events like this throughout the year and no matter what, it tells me proudly, it has never missed a single one.

It may seem like a tough cookie, but it’s nothing if not sentimental. “Did you know there really was a Toll House Inn in Massachusetts? I was born there!” It pulls up pictures on its phone: the Toll House Inn, the Nabisco factory, and a smiley fellow named Wally Amos.

I begin to wonder if this softer side of the Chocolate Chip Cookie might get in the way of a Munch Madness victory. “No way! I’m going to take my A game to the Final Four. I might even see if the judges will allow me to bring some M&Ms.”

Yet there’s something in the cookie’s demeanor that seems almost as though it would rather be home with the family, and that could interfere with its performance. “There will be plenty of time for a glass of milk with the kids after this is over,” it assures me. “Besides, they’ve always treated me like the King of Snacks around here. I know how much it’ll mean to them when I come home with the trophy.”

As I draw near the dairy farm where Cheese has asked to meet, I can see its lone square figure in an empty field, silhouetted against the rising sun. Cheese has been training here for months, and this is where it spends its mornings, alone with its thoughts.

It doesn’t have much to say about the competition. “There is only to win,” it tells me before returning its attention to the training grounds, which are strewn with artifacts that date back to ancient Greece. Presumably, Cheese collected these artifacts itself, during its own long history, but its concentration is such that I’m unable to confirm this. It’s no coincidence that this peaceful warrior has entered the Final Four as a No. 1 seed.

I leave Cheese to its training, which today consists of sitting in the shade and doing something it has described to me only as “affinage.” I make a note to look it up when I get home, because Cheese is clearly too intent on its training to shoot the breeze with me today. 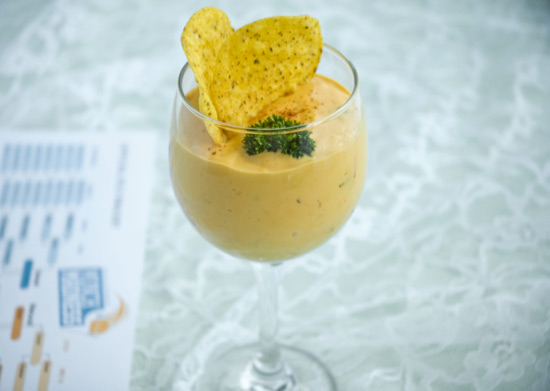 Walking up to the patio in front of my neighborhood sports bar, I’m surprised to find Nachos sitting at a small table with two pints of beer. When I ask if this is an indication that Nachos isn’t taking the competition seriously, it laughs at me. “Au contraire, my brother—this is where I’m at my best.” (I bristle at first, but notice that Nachos addresses our waitress as “my brother,” too.)

“To be honest, I almost felt a little bad about a few of them. Cheese Puffs? Come on,” Nachos says, remembering the way it swept its Munch Madness division. “I had to pull it out against Potato Chips, though. Those suckers are tough as nails. Personally, I think it’s the salt and vinegar advantage, but I brought the heat for sure.”

At the mention of the other contenders, I remind Nachos of the fans’ concern that Cheese, a fellow finalist, is in fact one of its own essential ingredients. But if Nachos is worried about taking on so close a competitor, it doesn’t show. “Y’all are probably thinking we’re closer than we are. But we did come up together, so I know Cheese’s weak points. I didn’t come here to make friends.”

Do you know which snacks deserve to make it to the final? Vote by 9 p.m. EDT! [Voting in this round has now closed. Continue to the Munch Madness 2012 National Championship Showdown.]