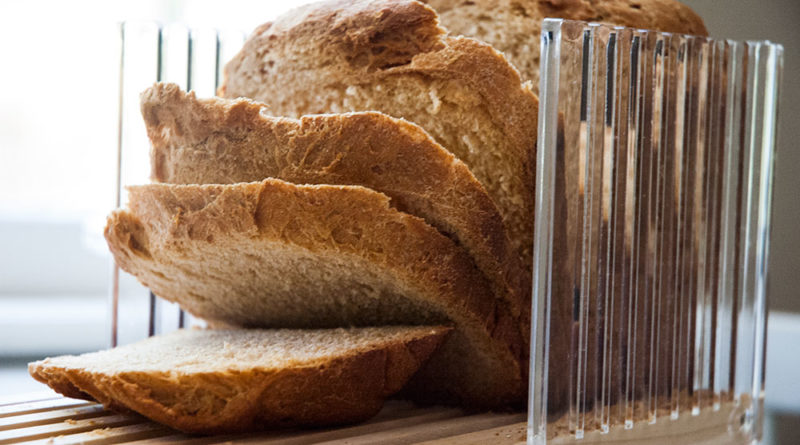 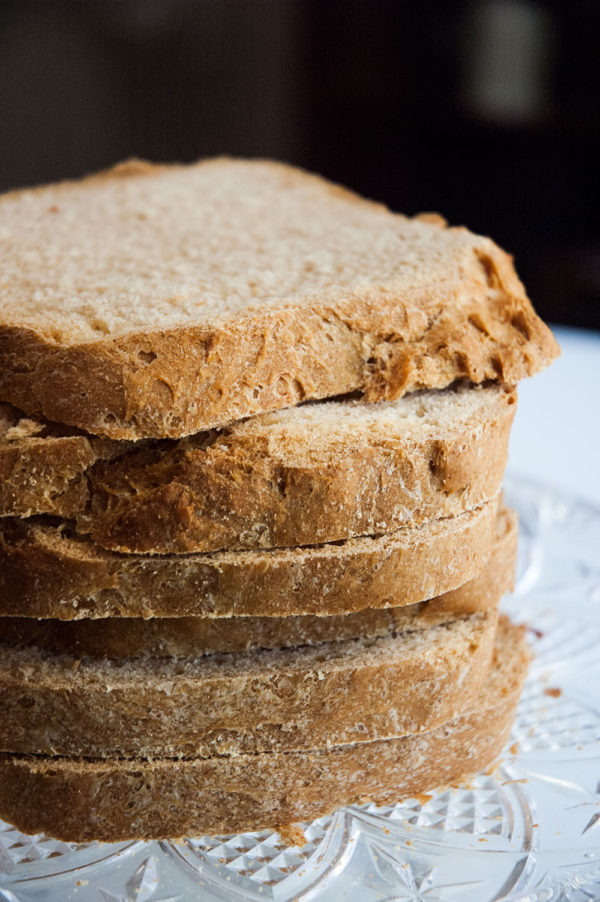 If you’re busy, regular-ass bread is a weird thing to make from scratch.

Bread isn’t expensive. There’s good bread to be had at the supermarket, with decently non-radioactive ingredients. Most of us don’t eat that much of it anyway so the added preservatives are kind of a bonus. And even with a bread machine doing most of the work, you still have to choose/buy/store ingredients, and measure everything, and slice the bread, and clean out the bread machine at the end.

Believe it or not, I’m not trying to talk you out of this recipe. I’m just being honest.

What has surprised me about baking regular-ass bread is that it is actually a treat. Fluffy white bread is divine to those of us who usually subsist on the denser whole wheat (or worse, gluten-free) stuff, and even fresh-baked whole wheat bread is just more rewarding than buying it in the store. It’s a solid return on your investment—an investment of half a dozen ordinary ingredients (one of which is water) and a few short minutes.

The real problem is that you know two things the moment it comes out of the machine:

Long story short, I think I have put on three pounds this week. Three doughy bread-pounds.

No lie: This recipe makes the softest, fluffiest white bread I’ve ever had. You know when something is so soft that if you move your hand toward it with your eyes closed, you can’t tell exactly when you’re touching it? This is that soft.

Split the difference—two cups all-purpose white flour to one cup whole wheat—and voila! A soft, yet sliceable, loaf of carby deliciousness. (That’s what’s pictured here. But you would not believe just how much softer the all-white version is. I feel like you probably think you have an idea of the difference between the two, like you’re looking at this as a reference and going, ‘OK, so softer than that, got it,’ BUT YOU AIN’T GOT IT. It’s softer than you’re thinking. Now you’re like, ‘sure, but what she doesn’t realize is that I’m already imagining really soft bread,’ and I’m telling you, I KNOW YOU ARE, and that is not soft enough. Softer!)

Now, I think we can all agree that whole wheat is a healthier option. But in a one-to-one flour substitution, it’ll never be as fluffy and soft as white bread. It just won’t. That’s because there’s more gluten in all-purpose flour and less, you know, ground-up wheat hulls or seashells or whatever (probably not seashells).

But it’s mostly the gluten. If you’re committed to a whole wheat loaf but you want all that fluffiness, I’m told that vital wheat gluten is just the thing. I don’t know firsthand how much you should use, but a reviewer of this recipe claimed success with “a few teaspoons.” Never mind that a few teaspoons pretty much places us in “about a tablespoon” territory; I haven’t tried it yet so I can’t say for sure and have no business converting anybody else’s measurements. Anyway, I thought I should mention it. Give it a try if you like. You can’t really go wrong, because it’s already good without it, and if gluten didn’t make everything better, life wouldn’t be so unfair and trying for sufferers of gluten sensitivities. Let’s have a moment of silence for them. Are you reading this aloud? No? Good, then that’s done.

So yeah, this is regular-ass bread, but it’s, like, good-ass bread.