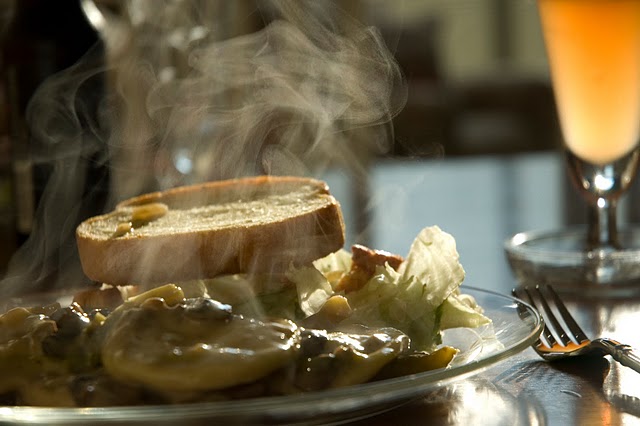 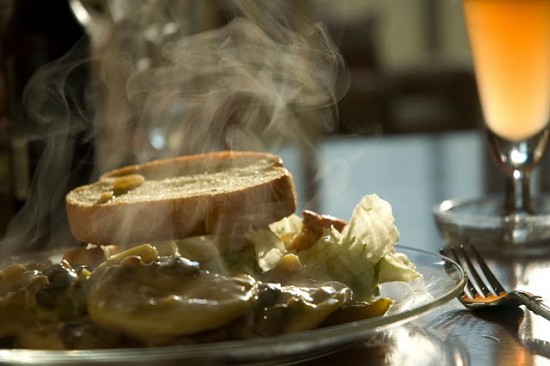 Round 3 of the Experimental Dinner Game took place at Jenny’s, where she made homemade ravioli. From scratch. And not just any homemade ravioli… homemade ravioli stuffed with steak and a blend of cheeses, with a white mushroom-and-pepper sauce, inspired by the classic Philly cheesesteak. As a dinner, this little twist was the difference between predictability and genius.I invited the chef herself to do a little guest-blogging here and hand-deliver the recipe in her own words, and she was kind enough to agree to it! So without further ado (or, as was printed in 30,000 copies of a newspaper I once worked for, adieu), I’m going to hand it over to Jenny! 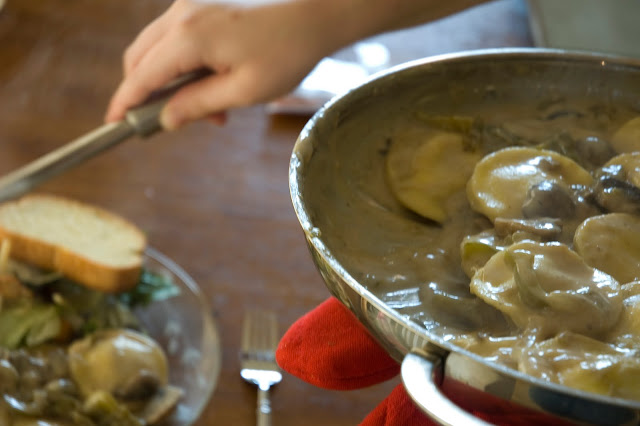 One evening, I was talking to Kristina about how I would like to plan a vacation around food. I offered up the example that I would like to go to Philadelphia to have the original Philly Cheese Steak. As soon as I said it, Kristina looked at me and said, “That’s your Dinner Experiment.” And so it was.

I reinvented the classic Philly into a ravioli. It turned out pretty tasty. The pasta came out a little on the thick side, and the meal was a little on the heavy side (think Beef Stroganoff), but overall I had a great time and made something I am happy to claim as my first “Dinner Experiment.”

As for the pasta itself, there are some great step-by-step tutorials online. I recommend this one because of the photos. I learned not to be afraid of fresh pasta. It is pretty easy, and tasty! I made mine without a pasta machine. It was thick and a little gummy, but totally edible. I can see the benefits of using a machine, but it’s not necessary unless you plan on making pasta a lot.

A big thanks to Jenny for a delicious meal and a wonderful recipe to share. I don’t know about you guys, but I feel emboldened to finally give fresh pasta a shot. Good luck to everyone else who decides to try out this cheesesteak ravioli… it’s delicious! —Kristina