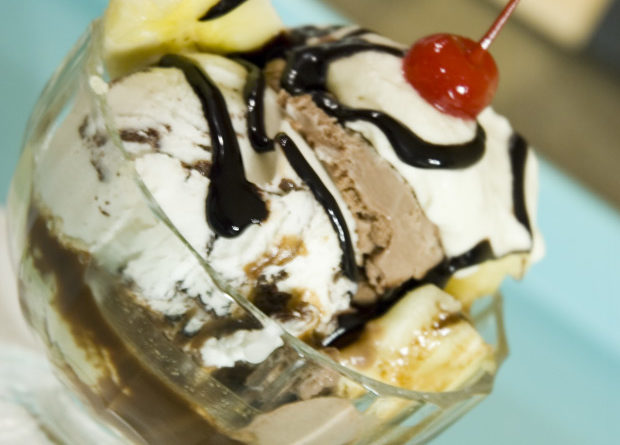 FoodBuzz, who sponsors my blog (see? that’s their ad over to the right), has asked me to participate in their “Top 9 Takeover” by showing you a photo of my ideal banana split. For ovarian cancer.

My grandmother was diagnosed with ovarian cancer about five years ago. She passed away in January. I don’t talk a lot about it, because there doesn’t seem to be much to say. She was always a huge part of my life and I didn’t ever dare imagine that someday she might cease to be. It’s strange to chat about things that you can’t imagine, so I mostly just don’t.

But since FoodBuzz brought it up, I will say that she liked milkshakes and sundaes a lot. She and my mom used to go to Steak ‘n Shake all the time after they finally opened one down in West Palm. She saved the cheeseburger coupons from the Sunday paper, and she was proud of her senior discount card and the 10%-cheaper side-by-side milkshakes it entitled her to. She was proud of senior discounts in general, but I think that one was especially prized.

At home, milkshakes are a lot of trouble, so instead she used to look forward to a bowl of vanilla ice cream with dark chocolate syrup after dinner. There was a magic shell phase back in the ’90s, but that time was brief. It ended the day my mother made her a big sundae with whipped cream and magic shell. But! My mom didn’t realize at the time that magic shell hardens by getting cold (a common misunderstanding, judging by how many of my friends still forget not to store theirs in the fridge), so she drizzled it all over the sundae, on top of the whipped cream, where it didn’t make contact with the ice cream and never solidified.

I guess Grandma didn’t know that about magic shell, either, because she dug in and got a big mouthful of unhardened chocolate goop. I don’t know if you’ve ever tasted magic shell straight out of the bottle, but it’s kind of chalky and artificial. So not only did my grandmother never eat it again, but she couldn’t bear the mention of it without dramatically recounting the horror that befell her that day.

In fact, she spent a lot more time telling that story than she ever spent actually enjoying magic shell—an injustice she was all too conscious of.

That’s how strongly she felt about ice cream sundaes.

Sometimes, I regret how often I let myself be caught up in the little things — geez, the magic shell story again? — and failed to really appreciate the important parts. It was fun and funny that my grandmother’s love of ice cream was such that even after a decade, she couldn’t let go of the day when her dessert had betrayed her. But I too frequently took her fun-ness for granted.

I have to admit that I sometimes considered her finicky, which is not unlike defining North America by its polar bear attacks: sure, they happen, but there’s a hell of a lot more going on than that, and besides, you wouldn’t give up the polar bears over it. From finicky comes neat and tasteful, and she was both. She was also loving, selfless, and tirelessly encouraging. And although at times I scold myself for saving used containers or pretty-but-useless scraps of ribbon or other things I would’ve called her crazy for, I wouldn’t mind being thought of as finicky if it meant I could be half as comforting and empowering a presence in the lives of the people I care about as she always was in mine.

So I figured the least I could do was take a picture of a banana split.

There’s nothing extraordinary going on in this photograph. What makes my banana split ideal to me is that I made it out of what I had in the house.

What’s in that banana split:

I feel like I’ve passed a test. I had the basic ingredients for a delicious banana split on hand, even though I had no intention of making one and haven’t probably since I was 11 years old. Nope, I just announced that it was banana split time, walked downstairs, and had it ready in under two minutes. So I guess my kitchen is pretty well-stocked, which I have to admit I’m kind of proud to say. I think Grandma would have been proud, too.

I’ll be double-proud if it turns out that this post helps FoodBuzz and Kelly Ripa raise some money for ovarian cancer research—which it will, if you click that link and make a little pretend banana split on their site. They donate $1 every day that you do it. It’s a very, very good cause.