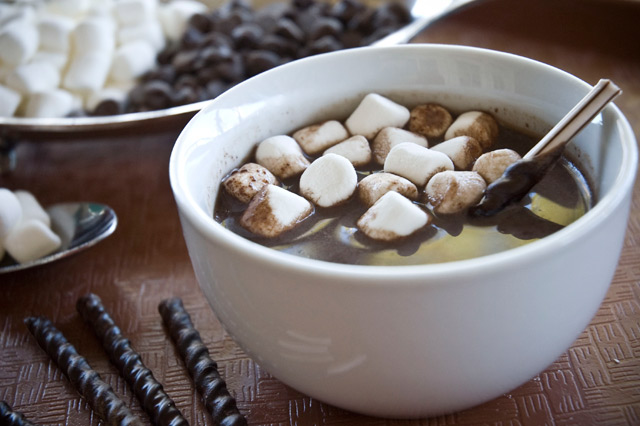 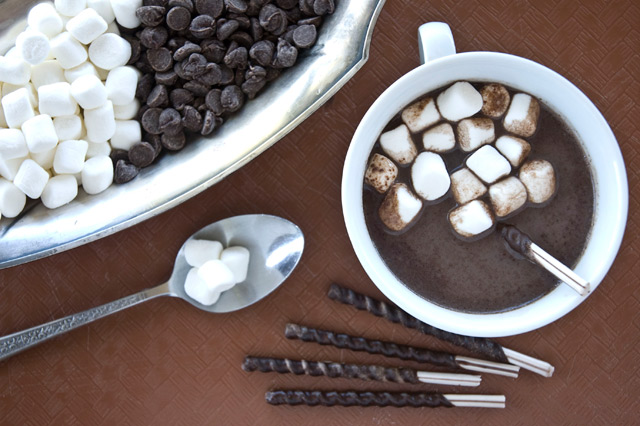 There’s nothing wrong with Swiss Miss. I grew up on the stuff. I have two boxes stashed in my desk at work.

But let me show you something.

Sure, I expected to read, “chocolate, sugar,” full stop, but I’ve seen worse. However, after more than a quarter-century of chocolate connoisseurship, I finally got curious about the meaning of “processed with alkali,” and looked it up.

It turns out that processing cocoa with a base like alkali is the difference between regular cocoa and Dutch cocoa: it turns regular cocoa sweeter and darker in color and makes it easier to dissolve, and when that happens, it becomes Dutch cocoa. Fine, mostly. Except for the downside, because there’s always a downside. The Dutchification process also strips the chocolate of flavonoids and antioxidants.

I know, right? I love antioxidants.

And maybe that’s not such a big deal, but at that point I was intrigued, so I went back for more. Hydrogenated coconut oil! Doesn’t the hydrogenation of coconut oil turn it into a trans fat? [clickety clackety searchsearch ENTER] Yes! It sure as heck does. Man oh man. I was blowing this case wide open.

I recognized the next few ingredients so I skimmed past them. Nonfat milk, calcium carbonate, salt—wait, carbonate? Calcium sounded good, but carbonate was very suspicious. John is always talking about the time Han Solo got frozen in carbonate for a million years because he stole a loaf of bread or something, so based on connotation alone, I didn’t think we should be eating this. What if it still has pieces of criminals in it? I mean, not to assume it’s necessarily used carbonate, but—[clickety] Oh, that’s carbonite.

Okay, so upon actual investigation, it appeared that calcium carbonate is pretty much okay to eat. It’s what’s in calcium supplements, and it seems like the next best thing to actual dairy. Plus it’s what snail shells are made of, and rocks. Rocks are… well, they’re all-natural, at least. I decided to count it in Swiss Miss’s favor.

Moving on. I knew that mono- and diglycerides basically meant more hydrogenated oils/trans fats. Bad. Artificial flavor isn’t anyone’s favorite, but I was willing to ignore it, and a quick Google search revealed that nobody really has much of a clue about carrageenan at this early stage so everyone is pretty convinced it causes cancer or instant blindness or bodily leakage of some sort. It could be fine. I don’t know. By then I had grown weary of research.

Why couldn’t it just have said “chocolate, sugar,” like I’d wanted? Now I was going to have to go make my own cocoa mix and it was going to be a huge pain and probably take me all day and I might as well be Amish and no way would it be as good as the packet and when will I learn my lesson about reading these labels all the time?

Then I looked up what should go into cocoa mix (chocolate, sugar) and what else I could add if I wanted (powdered milk and cornstarch to make it thick and rich even when you mix it with plain water) and how very, very little effort it took to make. Then I started to have fun trying other little add-ins, like salt (to enhance the sweetness with saltiness!) and chocolate chips (because I’d eat my shoes if you melted chocolate on them!) and decided that yeah, this was worth it. Totally worth it.

I still love you, Swiss Miss. But we need to talk about these trans fats if it’s ever going to work out between us. 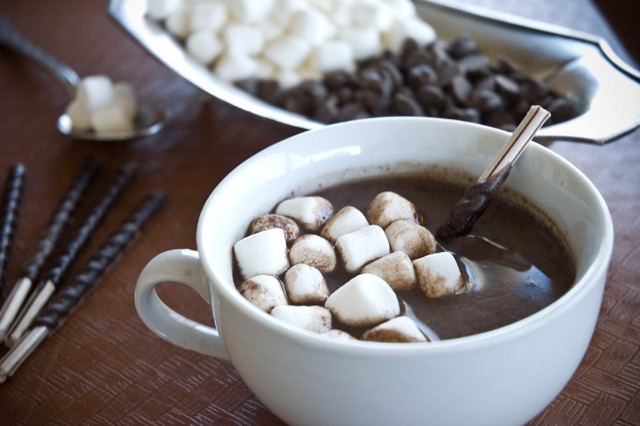 A couple notes. If you decide to portion the mix out ahead of time instead of storing it in a big container (which is a great idea if you’ve got kids or leftover Swiss Miss packets you want to fool yourself with), just divide the powdered mix up among your smaller containers before adding your chips, then add the chips into each package separately. Otherwise, you might find some portions have more chips than others, and I studied wars in high school that were triggered by lesser injustices. Homemade hot cocoa mix can also be a lovely little hostess gift if you put a tiny tin or ziplock bagful into a pretty mug with some marshmallows and maybe a peppermint stick. It’s a nice change from bringing a bottle of wine to everything, especially if your hostess is, say, pregnant, or Seventh Day Adventist.
[recipe]