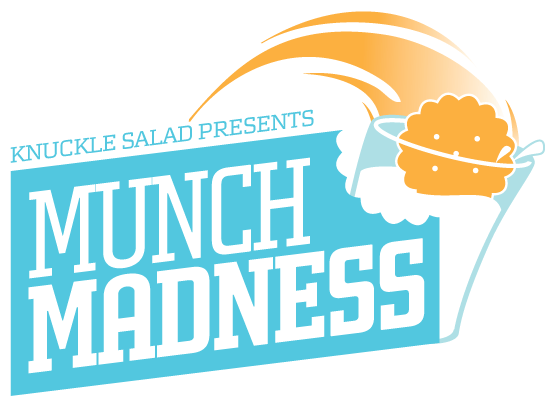 When spring conversations inevitably turn to the NCAA basketball tournament, I do a lot of backpedaling (“er, no, not Fantastic Four, I mean the other one…”) and rapidly come up short on personal contributions (“I filled out a bracket at work once and I lost five dollars even though I am positive I correctly chose mascots who could eat the other mascots”) because sports, while sometimes fun to watch, don’t hold my interest after they’re over.

Snacks, on the other hand? I think about snacks all day.

Snacks I’ve had recently, snacks I wish I were having now, snacks I think I might be able to procure in the near future—these are the daydreams that remove me from high-energy discussions on points in the scorehole (what are they even called…basketdunks? hoopsies?). I sit and I listen and I think, What is the point of guessing which team is going to win, when as soon as they’ve played each other, the teams will all change and no one will care anymore? You know what would be useful? Everyone guessing which snack is going to win.

Then I stop ordering drinks, because I’m not making sense. Snacks can’t “win.” In order for one snack to win, another would have to be declared the loser and the very idea brings a bitter tear to my eyes. There are no losers. All snacks are wonderful. Except the ones with olives.

Perhaps you disagree. I wouldn’t snack an olive if you paid me, but I know people whose olive devotion rivals sensible people’s loyalty to peanut butter. I don’t understand that, but I do respect it. And that’s what made me realize that losing in the opinion of one or many isn’t the same as actually losing. You don’t have to be popular to be great. Look at Huffamoose. Or Harry S. Truman.

So let’s just do it, you guys. Let’s set up a snack food bracket, vote on what we personally want to snack, and find out which classic snack emerges the 2012 King of Snacks! 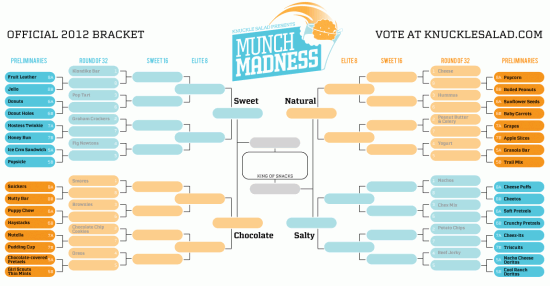 A word about the structure: There are 48 snacks included, decided primarily by me and my bracket coach, longtime food-eater and sports fan John Jarvis, with input from a panel of people we know experts. There are, yes, more than 48 snacks in the world, but we’ve narrowed this list down according to what we believe to be the most popular American snacks. (Sorry, edamame, falafel and halvah—maybe next year.) The tournament will ultimately include only 32official competitors, but we will first hold a preliminary round where matched or otherwise related pairs of snacks (Nacho Cheese Doritos vs. Cool Ranch Doritos; grapes vs. apple slices; popsicles vs. Jello) will face off to secure a position in the final bracket. Four heavy-hitters in each category will be given a bye for the first round of votes.

As for omissions: We couldn’t include everything, so we had to decide on some basic criteria. Chief among these was that a snack is a snack; it is not a dessert, an appetizer, or a side dish, so cakes and French fries didn’t make the cut. If you wouldn’t reach for it an hour before dinner, and if you can’t walk around while you eat it, then it isn’t a snack. Of course, if you would reach for something we didn’t put on the list, we invite you to give us a piece of your mind. We can’t do anything about it, but we know your favorite snack is at least worth a strongly-worded letter or comment.

Regarding seeds: Just as we did when deciding what would make it onto the bracket, we had to figure out what chance each of those things stood in the tournament in order to seed them. We did this through a combination of research, intuition, anecdotal evidence, and our own arrogant opinions. In some cases, we understand that the seeds are flawed (we don’t really expect Fig Newtons to clobber all donuts), but the structure of the preliminary elimination round necessitated a few such compromises. We’re confident that it’ll all work out in the end.

What happens now: Each round—one preliminary elimination, three division rounds and two final rounds—will be determined by a vote, which will be held daily on Knuckle Salad’s Facebook page, and will be open to all voters. Voters will select their favorite snack, the one they think is best, from each pairing. The polls will each stay open from 9 a.m. to 9 p.m. EDT (except the final round, which will have a second day of voting) before the winners are noted and the next round is set up and announced. The Final Four, one snack from each division, will be pitted against each other in pairs; the winning contender from each of those pairs will then advance to the final round for the chance to become King of Snacks. What will it be? A salty snack? A chocolate snack? A sweet snack? Don’t count the natural snacks out, not with cheese leading the pack!

Today is Tuesday, March 20, and the preliminary round is already taking place. (Check the Munch Madness home page to find out what round we’re on at any given time.) Voting will take place over seven days, with the ultimate King of Snacks being named after the final vote on Sunday and Monday. An official post will be made here Tuesday, one week from today, announcing what has taken the crown as Knuckle Salad readers’ 2012 King of Snacks.

At our house, we plan to print and fill out entire brackets with our predictions, argue about it, and probably bet on the winners in an imprudent manner. There might even be a party at the end. With snacks. That’s how we do things here.

How you can win: To reward speculation, Knuckle Salad is offering a prize to one person who correctly predicts the winning King of Snacks. Make your prediction in the comments on this post, using a valid email address (one guess per person, please), before the voting closes on the Round of 32—not the preliminary elimination round, mind you, but the round after that, which takes place Wednesday until 9 p.m. EDT. After the tournament concludes, those who have guessed correctly will be placed into a drawing to win a mystery prize related to the 2012 King of Snacks, whatever it turns out to be. And it will be good. Yes. That has already been decided.

Okay! What do they say at the beginning of a basketball game to let everyone know it’s time to start sportsing? Play ball? Good bouncing? Do some baskets? The polls are now open for the preliminary elimination round, so go make your voice heard! And good bouncing.