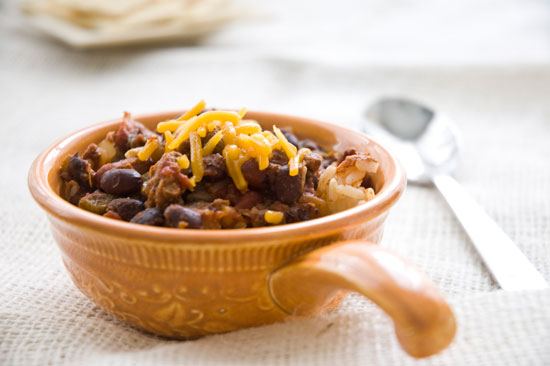 I don’t know anything about chili, and I don’t have a chili recipe of my own. 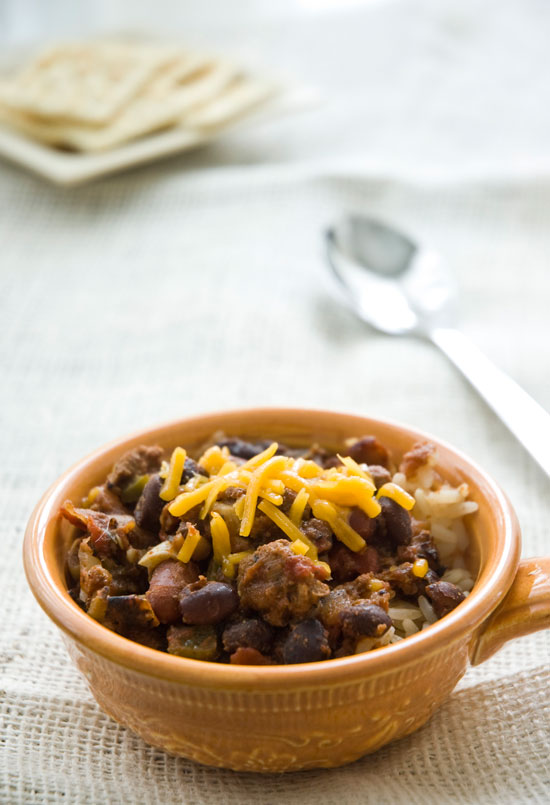 At least, I didn’t, until my March issue of Cooking Light arrived. Because as it happens, five people (well, including me) sampled the enormous pot of chili I made, and they (including me) raved about it and ate it all up. So this recipe is now the recipe I make when I make chili. Which I will probably do a million times this summer. Because it’s very good, and cheap, and easy, and seems to be relatively healthful: plenty of beans and veggies; minimal red meat, fat and sodium. 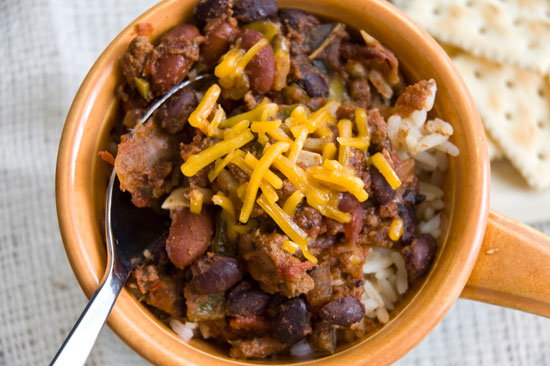 I didn’t change much about the Cooking Light recipe, not that you asked. I added three whole jalapenos rather than one and a half, roasted all my peppers under the broiler, used homemade broth and tomato sauce (maybe a little less of the latter than the recipe called for), and added a can of black beans and an extra can of roasted tomatoes. Oh, and I added some seasoning, like a pinch of cinnamon and allspice, a little bacon salt, and a dash of cayenne pepper when I realized my extra-jalapeno idea hadn’t given it the kick I’d expected. These were all minor alterations. Otherwise, it’s exactly the same. And it is good. Very, very good.

I’d like to describe what’s good about it, but I don’t have much of a chili vocabulary. I became determined to learn to like chili a year or two ago, after a lifetime of being not-much-of-a-bean-person. I definitely go to popular local chili cookoff events and try everything they have even if it smells like chocolate or has pineapples in, and although my education has gone swimmingly in that regard, I haven’t really gotten to the chapter where you learn to talk about chili. But it’s good, this recipe, because… of the… taste. It tastes like peppers and it’s not too tomatoey. And the meat, there’s some meat but not a lot, maybe just enough meat, and the beans are… good. Good beans.

Man, I don’t know. I really liked it, other people really liked it, I’m looking forward to making it again, and if you aren’t already married to a chili recipe as people apparently tend to become, you should definitely try this one because it’s good.

Note: My personal alterations to this recipe are very minor, because it’s a great recipe and doesn’t need changing. For the sake of thoroughness, I will nonetheless mark the recipe with the minor changes I made. [My notes will look like this.]