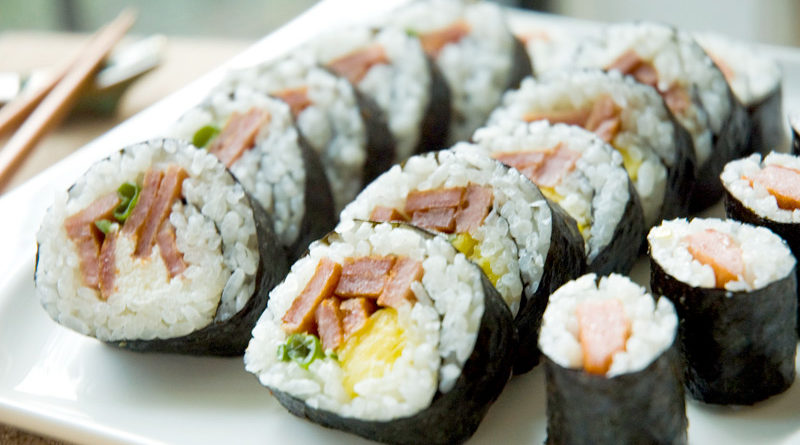 Up until this week, I had experience with spam of only one variety, and it was not the kind that involves “pork with ham.” 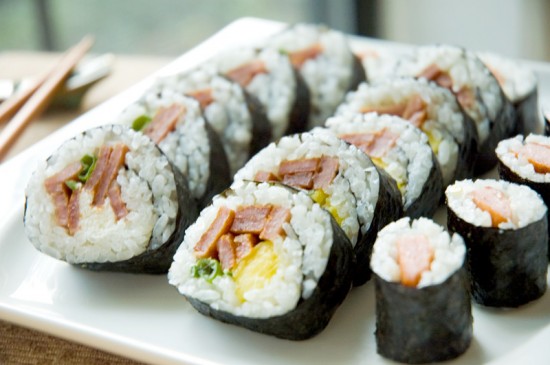 But shortly before my adventure with ham-type Spam, I had a curious run-in with scam-type spam, which has resulted in a fun little puzzle I shall now place before you. Here’s what happened.

Spammers, as you may have noticed, can no longer post identical comments over and over, because modern spam filters are hip to that jive. Instead, they often use one innocuous comment—something complimentary, usually along the lines of, “Wow, great article! I really agree with a lot of the points you’ve made”—and have a computer replace certain words using a thesaurus, creating thousands of variations, most of which make no sense.

I normally delete spam with wild abandon, as do we all. But occasionally it turns into a fun game where I try to reconstruct the original meaning. (It’s possible there’s a requisite level of nerdiness one must achieve before this qualifies as a “fun game,” but believe me, it’s great.)

So here’s a puzzle for you. Recently, a site I work on was hit with no fewer than six versions of the same jumbled message, each with a different combination of reckless word replacements. Most of it was easy to solve. For instance, where it said, “I did some spider’s web surfing and organize this blog,” he clearly meant he had done some web surfing and found the blog, because to found something is to organize it. (That is, if you overlook the fact that “found” was meant to be past tense, not present, but English is tough.) In the end, there was one sentence that I just. cannot. figure. out. Here they are, with the most baffling replacements color-coded for your convenience.

I firm sooner than particular of this blog ask for up and it is really incredible.

I indisputable by personality of this blog ask for up and it is quite incredible.

I indisputable not later than something like a collapse of this blog ask for up and it is really incredible.

I firm next to way of this blog restore a record up and it is in point of fact incredible.

I indisputable next to particular of this blog ask for up and it is quite incredible.

I decided not later than something like a collapse of this blog restore a record up and it is quite incredible.

What…what does it mean? It’s in my brain now. It’s just trapped in there, forever, filed under Questions I Will Never Know the Answers To. I hate that folder. 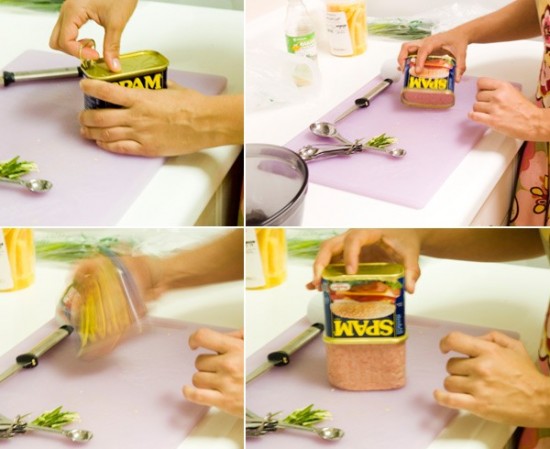 Speaking of the other kind of spam, though—Spam, that is—I had, as I said, never tried it until this week. I have avoided it, because first of all, it’s meat in a can. I feel like there doesn’t need to be a second-of-all. Any reservations anyone has about any kind of canned meat are completely well-founded. (Or maybe well-organized! In which case they’re probably in a big red folder marked Reservations about Canned Meat, just behind Questions I Will Never Know the Answers To. I hate that whole filing cabinet.)

There are people out there who eat Spam, because if there weren’t, Hormel would stop making it. Some people probably love it. And I started to wonder who.

Apparently, Hawaii cannot get enough of Spam, for instance. Huh.

So I did a little research and found that the world has a lot of nice things to say about spam musubi, which is spam served with sushi rice and nori. And naturally, I started to wonder what was so great about it.

But I was hesitant. I don’t even like ham, so I wasn’t sure what my best-case scenario was with Spam.

However, I sort of liked the suggestion that it could be combined with sushi ingredients, partly because sushi and Spam have one important thing in common: people who have never tried it are squicked the hell out by the very idea. 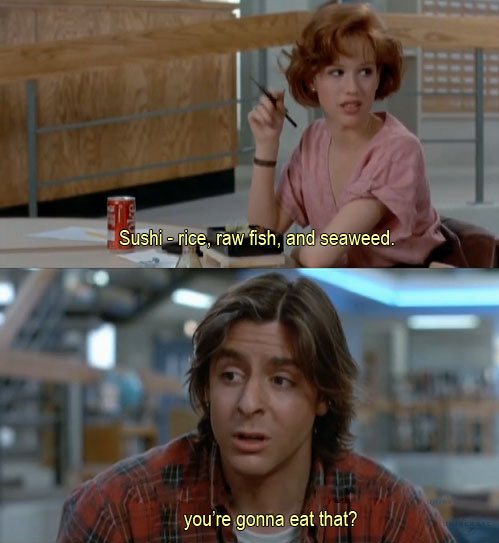 If something as tasty as sushi can overcome that kind of reputation, then maybe, I thought, I should check Spam out just to make sure it’s terrible.

I asked my friend Rich, who lived in Hawaii for a while growing up and also doesn’t like ham, and he said he hated Spam. I asked my friend Jenny, who has eaten lots of foods I haven’t eaten, and she said it was pretty okay and just tasted like hot dogs. I asked my mom, and she said her father used to eat it all the time but that isn’t much of an endorsement because he was in the Army and as I recall, he only liked to cook terrible Army foods at home, like shit on a shingle.

But by that time it was too late because I had already bought the stupid Spam. 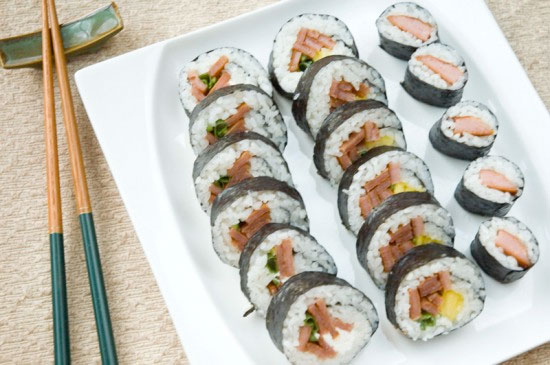 So I opened the can and splorched the wet pink meatbrick out onto the counter and tried to ignore the dog-food smell and urged John to keep his distance because he already had a laundry list of justified concerns about this experiment. And although it is “fully cooked” and “ready to eat,” I did not endeavor to sample the Spam. Instead, I sliced it as thin as I could and rushed it to a hot pan with some sesame oil and I waited until it stopped being so ghastly and pink and then we each cut off a tiny piece and tried it. John was brave. He tried it first.

I was pleased to find that all the congealed-aspic qualities of the meat had vanished in the frying process, and that what remained was just crispy salty breakfasty meat. Emboldened, I rolled it up with some fresh pineapple, super-thin slices of Serrano pepper, scallions, and mayonnaise. And you know what? You’re not going to believe this, but I think you should try it. 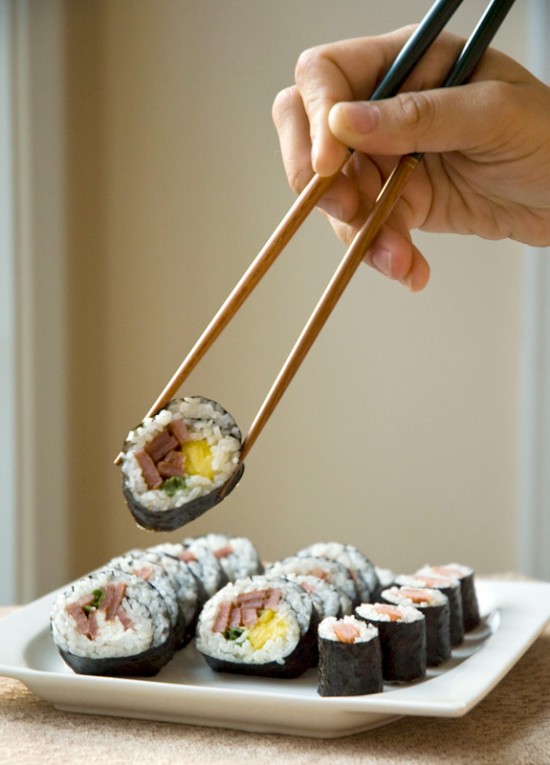 The Spam gives the roll a salty bacon-ham flavor (especially when it’s sliced as thin as this, because every part of the meat-like substance is crisp) that provides a shockingly pleasant counterpoint to sweet-acidic pineapple, and it tastes… I can’t believe I’m saying this… it tastes pretty terrific.

I also made a roll with Spam and cream cheese, and that was good, but nothing beats the Spam-pineapple-hot-hot-pepper combo.