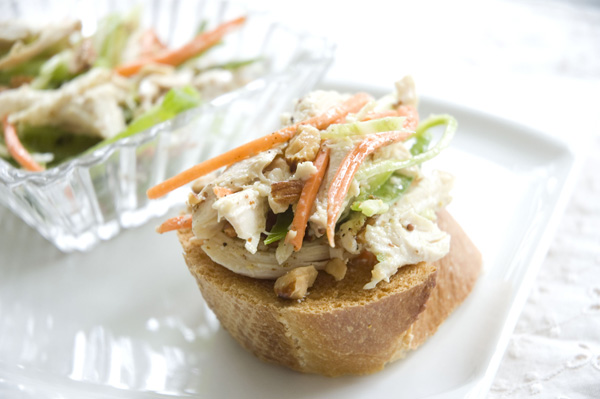 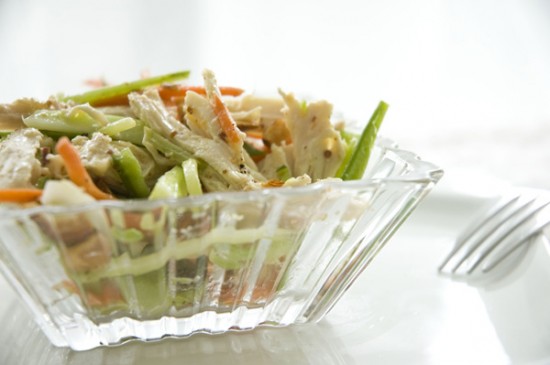 Today, I’m sharing a recipe for chicken salad that I’ve been making for years, but have never gotten around to putting down as a recipe.

Now, before you say, “Isn’t chicken salad just code for tuna-free tuna salad that serves only as an excuse to eat shameful quantities of crackers?” let me tell you about my one and only chicken salad recipe—one that came to be with a little help from my new friend, the Calphalon Electrics 3 in 1 Immersion Hand Blender. (Spoiler: Yes, this is totally a sponsored post, but don’t let that get you down—the recipe is definitely legit.)

You see, Calphalon offered to send me this cool blender and asked me to share a recipe that made use of it. And I was like, “OMG YOU GUYS INVENTED A CHICKEN SALAD MACHINE. THAT IS AWESOME.” And that’s why I’m finally revealing this recipe. And using the awesome chicken salad machine. 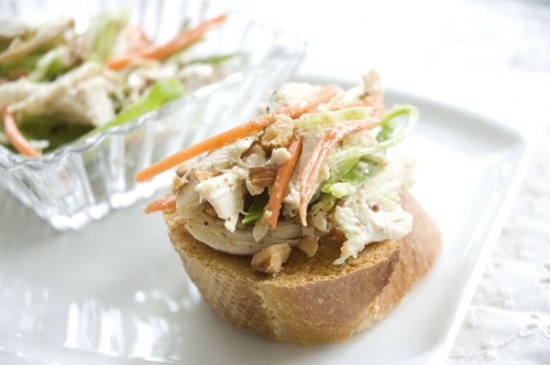 This chicken salad is fresh and crisp, it has satisfying texture and crunch, it’s full of veggies and nuts, the dressing is light, and the chicken comes out of a chicken, not out of a can.

It’s also good with crackers, except you use the crackers as an excuse to eat more chicken salad, not the other way around. 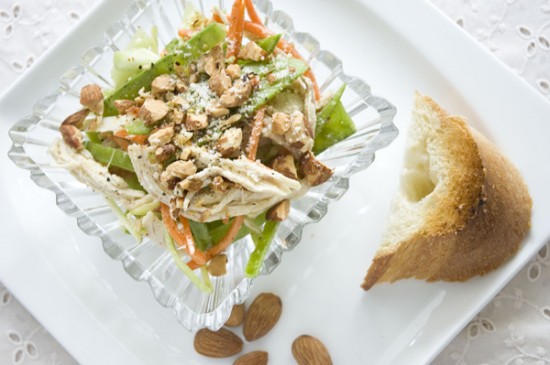 Sure, getting chicken from a chicken sometimes requires more effort than opening a can, and making dressing from scratch can be a tad more trouble than buying a bottle. For the little bit of extra effort, though, you really do get a spectacular salad. You can eat it by itself. You can put it on a sandwich. You can serve it to guests. If the queen comes over, don’t even worry! You’re all set with this chicken salad. You wouldn’t pop open a can of chicken for the queen, would you?

Besides, as I mentioned earlier, the dressing isn’t even a big deal to prepare. Especially with the help of The Machine. 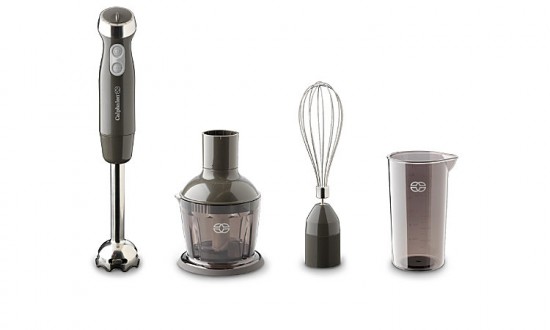 You just blend up a few things—a few regular ingredients, and also some anchovy paste.

(For the record, I think having anchovy paste in your fridge is a real sign of maturity. On the other hand, holding your nose and making faces whenever you have to use the anchovy paste is a sign that someone has tampered with the first sign. Just look at it! It’s appalling. But it’s worth it.)

I used to have a bunch of tiny bags of the same kind of nuts in my pantry, purchased in different degrees of chopped-upness. Whole, sliced, slivered, crushed. Then I noticed that some things in my kitchen are sharp—like The Machine. Now I save a bundle on my nut bills.

In addition to being nutritious, super tasty, and fancy enough for company, I find this recipe is a great way put leftover chicken to work. John and I, in an effort to continue to eat healthfully but also live the appropriate lifestyle for Today’s Economy, have begun a weekly tradition of roasting a whole chicken for dinner on Monday and using the surplus (in the form of shredded meat and amazing stock) throughout the rest of the week. I can’t help but notice that it’s driving us to eat more delicious, healthier and cheaper meals, yet somehow it seems as though my daily cooking time has been reduced. Pretty sure that’s impossible, but there you have it. 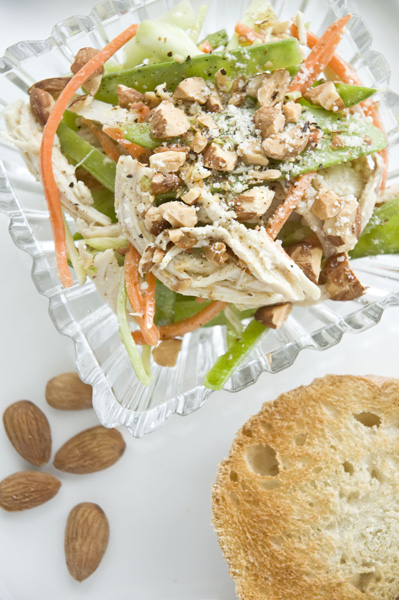 This is the only way I ever make chicken salad, and has been for some time, but it was Kitchen PLAY’s Virtual Progressive Party that finally persuaded me to nail down the ratios and share it. In a not-unrelated turn, Calphalon was kind enough to supply me with their new 3-in-1 immersion blender, which, I have to say, has made this recipe a flippin’ breeze: it does the job of a blender, a beater, and a food processor, with a good deal less washing-up. But don’t worry! If you don’t have access to this little miracle toy, you can still enjoy a great chicken salad—I’ve noted alternatives throughout the recipe.

Oh, and, one last thing: Calphalon is also sponsoring a giveaway at Kitchen PLAY, and all U.S./Canadian bloggers are eligible! To enter, just recreate any recipe from this month’s Progressive Party, then post about the experience on your blog and provide a link to your post in the comments on Kitchen PLAY.  All qualifying bloggers in each course will be entered to win a Calphalon Kitchen Electrics prize valued at $100 (6 prizes total).  The deadline is November 30, 2011, and there is a complete set of contest rules you’ll need to check out before entering. Good luck!