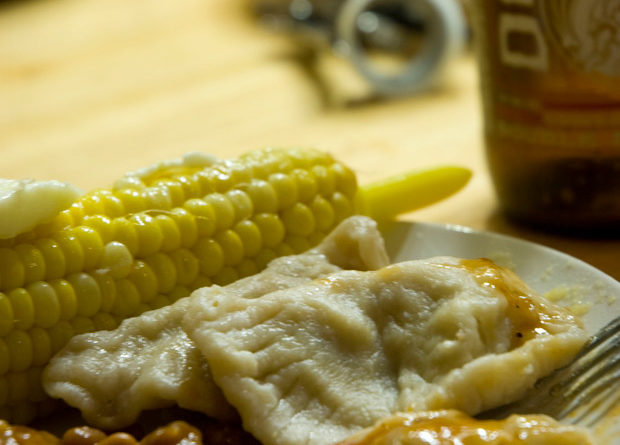 The August 2010 Daring Cooks’ Challenge was hosted by LizG of Bits n’ Bites and Anula of Anula’s Kitchen. They chose to challenge Daring Cooks to make pierogi from scratch and an optional challenge to provide one filling that best represents their locale.

There’s this amazing barbecue place called Spiced Right Ribhouse a stone’s throw from where I live in Metro Atlanta. On second thought, no, I couldn’t hit it with a stone from my front door. But if I ran down to where my stone landed and threw another stone from there, and then caught up with it and threw it again, I’d probably have to do that, oh, no more than ten times and I’d be at this barbecue place.

So it’s walking distance and it’s really, really good. They have live blues and this really soft, creamy, fluffy corn casserole. I’m told the fried okra is usually excellent, too, and I’ve tried it and it was great, although I have no idea how to judge it against other fried okra. They’ve also got their homemade barbecue sauce in bottles on the tables, and there are no lids on the bottles, which seems very strange but really authentic for some reason. Maybe that’s offensive? I don’t mean to associate barbecue with people who don’t know how to put a lid on a bottle, or who walk down the street barefoot in overalls or anything. I think I just mean it seems extra homemade.

If you’re ever in the neighborhood, you should definitely stop by this place. (If I see you outside throwing rocks and chasing them, though, I’m going to hide from you, so you might as well not bother. It is not an effective way of looking me up.)

This was my first Daring Cooks challenge, and it was surprisingly relaxed. Make pierogies. That’s it. They told me to make whatever pierogies I wanted, and the only requirement was that I make everything from scratch.

Somehow, as loose as the restrictions were, the pierogi of my dreams still didn’t qualify. Because all I wanted to do was stuff Spiced Right’s pulled pork into a delicious dumpling and dip it in fantastic lidless barbecue sauce.

That’s why, in the spirit of fighting and sometimes striving, I decided to make a dinner pierogi and a dessert pierogi. The dessert one is made fully from scratch, dough, filling, all of it. And the dinner pierogi? Half a pound of pulled pork to go, please, Spiced Right! Extra sauce if you don’t mind. 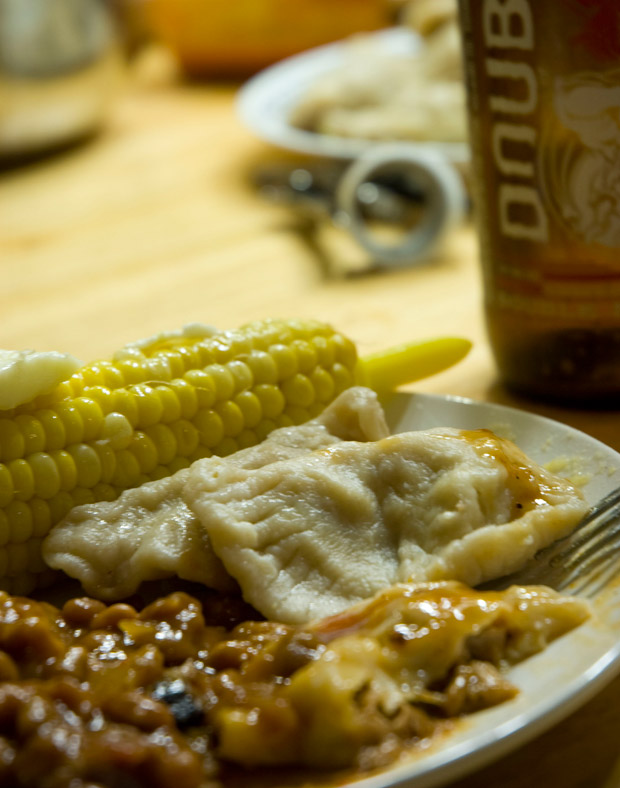 Now, half the flavor in this little two-course extravaganza is derived from the juicy alliteration. Pulled pork pierogies precede plum-packed pierogies for the perfect P-is-for-Pierogi, Sesame Street-style summer supper.

I tested them on John, Duck, and Duck’s girlfriend, with baked beans, corn on the cob, and a glass of Stone Double Bastard Ale. The pulled pork pierogies let everyone fully enjoy the delicious flavor of pulled pork and barbecue sauce, while consuming less than half the meat we normally would in a typical barbecue meal and replacing it with delicious starchy dough. Healthier? Er… maybe just…different. Still, cutting back meat leaves more room for sides, and everyone knows sides are the best part of barbecue. Maybe not everyone. Me, though. I know it all day.

What’s interesting is that even though the plum pierogies are pretty much the same thing with a different filling, they make a surprisingly classy dessert in contrast with the down-home-dumplingness of the pulled pork pierogi. The plums, sugared and dusted with nutmeg, have a sweet but complex fruity flavor that’s  interesting with the doughy pierogi and sweetened sour cream.

Pierogies are simple once you know what they are, and assembling them is easy. Here, I made you a diagram. (Note: This diagram still applies even if you are using some filling other than flowers.)

Oh, one last thing before I give you the recipes. Let’s talk about the photographs. They’re not great, right? I’m not going to make excuses. I took the pictures at dinner, rather than setting them up properly with, oh, light. That was the choice I made, so the pictures could’ve been better. But I’m going to level with you.

They couldn’t have been much better.

Pierogies are greyish and rubbery-looking, and I won’t go into detail comparing them to, for instance, skin, because I don’t want to put anybody off. All I’m saying is they taste a whole lot better than they look, but you can expect yours to be ugly, too. 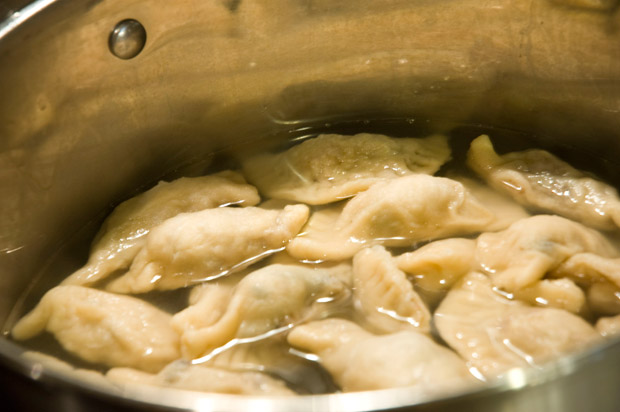 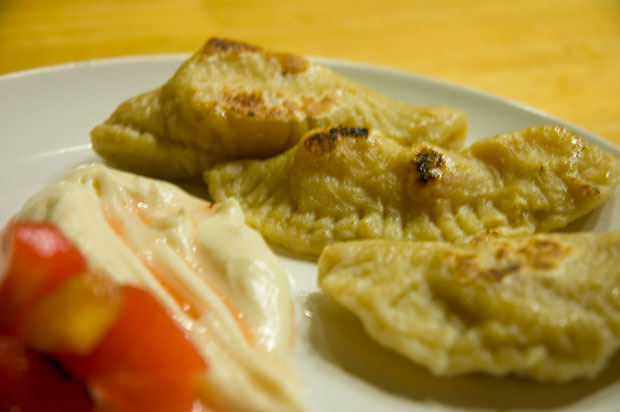