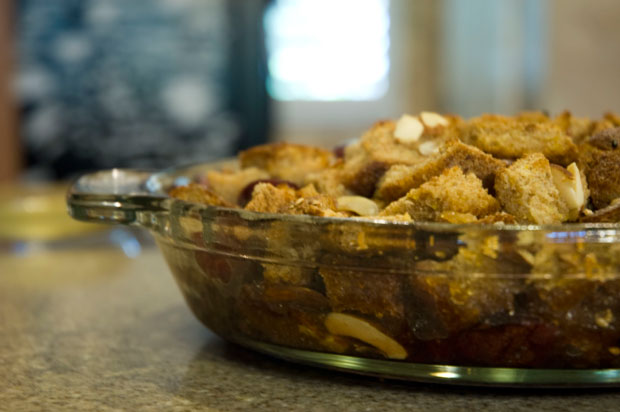 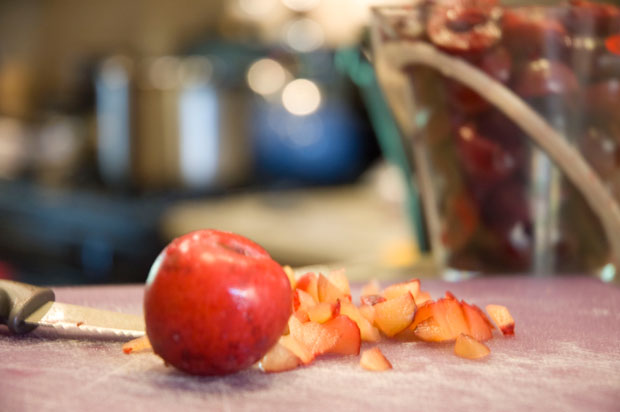 Our cupboard is pretty bare, but as usual, we haven’t felt like going shopping. So when I woke up today to no milk and no eggs, I had to figure something out armed with only the Internet and a half-eaten bag of cherries. (I already had an advantage, because the Internet is amaaazing, and at least it wasn’t a bag of half-eaten cherries.) A quick assessment of the kitchen turned up staples — bread, butter, flour, sugar, and so on — and some curious odds and ends, like lonely-hearted fruits left over from our last trip to the farmer’s market and small, opened bags of various nuts. I didn’t want to do any actual work first thing in the morning, so I wondered if I really had any appealing options.

Lucky for me, Joy the Baker has already adapted The Pioneer Woman‘s apple brown betty recipe to use cherries, and lucky also for me, I totally think pie counts as breakfast. Wheat-bread pie doubly so. In fact I’m pretty sure it’s so healthy, they should start serving it in school cafeterias. It would be an improvement over breakfast-pizza, to say the very least. 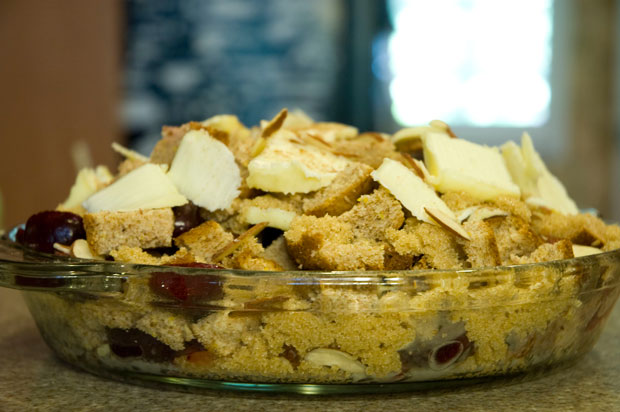 All you need to make a cherry brown betty is some cherries, some brown sugar, some wheat bread and some butter, and I had all those things, plus sour plums and sliced almonds. I guess I need to take a step back and reevaluate what it means to have no food in the house. Even here in the first world, thousands of people open the fridge every day and find nothing but a bottle of ketchup and two cans of beer. Hey, I think I just wrote a PSA! Somebody call that guy from ER.

But enough about groceries. I’ve never had a brown betty before, so I don’t know if mine turned out right, but it turned out very well. I added the sour plums for two reasons.

With the plums added, it was still very sweet, but within reason. You can definitely make it plumless, of course—just follow the original Joy the Baker recipe.

The almonds were an afterthought, but they were nice for a little variety in texture. I also added nutmeg to the recipe, and reduced the butter by 1/3. Don’t worry, it’s still very, very buttery.

The warm brown betty was delicious with a side of salty bacon (which we also had on hand), as confirmed by my brunch test panel:

The best part: This recipe is stupid easy. It’s, like, dump-cake easy, except you don’t use a cake mix, so depending on what kind of bread you have, it may or may not be better for you. Plus dump-cake seems a little difficult to disguise as brunch, whereas this is something I would make for breakfast even if starvation wasn’t my only alternative.

Wow, what a soggy endorsement that was. Seriously, though. It’s very good.