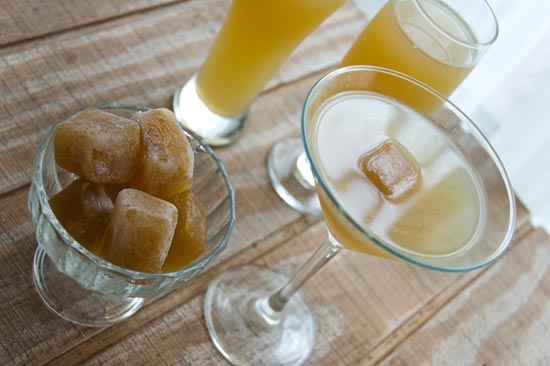 Picture it. You’ve just enjoyed a spectacular roast chicken dinner. You sit back, your eyes glassy with contentment, and gaze at the derelict carcass before you. Soon, you’ll heave yourself up from the table and scrape the platter into the trash with the satisfaction of a chicken well enjoyed.

“There’s certainly nothing else I can make out of this,” you think. 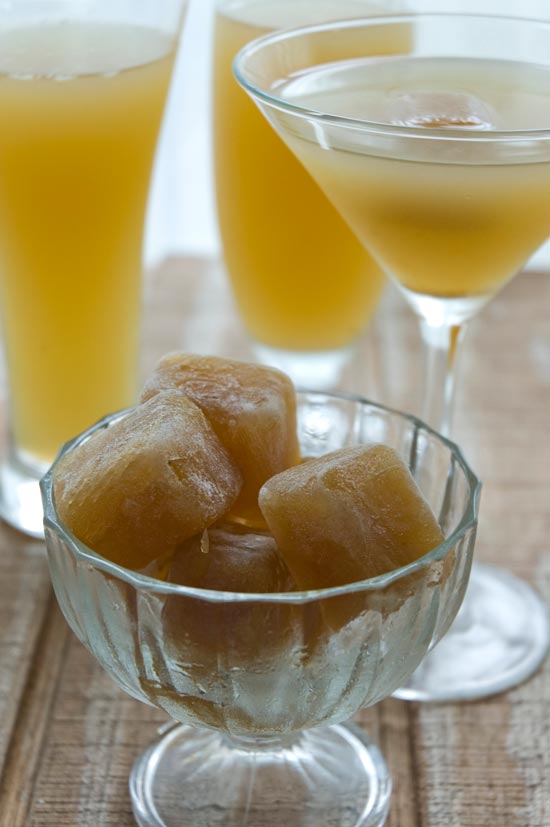 You’re so stupid—to borrow a phrase—because baby, there’s still plenty of meat on that bone!

What? Am I the only one who feels like watching TV today? Okay, I’ll make you a deal. I’ll stop adding distracting video links if you you agree to bone up (see what I did there?) on homemade chicken stock and stop buying expensive, salty chicken stock from the store when you want to make soup, lovely flavored rice, or chicken martinis.

Also consider that if you say no, you have no idea what kind of ridiculous links I might throw at you. I’ve got some favorites.

Well, since you asked.

Roasted vs. raw bones
All you need to make stock is water and some kind of bone. Does the bone have to be roasted? No. You can use raw chicken bones, although the flavor will be different. Roasted chickens just taste better than raw chickens. Ask anybody. Except foxes.

Vegetable scraps
Adding vegetables to your stock will make your stock taste different. More like vegetables, basically. It’ll also add some vitamins and, I don’t know, health particles or whatever. Nutrition, blah blah blah. It’s a good idea to add veggies, is the point, especially because you can just throw in the scraps from vegetables you’ve already eaten (pepper tops, tomato ends, onion skins) rather than wasting perfectly good vegetables. You’ll strain it all out later, so anything goes! Think of it as garbage soup. Just try not to get carried away. Rocks and pieces of lint have minimal nutritional value.

Boiling vs. simmering
You aren’t supposed to boil stock. You’re supposed to let it simmer, for hours and hours. Are you ready for some science? Because ever since you selfishly forbade me to watch TV clips on YouTube, I’ve got nothing but time. Let’s do this.

The first thing you need to know is that as the chicken sits in the hot water and gets broken down by the heat, it produces a kind of muck. (That’s right. Muck. I’m not trying to overscience you here. We’re calling it muck.)

Now, you probably already know this, but when a liquid simmers, the bubbles stay at the bottom, and very few, if any, float up to break the surface. If the liquid and everything in it is kept just below the boiling point, it’ll simmer happily along and remain relatively still. When you boil it, on the other hand, bubbles in untold numbers barrel toward the surface like hordes of chicken-jostling visigoths and disturb the hell out of everything in the pot, including, in this case, your muck-producing chicken carcass.

It’s not the chicken carcass’s peace of mind you need to worry about; it’s the muck. If the water simmers, the muck mostly stays on the bones until it gently floats to the top, where you can skim it off. At the end, you remove the bones and hey, clear stock. But if droves of crazed bubbles are allowed to run rampant, the muck shakes off and gets distributed throughout, resulting in a cloudy stock. So. Science.

Does cloudy stock taste different from clear broth? No, not that I’ve noticed. It just doesn’t look as nice. Maybe your stove, like mine, does a thing where it holds a temperature for hours and then, bam, raises it ten degrees when you walk away so that you come back to an effervescent nightmare. Don’t worry. The simmer-don’t-boil thing is mainly cosmetic, as far as I know. 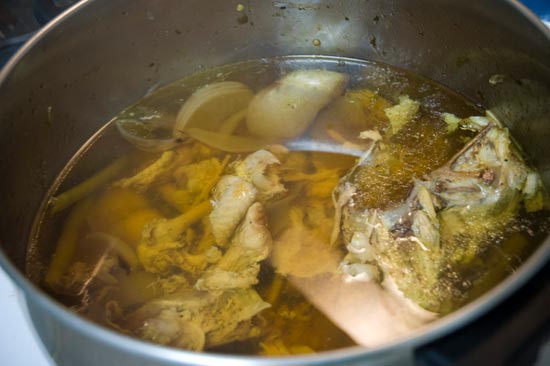 Straining
When your stock is done, it will look a lot like an ancient shipwreck. If you’re anything like me, it’s best to keep your mind off this resemblance, lest your imagination start turning it into something icky you want nothing to do with. You need to gird your loins and remove all the floaty, fluttery solids (oh god, I’m grossing myself out) by pouring the stock slowly through a strainer.

If you’re trying to make the clearest clear broth, then at the outset, you may want to bundle any seasonings and particularly small particulates into a little sachet, rather than just tossing them into the pot with the chicken. Cheesecloth should do the trick, but don’t ask me to elaborate, because I have never needed the clearest clear broth. I also don’t go out of my way to season my broth, for two reasons: There’s always plenty of seasoning already on my chicken and leftover veggies, and my broth usually goes into reserve for all kinds of future cooking, where a lot of seasoning might limit its uses. Instead, I wait and season the thing I’m using the broth for. 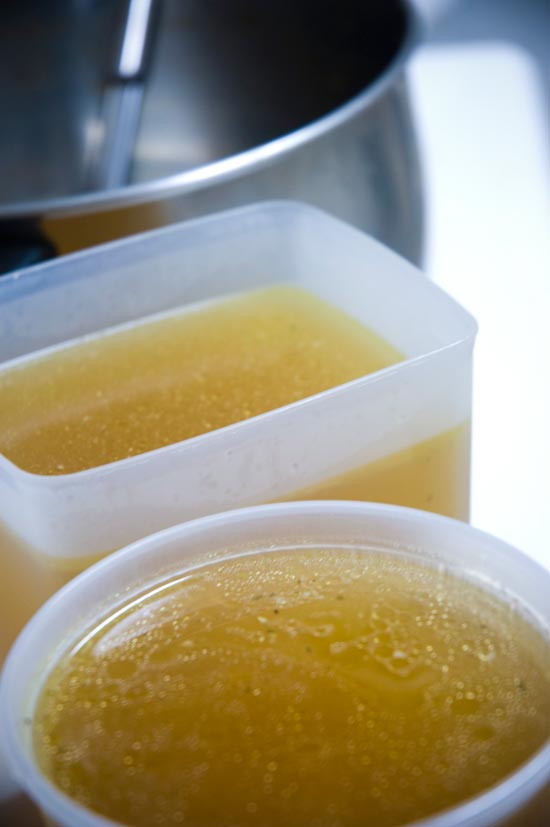 Storage
In my fridge, fresh chicken stock keeps for about a week. Your mileage may vary, but the bottom line is that you’ll know by the smell if it’s too old to use. In the freezer, on the other hand, it lasts for weeks. How many weeks? I have no idea, because it always gets used up. So let’s say… uh, five. Five weeks. Probably. I have no idea. I made that up just then. Here.

After it cools, I like to freeze my chicken stock in ice cube trays, then keep the cubes in a big freezer bag until needed. Sometimes, I also freeze some in snack-size freezer bags, so that when I’m making something that requires quite a bit of stock, I don’t use up all my cubes. For some reason, it annoys me very deeply when I have to use more than five cubes of stock at once. What was the point of standing there like an idiot with the turkey baster and the ice trays if I was going to use a damn gallon of it at a time? I could’ve just put the whole stupid pot in the freezer and gone on with my day! Do you know how many videos I could’ve watched in the time I wasted? I’m not going to link to it, because I respect our arrangement, but off the top of my head I know I could’ve at least watched the one with “David Mitchell,” “childhood friend” and “bucket” in the title.

All right, thank you for holding up your end of the bargain. That’s all I have tell you about chicken stock, except that I don’t recommend putting asparagus in it. Oh, or trying a chicken martini, even as a joke, because I know you’re still thinking about it, and I absolutely wasn’t kidding about it being a bad idea. Hot sauce doesn’t help. Please let’s not discuss it any further.