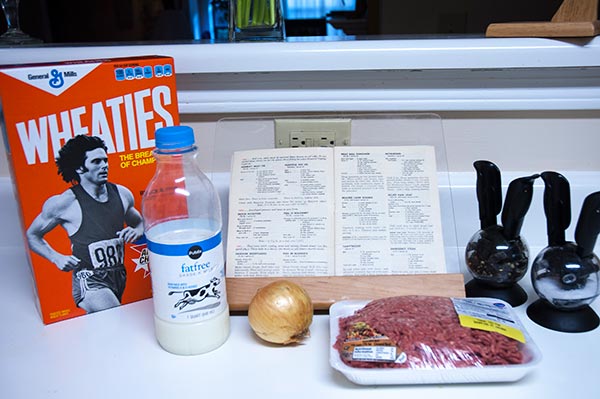 Today, we’ll be making the recipe for Emergency Steak on page 7. 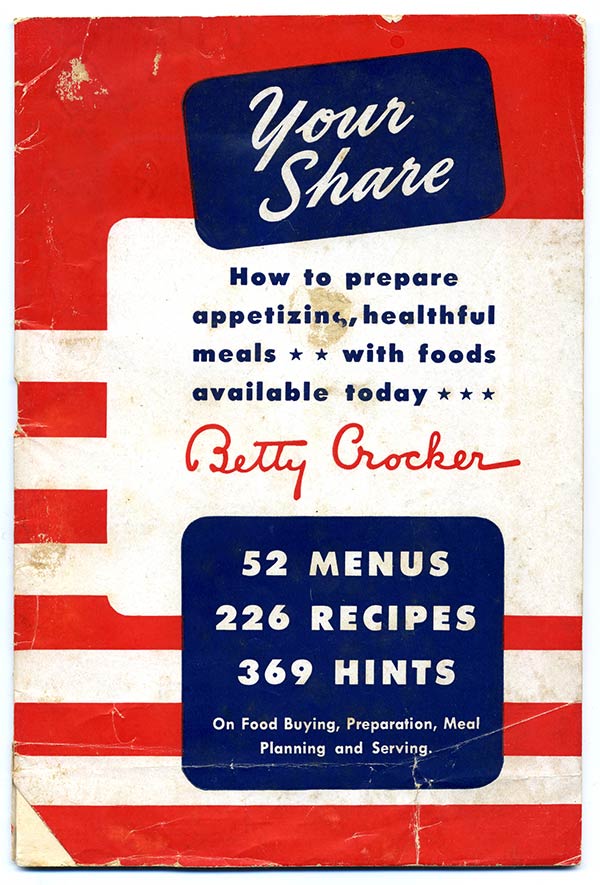 Your Share, the American WWII General Mills cookbooklet from 1943.

You may remember when I introduced this book on Veteran’s Day by outlining its nutritional guidelines. As I recall, we were all able to get behind its basic principles: butter, milk, and peanut butter as three-sevenths of your diet, potatoes as the poster child for all fruits, and some kind of cereal incorporated into virtually every meal. Every meal. Because General Mills.

Now it’s time to get cooking.

The first chapter, glibly entitled “MEATS,” kicks off with emphatic headlines, and the feeling that Betty Crocker is already disappointed in you. 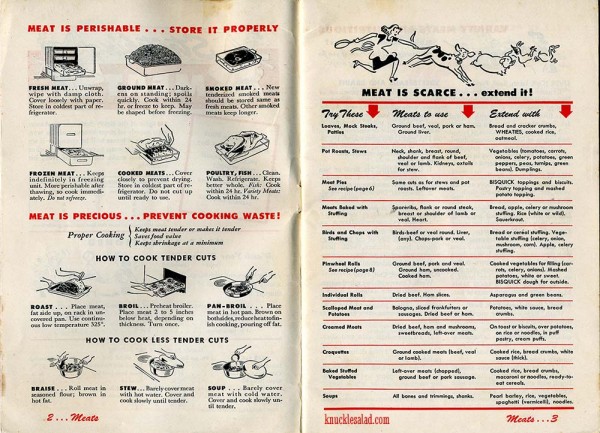 The next page continues with a cheerful look at preparation techniques for those leftover mammal-chunks so unappealing that the Army didn’t want them, not even to lob at the Germans. “Make them delicious!” the book insists, as a charmingly illustrated family eagerly enjoys the whiffs that waft off a platter of hot, fresh tongues. “Your family will like them if you fix them in these interesting ways.”

“Fix” seems pretty optimistic when you’re talking about soaking brains and dipping them in melted fat. You can fix the brains, but can you fix the nightmares? 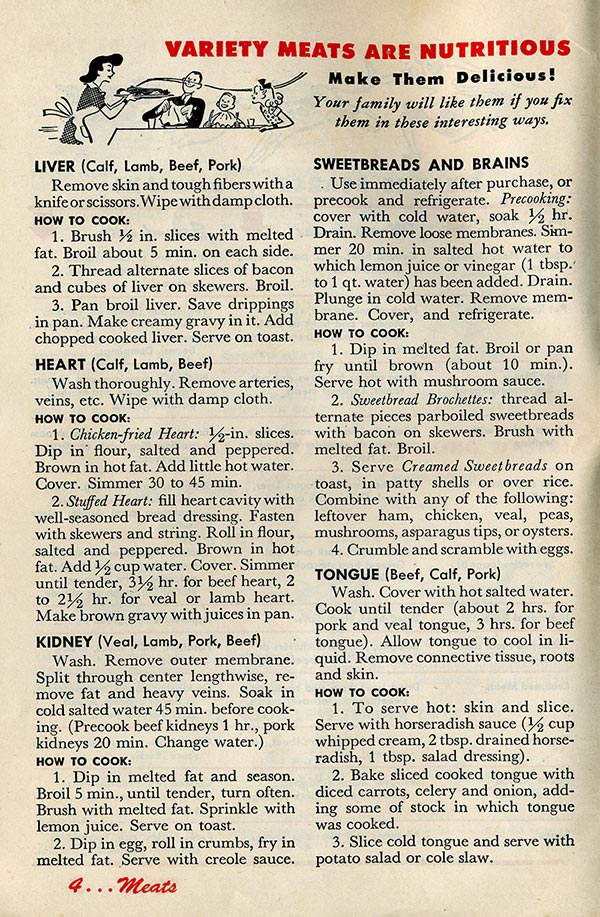 All things considered, Betty Crocker knew what she was doing when she included these recipes. Once you’ve faced the reality of a heart stuffed with bread, recipes like “Full o’Bologney” and “Jellied Ham Loaf” induce a flood of comfort and relief that would otherwise be absurd. 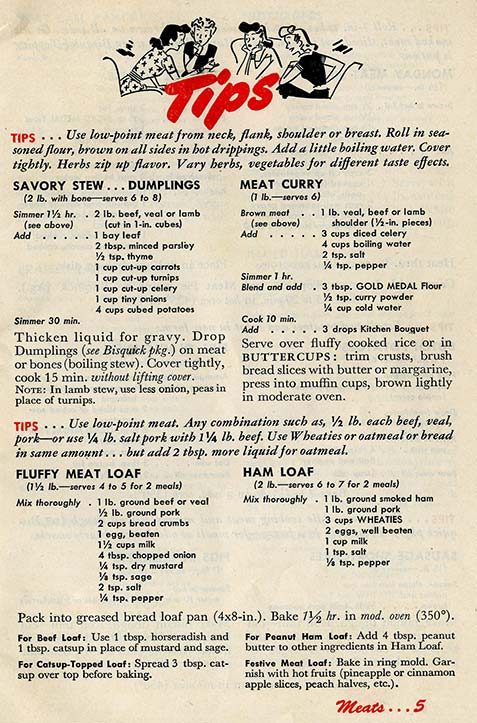 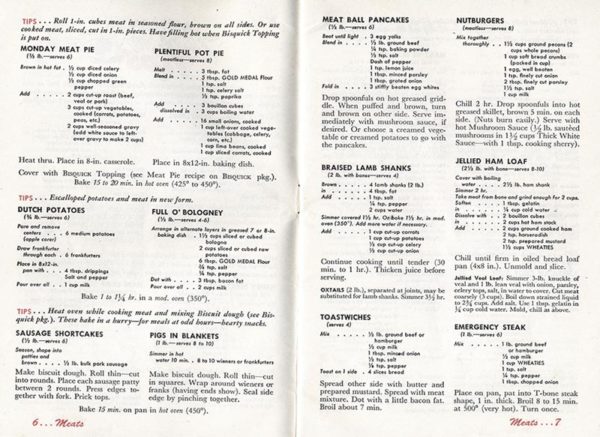 “Nutburgers.” I like that. Not to eat—just as a figure of speech. “Get a load of these meat ball pancakes! Totes nutburgers.”

Back to the point. Here’s what I know about wartime rationing: meat (non-variety meat, at least) was tough to come by. People got tired of subsisting on milk, beets and earthworms, so they came up with creative and pitiful ways to approximate the foods they missed most. To me, this is one of the most fascinating and humbling things about our grandparents’  dinnertime contribution to the allied effort. That’s why, even with so many potentially inoffensive recipes to choose from (yeah, I see you up there, pigs in a blanket), I chose to make an emergency steak out of ground beef and Wheaties.

You’re right, that’s only half the reason. A sadistic part of me kind of wanted to mush dry cereal into a bowl of meat. I can’t provide an explanation for this.

Here’s the recipe so you can follow along at home, which you truly don’t need to do unless you are reading this from a future so unfortunate that the following photos have begun to look appetizing. If so, bear in mind that this “steak” is likely to disappoint even you.

I took photos of the process. I don’t know why. To save you from your own curiosity, I guess. Now you have no reason to make it yourself.

What I thought the Wheaties would do: Provide a textural variation, maybe some kind of crunch.

What the Wheaties actually did: Soaked up and retained the grease that the beef tried to release into the pan. Waste not, want not, people. THERE’S A WAR ON.

What the Wheaties actually actually did: Ensured that whatever happened in the world, Wheaties sales thrived. Well played, Betty Crocker.

I’ll tell you what, though. If your emergency is that your family desperately craves an impossible-to-procure steak, then yes, a few mouthfuls of grey, underseasoned cereal-meat is bound to shut them right the hell up. So…I guess it’s…a success?