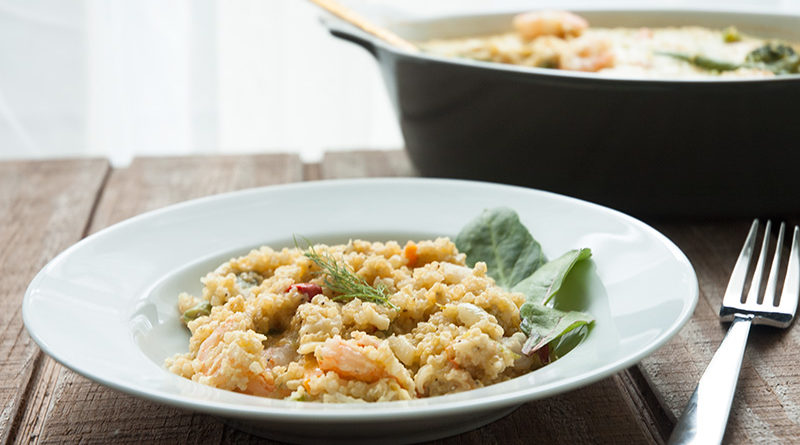 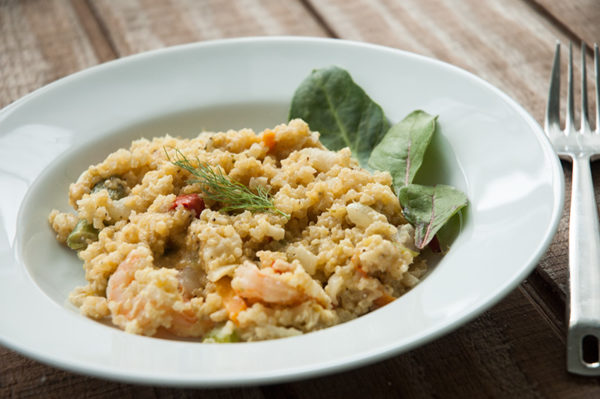 We went through a quinoa phase. It was a few years ago. Quinoa was a miracle! Where had it been all our lives? Who had kept it from us? Whoever it was deserved to be locked up! In a big dark storehouse! With pasta and rice and no quinoa! He would get so fat! Fat justice! 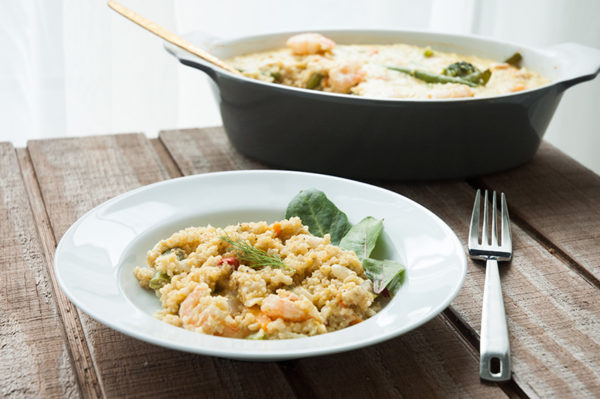 Then we overdid it. We tired of quinoa. Instead of adding it to our every shopping list, we now had the same dusty Trader Joe’s box in the pantry that we’d bought when we moved in. The international grocers and bourgie farmers markets had started to carry whole aisles of weird grains we’d never heard of, and we were too busy sampling each and every one (often with sensationally disappointing results) to bother with quinoa. It might as well have been dumb old oatmeal for how much it excited us—not that it wasn’t still delicious, but to be honest, so is oatmeal. For a while, I guess we forgot how delicious quinoa was. 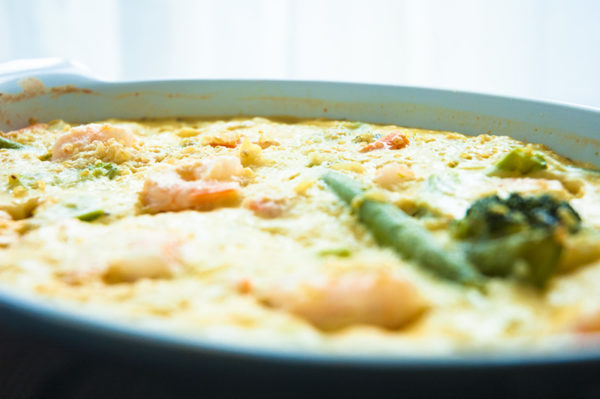 Now I’m excited about quinoa again. Quinoa and vegetables in a little bit of light, flavorful comfort-food sauce with tasty shriiiiimp! Sorry, started to turn it into a song at the end there. I did tell you I was excited.

I don’t know if it’s the influence of all these vintage cookbooks, but I won’t lie to you—baking quinoa with a little cream and American cheese (please bear with me, American cheese haters) is just what the doctor ordered. Not the cardiologist, maybe, because I’ve basically taken a hippie-caliber superfood and added cream and American cheese (again, snobville, bear with me), but the benefits outweigh the saturated fat, so if you’re feeling uptight about it, you can probably thaw yourself out and give it a try. There’s a table of nutrition data at the bottom of this post. See for yourself.

Speaking of thawing oneself out, I know a few of you are tempted to dart into traffic right now over the mere mention of cooking with American cheese. I understand the source of your despair, but I would remind you that in this recipe, it’s not standing in for actual cheese. You’re not replacing gruyere or cheddar with a pale imitation of how-can-you-even-call-that-processed-crap-cheese. There is valid debate over whether there is any reason to call it cheese, but cheese or no cheese, it is an ingredient, and sometimes it is the most applicable ingredient for a recipe. A rich, lightly salted cream sauce is exactly the kind of thing a little American cheese is ideal for. That doesn’t mean you couldn’t instead use a cheese sauce made with gruyere or cheddar, though! Give it a try! Just know that you are not substituting a good cheese for a dark and evil imitation of cheese; you are substituting cheese into a recipe that doesn’t use cheese.

Well, except that it does also use some cheese. A little bit of mozzarella and parmesan. But you know what I’m saying. 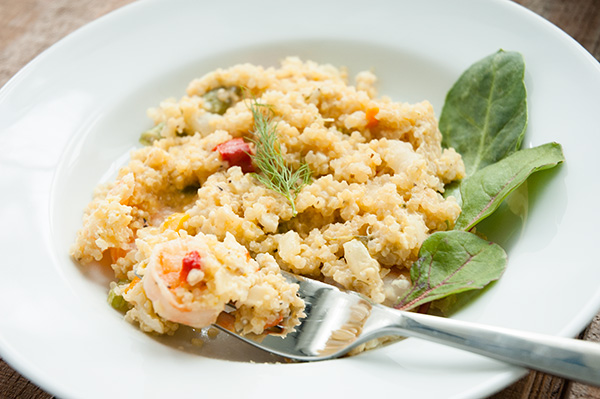 Bottom line? We are extremely not bored with quinoa anymore. Totally into it again.

As usual, it helps that this is a low-stress, quick-prep recipe, loaded with both flavor and shortcuts, so I think you’ll be pretty happy with the results.

Below, just for fun—if that’s your idea of fun—is an estimate of the nutrition data for this dish. One serving clocks in at a reasonable 240 calories and 21 grams of protein. Even the fat calories (about 66, if my math is right) are behaving themselves—and check out that riboflavin! I mean, it’s all numbers to me, but it seems pretty healthy for something with cheese and cream.