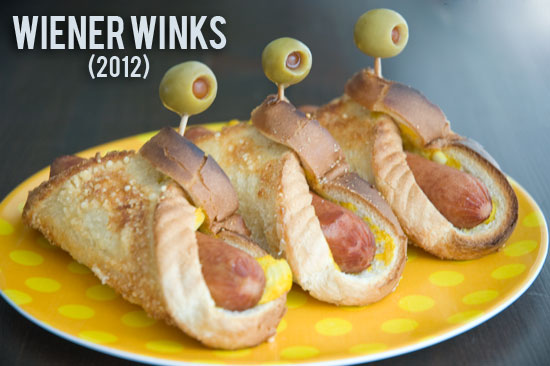 There’s a reason I no longer frequent the used-book section of thrift stores. I’ve learned that the novelty of an armload of weird old books costs more than the combined $.90 sticker price; in reality, it costs $.90 and enough space in our little apartment to store it. We can’t afford that, so I don’t bring home weird old books anymore.

Unless I absolutely have to. 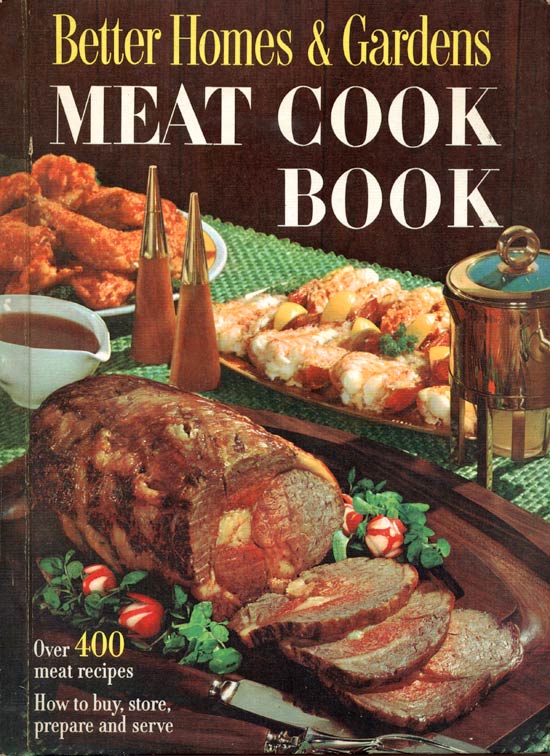 In 1965, Better Homes & Gardens published a book by the rather spartan name of MEAT COOK BOOK—a title which, as a cursory glance reveals, is not a Cookie Monster-style declaration of meat’s long-overdue revenge on literature. Nope, it’s just a cookbook about meat, or more aptly, a cookbook just about meat. Meat on sticks, meat in spreadable rings, meat smothered in shredded Velveeta. Apparently, this thrilling work of culinary nonfiction was so successful that by 1967, it had reached its eighth printing. 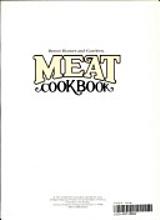 Eight printings! In two years! This being Better Homes & Gardens, you can assume that these were probably large printings, which were followed by still more printings, judging by this 1977 cover (left). Therefore, by my calculations, sales of this book are now climbing toward, or have indeed reached, infinity.

I’ve inspected MEAT COOK BOOK to exhaustion, gawking and saying things like, “This recipe calls for ‘fat’—not ‘oil’ or ‘butter’ or ‘lard’ but LOOK, it says the actual word ‘fat’ right here in the ingredients! ‘FAT!'” and I can tell you that it’s in remarkable condition, with nary a splatter or errant smear anywhere within its pages. That’s because presumably, the previous owner(s) received it as a gift (“What do you get the girl who has everything and loves mixing ground beef with mayo?”) and never took it anywhere near the kitchen.

Or maybe the previous owner(s) loved it so much that they bought two copies, one to use and one to cherish. For every book like mine, there could be another out there in which “Liver Loaf,” “Bologna Bake” and other alliterative atrocities are dog-eared and stained with decades of pig’s blood and memories.

If that second theory seems like a stretch, consider how unlikely it is that an unpopular book, purchased only as a disappointing gift, could’ve remained in print for at least 12 years. Seems improbable, right? So is MEAT COOK BOOK, as it appears, the worst cookbook ever assembled, or is it an important and beloved building block in the history of American cuisine? Part of me (the part that abandons metaphors) wants to know for sure.

That’s why I’ve decided to use MEAT COOK BOOK. I’m going to make these recipes. I might be the first, or it may be a well-traveled road, but I intend to select some of its many objectionable dishes and test them one by one to find out if the home cook of 1967 really had it as tough as it looks. Perhaps she gripped the laminate countertop for support as visions closed in on her of sliced cow’s tongue bubbling beneath a cookie-and-raisin sauce (page 65, I’m not even kidding). Or perhaps the recipes I now turn my nose up at—anything involving non-vegetarian jello, for instance—are fabulous delicacies that have simply fallen out of fashion. Looking ahead, I think my biggest challenge may be finding a market that will sell me a can with an entire ham in it. But I’m going to do it. I’m going to taste 1967. And you’re coming with me.

Are you ready to see some franks go fancy? Because, you guys, they are about to go SO FANCY.

There they are! No, not there…up there, peeking out from the upper right corner—see them? Wiener Winks. Look how fancy they’ve gone in their toasty jackets! We don’t need to talk about the nightmare-red “creole” skillet, or whether the “sour” part is the pineapple juice or the ketchup, because we are not in fact going to boil any hot dogs in “sauce” today. But we are going to send some franks very, very fancy. (Fun 1967 fact: “toasty jacket” appears to be another way of saying “piece of toast.” Let’s bring it back.)

I’ve selected this as my starting point because, while the presentation is whimsical and absurd enough to be considered almost deranged, Wiener Winks are still basically made of foods I can imagine eating together. Okay, maybe not the Parmesan cheese. But mainly. So this is how we’ll get our feet wet, because I don’t think we’re quite ready for “Ground Beef in Sour Cream” (page 117). Not yet.

Wiener Winks call for butter, but butter is absent from the list of ingredients, as if it were as common as water. It’s assumed that the home cook of 1967 has a stick of butter in at least one of her hands at all times. I’m surprised the recipe doesn’t instead specify when it wants you to refrain from buttering something. “Butter only one side of bread. Dip in not-yet-buttered cheese. Combine onion with mustard and no butter; spread on unbuttered side of bread and place a butterless frankfurter diagonally across each slice.” That’s probably the only way to get a recipe across accurately. Because, let me remind you, the ingredient “fat” does make it onto the ingredient lists of several of these recipes. But butter? Well, obviously you’ll be using butter. You’re cooking, aren’t you?

This recipe gets major points for ease of preparation, a respite for which I’m sure the home cook of 1967 was grateful after weeks of directions that casually began with phrases like, “Remove skin from picnic” (page 46). Not today, little lady! Chop up some onions, butter some bread, and boy howdy, you’re halfway home! I can almost smell those wieners winking already.

Despite its simplicity, I was challenged by this recipe in three distinct places. For one thing, I tried to stick the toothpick in laterally, parallel to the floor, rather than overlapping the two corners of the bread and jabbing down through the hot dog. That cost me some time. And then I burned everything, presumably because MEAT COOK BOOK intended for the food to be three inches from the fire, not the oven rack. Looking back, that seems kind of obvious. Apparently I am less alert than the standard 1967 housewife is presumed to be, Valium and all.

Oh, and the third challenge. The third challenge was that I forgot to cut the crusts off the bread. It was days before I realized that. Had I remembered, I’m not sure there would’ve been enough bread left to close with the toothpick, because it was a pretty tight fit already. Hot dogs, like hippies and neckties, must’ve been a lot skinnier in the ’60s.

Here’s a short video of John and me trying our Wiener Winks for the first time. My only regret is that I forgot to bring napkins.

As we all suspected (didn’t we?), the ol’ Winks didn’t taste all that bad. I mean, as long as you don’t eat the olive. Or you like olives. And butter. Really like butter. A lot. Because basically, these are just confused hot dogs with periscopes, riding around in buttery makeshift buns with a hint of Parmesan for absolutely no reason. A weird and unnecessary recipe, sure, but repugnant? No, not in the way that future recipes promise to be.

The question is, though, whether this is a point for or against MEAT COOK BOOK. I have no idea whose side I’m on.