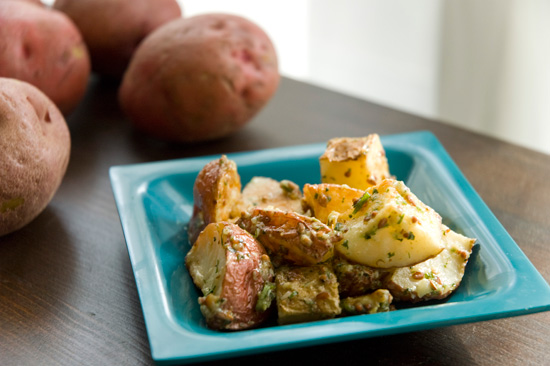 This potato salad is easy and makes a luxurious cold side dish, although when I decided to make it, I was a lot more concerned with the former. Because I’m lazy. Especially when I’m by myself.

John left town for a week, during which time I learned I’d been accepted into the upcoming Inman Park Festival, a bigger festival than I’ve ever done. I then spent countless hours toiling over new jewelry for the show. For company, I watched rerun after rerun of You Have Been Watching, 10 O’Clock Live, and Would I Lie to You, and by the end of the week I felt less like a delusional shut-in and more like a socially normal individual who had been hanging out with my friends Charlie and David. That was creepy of me. So I invited some friends over. Some actual friends. Who are real.

I invited them for dinner. There was time to shop, but I have a personality defect that makes it seem silly to go out if I already have something on hand that can suffice. Of course, the things I had on hand were extremely miscellaneous, because as soon as John’s plane had left the gate, I lost all sense of what time dinner was supposed to be and whether nachos counted, and it was four days before I actually prepared a meal rather than waiting until I was too hungry to cook and subsisting instead on occasional handfuls of trail mix. Trail mix wouldn’t do for a dinner party.

But I did have some potatoes to my name. Assorted potatoes. And a lemon.

I roasted a chicken breast, tossed some asparagus into the pan for the last 10 minutes, and served this roasted potato salad, which I’d made earlier in the day while tidying. After a week without supervision, the apartment had needed serious seeing to—I had literally turned every surface into a separate activity station, including the six-inch-deep railing around our patio—so in the morning, I chopped some potatoes and put them in the oven, and by the time I’d cleared the coffee table, it was time to mix up the dressing and stick the whole thing in the fridge.

It was perfect. The multitasking had made me feel like a clever cheat, but the potatoes were a hit and my friends seemed to regard dinner as somewhat fancy and special, which is important.

When John came home, he couldn’t tell I had cleaned up, which isn’t such a bad thing because restoring the apartment to Tidy Base Zero was no small feat itself, sloppy as that may still be. He helped me eat the leftover potato salad (all three bites) and I tried to think of something interesting to tell him that wasn’t about jewelry supplies or the scandalously weird cost-cutting measures proposed in Great Britain over the past couple of months (privatized motorways! granny tax! VAT on hot pasties, which doesn’t really sound like such a bad idea even if it is curiously specific!), which is to say, there’s been ample peace and quiet since his return. But I’m very glad he’s back.

Notes: I based this recipe—key aspects of it, at least—on Miss in the Kitchen’s Red Onion One Potato Two Potato Roasted Potato Salad, via Kitchen PLAY, a site with monthly menus that feature individual ingredients. The March/April ingredient sponsor is potatoes! Hooray potatoes! If potatoes ever run for public office, I should not be allowed to vote. I’m telling you now so that if it happens and you do nothing to stop it, you’ll know you’re equally to blame.

Add this recipe to ZipList!