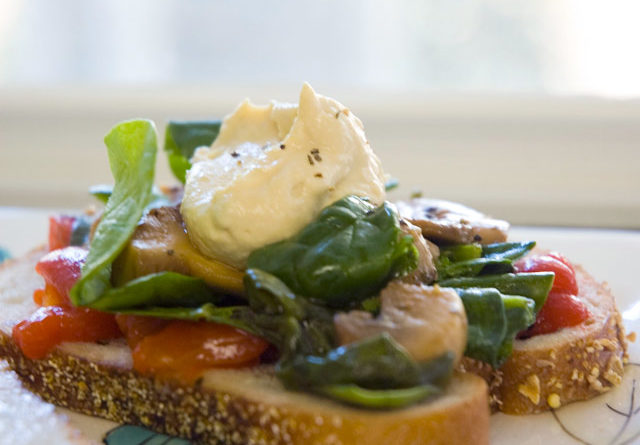 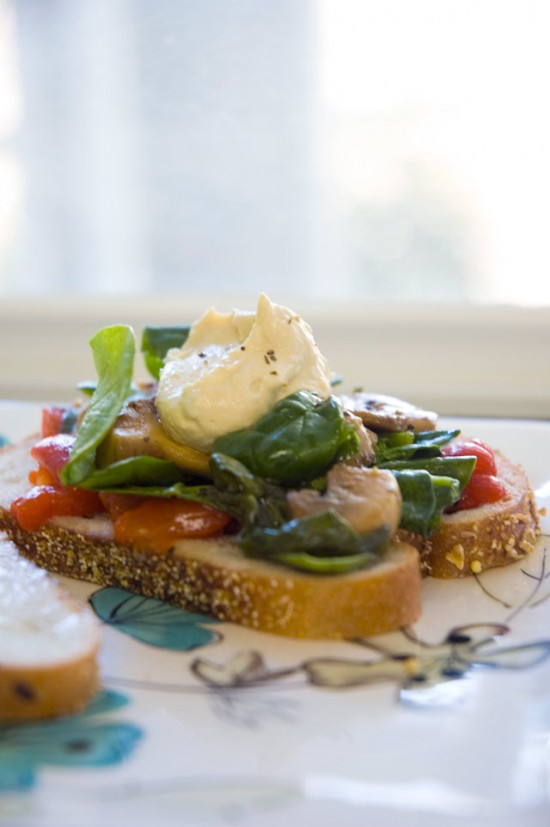 Does the idea of moving fill you with dread? It should. That’s a rational human reaction. I’m a little defective in that whenever someone talks about moving, I get all excited about decorating a new place and learning a new neighborhood and getting into new adventures and I don’t even have to tell you how wrong I am. Moving sucks.

That’s why I’m going to start this story by telling you how it ends, thus eliminating any rightful anxiety about the outcome: My mom lives five minutes away from us now and everything is great!

So let’s rewind. What was intended to be a long weekend spent packing in South Florida and driving up to Atlanta turned into nine long subtropical January days, while the ever-unprepared Atlanta was battered by a winter storm that outclassed the city’s five snowplows and made all inbound roads treacherous and impassable. John, Mom and I packed the truck and waited, stranded in an empty house with no furniture and no Internet access. We didn’t even have cable. Or a television.

Considering the complications and the fact that the house in question was the one I’d grown up in, where my family had been settled for over 25 years, the whole process was relatively painless. Of course, all four of us—Mom, John, me, and Mr. Beau Jangles, the aging toy Maltese with a penchant for vengeance and a passion for tiny shirts—experienced near-hysterical meltdowns over the course of the weeks surrounding our 12-hour sojourn to Atlanta.

John’s came first, down in Florida, when he was finally overwhelmed by the endless onslaught of invaluable possessions my mom and I asked him to somehow fit into the truck at the last minute. Mine came later, at our apartment, as we emptied the attic out into the loft to make space for the things I had brought back. Mom managed to keep it together until a few days after that when, exhausted from emptying dozens of oddly packed boxes of things that had seemed so important at the time, she was unable to find her iPod cable in any of four seemingly-random crates of A/V cables. And Beau… well, his emotional recovery has been a long one, marked by furtive urination on various household items, especially Mom’s new rug.

There is no mercy for those who disgrace the rug. Hence the incarceration of Mr. Beau Jangles. He is not currently authorized to supervise himself while important work is being done, such as the construction of a new TV stand. 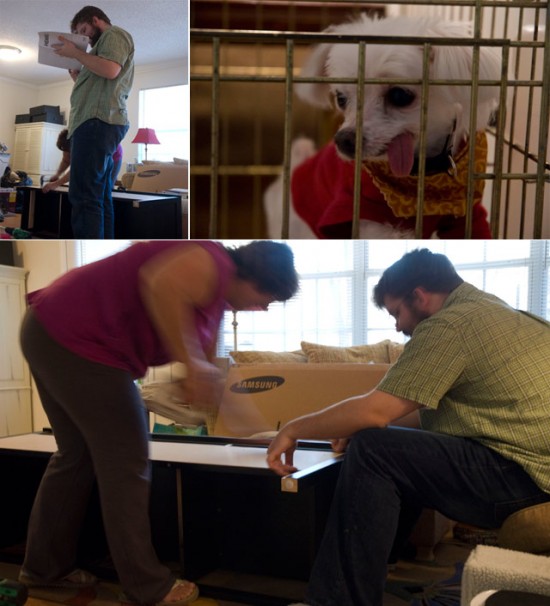 My mom is amazingly handy and capable. She and my grandma used to perform complex renovations on the house with the greatest of ease, including plumbing and electrical projects. She can figure anything out. And John has one of those brains that sees a mechanism and can guess how it works, which is a function so far from my own ability that I’m constantly in awe. Show him a bunch of disassembled parts and he somehow understands how they’re meant to fit together.

So I helped them with the TV cabinet for about 15 minutes before I wandered off to make lunch.

You know what else is rotten about moving? There’s never any food in the fridge, or there’s food in the fridge but it’s really random, like leftover meatballs and a bunch of condiments, and you’re not supposed to buy any new food because you’re moving out, or you did buy new food but you haven’t unpacked your pots and pans yet. But the next time you’re moving, try to pick up mushrooms, spinach, hummus and a fresh loaf of bread. It’s a good variety for unstructured guilt-free snacking, and snacking is king when you’re busy. (It even has “king” right there in the name.) Plus, once you unpack your pantry staples, you can use what’s left of your snacking provisions to make the easiest, most delicious hot veggie sandwiches.

We didn’t have any cheese the day we built the TV stand, but we did have the snacks, and it taught me something important about hummus. Actually, two things. First, that it’s more than just the evil progeny of the sinister chick pea, especially if it’s got other stuff in it like peppers, in which case it’s great and hardly evil at all. And second, in a pinch, it can fill the same creamy/fatty/substantial role that cheese normally does on my sandwiches. It’s a smart substitution, although obviously cheese has nothing to worry about. 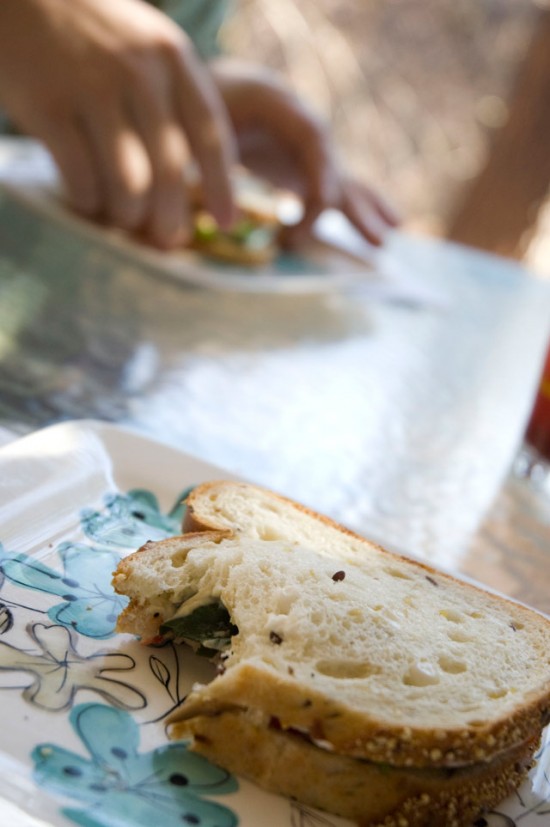 We jettisoned a lot of stuff down in Florida. A lot of stuff. Including all the dishes. When we got here, Mom got pretty new dishes that she really loves, to make it feel more like her own new space. And the TV stand was completed right after lunch, no thanks to me, in case you were in suspense about that. The apartment looks pretty and almost completely moved-into and even Beau will surely make his peace with the new arrangement before too long, although the last I heard, he was still on probation and if anyone has any suggestions for his rehabilitation we’d love to hear them.

In the meantime, things are still very busy for John and me so I’m going to keep the ingredients for this sandwich on hand, because we could all stand to eat more vegetables, and this is a surefire way to make them disappear. 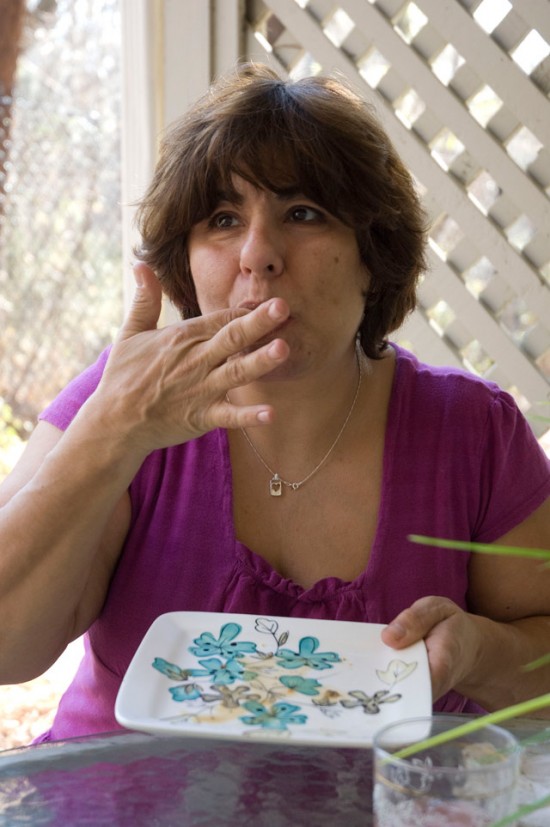 Note: As written, the recipe calls for a pint and a half of mushrooms. That’s a pretty good amount of mushrooms to shoot for, but use whatever you’ve got; if you’ve got fewer mushrooms and more spinach then you need not go shopping. Sandwiches are so adaptable. Everything works.