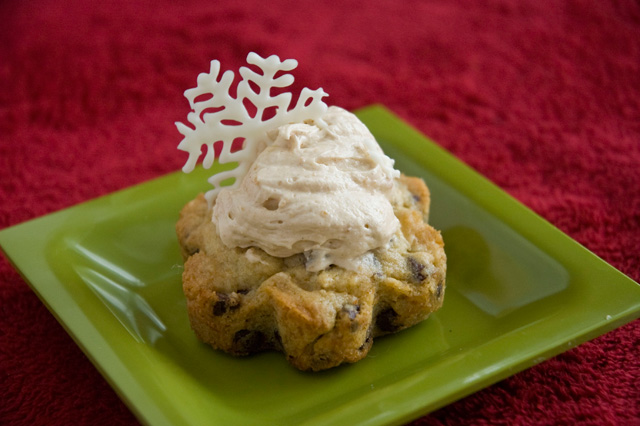 I’ve just received word that Chocolate Pink is, sadly, closing their doors. Goodbye, Chocolate Pink, and thanks for everything. You’ll be sorely missed.

NOTE: If you’re only interested in the Chocolate Chip Snowflake Cake recipe, click here to skip ahead. 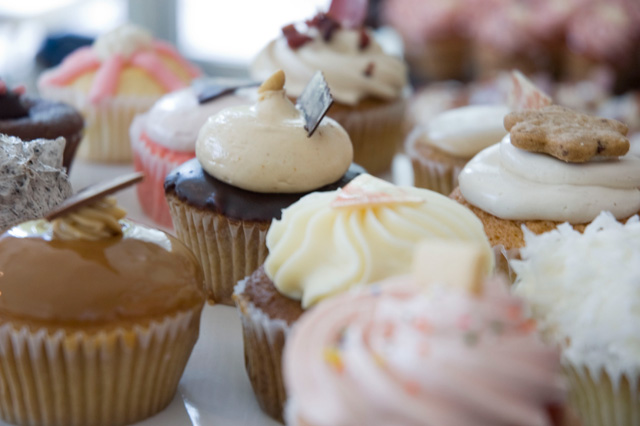 There’s strength in numbers. Whenever people say so, they tend to mean maybe some kind of military strategy, or fighting City Hall, or being escorted through a sketchy neighborhood. Screw that. Cupcakes, that’s what I’m talking about.

When I was contacted in September about starting a local food bloggers’ meetup, I didn’t imagine that by November, I’d be sitting in the event space of a legendary local bakery, being asked my opinion about their cupcakes. When I was just one little blogger, nobody ever called up to say, “Hey, Kristina, are you available to eat all our cupcakes please?” But that changed after we, together, became a few dozen food bloggers.

We were invited to cupcake contest at Chocolate Pink, where eight of their signature cupcakes would be ranked in four categories by Atlanta’s trusted food bloggers. Even me.

Just showing up to this thing, I felt like a celebrity. I mean, not right away, when I missed the sign and passed right by and ended up looking for street parking two blocks away because I was already late and it was a one-way street and I wasn’t even sure what cross street I’d be able to double back on. No, but after that, when I entered the bakery and the girl at the register directed me up the back stairs to a sunny room made of windows and gauzy drapes—that’s when I knew I was getting the VIP treatment. Once I got a look at the long table piled three feet high with tiny, gorgeous gourmet cupcakes, I was pretty sure actual celebrities wished they could trade places with me.

So I met the owners, Michael and Chef Christian, and tried not to make a fool of myself. And I said hi to AFBA organizers Mandy and Becky, who had made it all happen, and took a few pictures and made some new friends and sat down at a tiny table with the always-delightful Lynn Epstein, where we sipped our coffee and stared at the cupcake wonderland before us with exponentially increasing (thanks for that, coffee) anticipation.

Now, what you need to know about Mandy (below, author of Self Trained Chef) is that she, in addition to being an incredibly organized organizer with the RSVP-awaiting patience of a saint, is also possessed of a captivating level of enthusiasm that never fails to catch me in its wake. So when she kicked off the afternoon with a PowerPoint presentation on the history of the cupcake, I became temporarily engrossed in all its possible origins, temporarily drowning out my animal impulse to attack the cupcake display and eat them all up. 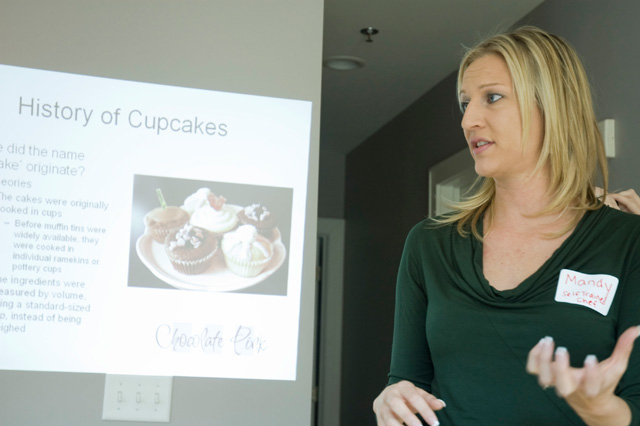 Then Chef Christian gave us a short history of Chocolate Pink, his own training, and the process by which he develops his recipes. He introduced his team and mentioned that his own career in desserts had been launched by his desire to meet women. I listened intently and laughed at the funny parts and never took my eyes off the cupcakes.

Cupcake, I thought. Over and over and over. They were so pretty. There was a pink one with a swirly part and a black and white spiky one and some with little patterned rectangles sticking up made of chocolate. Cupcake, cupcake, cupcake.

And then it was time.

There were eight cupcakes to try, and I needed to choose a winner in each of four categories: Taste, Texture, Presentation, and Overall. We were each delivered a sort of chart on which to create our own rubric, and two plates of four little cupcakes. The room, which had been abuzz for the last hour with lively discussion and picture-taking, fell silent except for the occasional reverent yummy-noise. 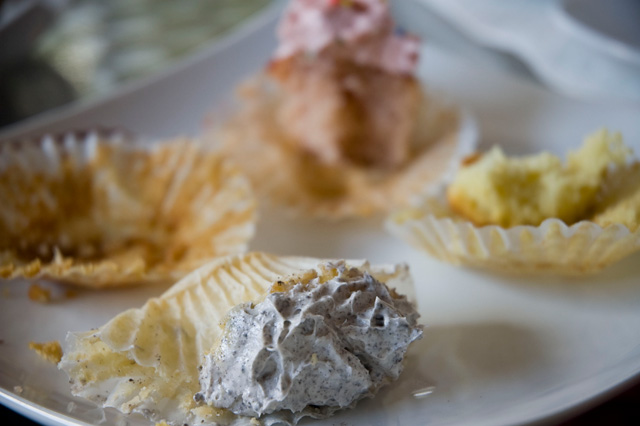 I loved most of the cupcakes, although of course there were some I just didn’t get along with (it’s not you, brown butter, it’s me). I wanted to choose a different cupcake in every category so that all my favorites could have a chance, but I had to be honest and choose the ones I thought truly deserved to be called the best. That’s how Chocolate Peanut Butter ended up being my favorite in both Flavor and Presentation, which meant it was a shoe-in for Best Overall. And Cookies and Cream was the hands-down Texture winner, as far as I was concerned: the cake was impossibly fluffy, with crunchy pieces of cookie inside, and the frosting couldn’t have been creamier. I was sorry I couldn’t give the melt-in-your-mouth Chocolate Fudge cupcake a nod: it was a close second in all three categories for me. But there was no second-place medal.

Apparently, we were all in agreement, and my choices ended up matching the winners precisely. If I had known, I would’ve put money on it. But I guess that would have been unethical. So pretend I said I wouldn’t have.

Everyone at Chocolate Pink was terribly nice, even going so far as to give us the recipe for the winning cupcake. I hung around for a while afterward to chat with owner Michael and bloggers Mandy, Becky, Tori and Maggie. While discussing what we planned to post about the event, I let them know it might take me a couple of extra weeks to get it done. I explained the commitments I’d made to craft shows, Thanksgiving, and Magic Is Science, the fledgling art collective.

To my amazement, Michael—whom I had met only that afternoon—offered to donate a selection of desserts for the art opening, in support of what our little collective was trying to do. I hardly knew what to say. I settled on “thank you,” although it seemed insufficient. Five days later, we were in possession of a breathtaking assortment of little cakes and tarts that (in conjunction with the elegant hors d’oeuvres generously provided by Avenue Catering) elevated our humble evening to a proper Art Event. We were profoundly grateful, and try as we might to leave everything for the guests, we six artists ended up sneaking a few tastes before they all vanished. That’s how I know that those beautiful bites were bona fide. 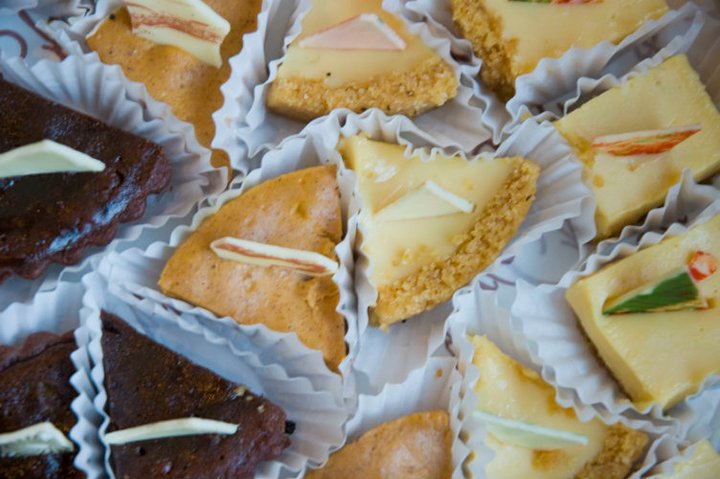 After the excitement was over, the Chocolate Peanut Butter cupcake and I were on our own, and it was time to get reacquainted.

Recipe in hand, I set my kitchen up for its next mission: to do justice to the best cupcake in a phenomenal bakery. And then I took a step back and accepted that that would never happen. Not only does my skill fail to live up to Chef Christian’s French training, but I don’t know the first thing about making a cupcake beautiful. What my baked goods lack in looks, they always make up in deliciousness, but that wasn’t going to cut it this time.

So I thought it over.

What had inspired me about Chocolate Pink was the chefs’ spirit of experimentation. Chef Christian had developed the Strawberry Pop-Tart cupcake because he had a weakness for Pop-Tarts and wanted to see how he could translate the flavor profile to a respectable dessert. That was an attitude I could get behind.

The peanut butter Swiss meringue buttercream had knocked my socks off. And cupcakes are great, but at the time, I knew where I could get that cupcake (although now, unfortunately, you will have to make it yourself from the original Chocolate Pink recipe, which you can download as a PDF), so I didn’t need to make one. Instead, I saw an opportunity to use this luscious frosting to invent a gourmet version of a snack I am not particularly proud of my passion for.

It’s a snack so wonderful that it deserves to be made into a proper dessert, meant as an homage to Chef Christian’s inspiring approach. 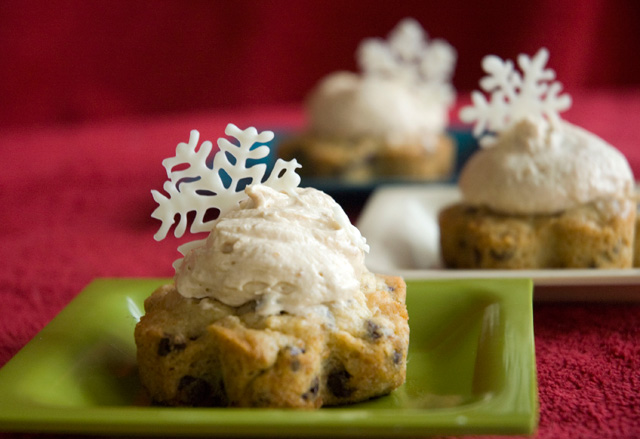 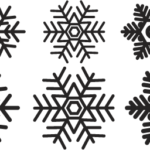 I tested and tweaked several cookie recipes before I hit the perfect soft, cakey, chocolatey one, and refrigerated the frosting to several levels of firmness in order to determine whether it would be possible to pipe it delicately onto the top. It wasn’t, at least not for me. So to save my dessert from ugliness, I melted some white chocolate in a bag, stuck an icing tip on it, printed out a few vector shapes as a template (which you can download: Snowflake template) to place under wax paper, and piped myself some pretty chocolate snowflakes. Time-consuming maybe, but easy enough. 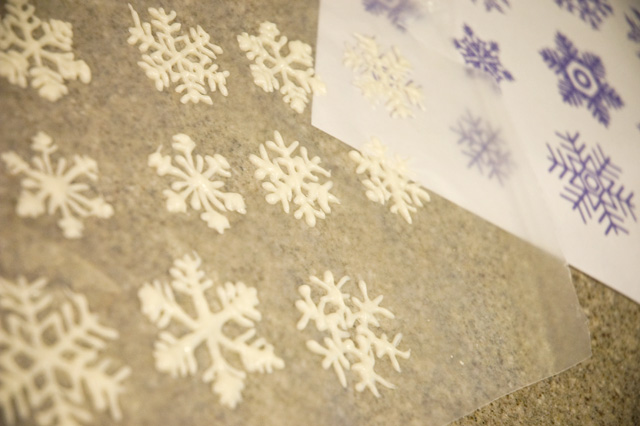 They take only a few minutes in the fridge to set completely, and although their incredible delicateness makes them easy to break, it also makes them beautiful. See how the snowflake totally distracts your eye from the globby frosting?

I baked my cookies in my mom’s silicone flower mold

to make them into thick flower-shaped cakes, but they look and taste great as drop cookies, too. For a no-hassle adaptation, you can take two drop cookies and sandwich frosting between them like a whoopie pie. Just freeze the dough for a little while before you bake the cookies so you can shape them neatly on the pan.

One of these flower-shaped cookie cakes, with a generous dollop of fluffy frosting and a dainty snowflake garnish, makes an ample, rich, comforting, salty-sweet treat you can eat with a fork and feel fancy about. But at its heart, you and I know it’s just a dressed-up version of an old favorite. 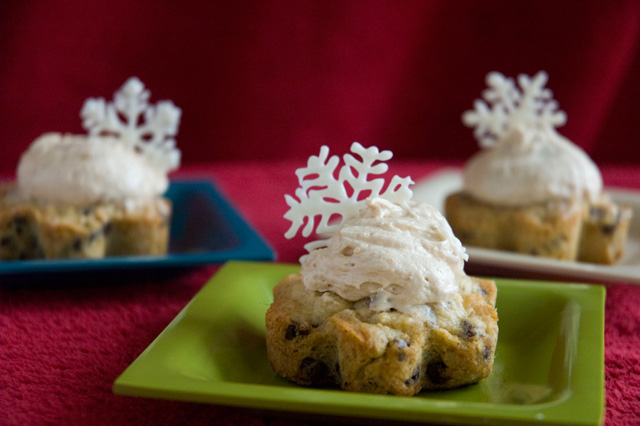 Soft Chocolate Chip Cookies (based on a recipe from Martha Stewart)