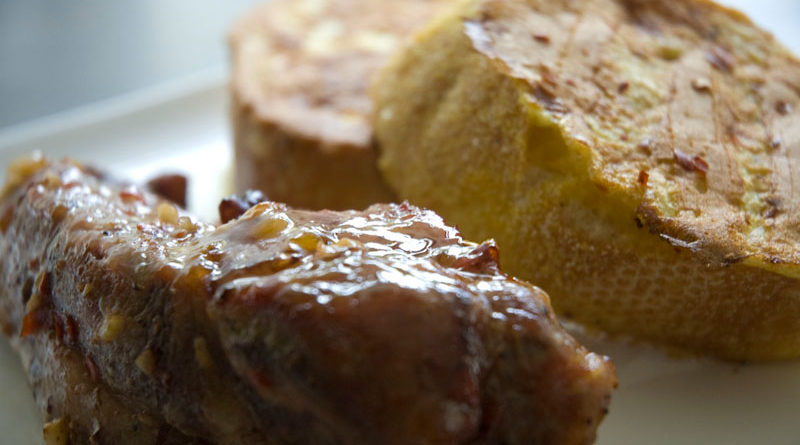 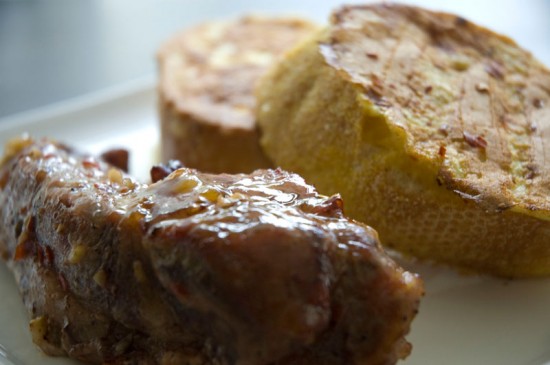 I took this assignment—”make up a recipe using dried chili peppers”—with one thing in mind: I’d finally have an excuse to teach myself about dried peppers. It seemed a perfect plan, because whenever I’m in Asian and Latin grocery stores, I admire their massive sacks of dried chilis and wonder what the hell they’re for. There’s so many. They’re so pretty. And I want to buy them. But I can’t because they’re too, too many and I don’t know what to do with them. What if I tried them and hated them? I’d be stuck with hundreds of peppers I hate! Which, in all honesty, doesn’t sound that dire now that I’m putting it into words. Just imagine it’s a big deal, because when I’m standing in the store, it seems like one to me.

So Marx Foods offered to send me a sampler of several different kinds of chili peppers in totally reasonable quantities and I couldn’t help but think I’d emerge from the process a better person, the new learned me, after the experiments are done and the Internet has taught me all it knows about chili peppers. I pictured myself dancing up and down the aisles of Super H Mart with my newfound dried chili pepper prowess, expertly tossing bag upon bag of beautiful deep red peppers into my shopping cart. Do you remember that part in A Christmas Story where Ralphie imagines his teacher reading his theme, and she flounces around in a dreamy stupor, writing “A+++++++++++++” across the chalkboard? That was kind of how my dried-pepper-buying fantasy went. That was me. Flouncing. But with peppers.

So I said yes. 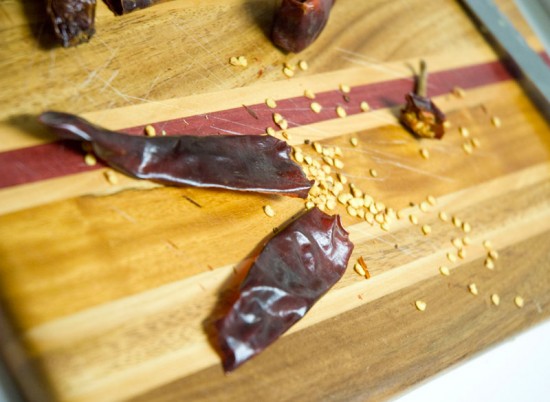 I did loads of Internet research on dried peppers, and I applied the sum of my knowledge to a handful of habaneros and puya peppers. “A good way to rehydrate peppers,” said the Internet, “is to place them in a bowl of warm water and wait. But if you really want them to be spectacularly rehydrated, so that your neighbors will come over and say, ‘My, what is that heavenly scent? Are you rehydrating peppers?’ then you should slice the dried peppers and roast them first, and then rehydrate them in a bowl. This is better for some reason. It probably makes them taste hotter or something.”

I’m paraphrasing. But that was basically what the Internet said.

Confident that I’d found the fussiest (and therefore surely the best) technique on the Internet for turning dry peppers into wetter peppers, I sliced the peppers, took out the seeds, arranged them very tidily on a sheet of foil, stuck them under the broiler, and set the oven on fire. 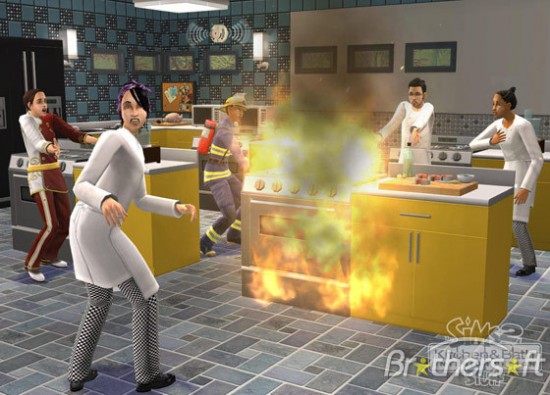 We used to play The Sims, and sometimes when you play The Sims, your Sims try to cook a dish that’s ahead of their culinary skill level (usually if, for instance, a Level Four cook starts making some fancy waffles and then wanders off to shower or complain about the furniture, and your Level Nothing cook tries to jump in and take over without ever having heard of a waffle). More often than not, the power of your Sim’s inexperience will set the entire range aflame. And that’s why, when you build a Sim a house, you always place the smoke detector directly above the stove.

Our smoke detector is in the hallway, which is slightly less convenient when you need to fan it with a potholder because a kitchen appliance has caught, and indeed is still on, fire.

Never again will I question the relevance or realism of The Sims. 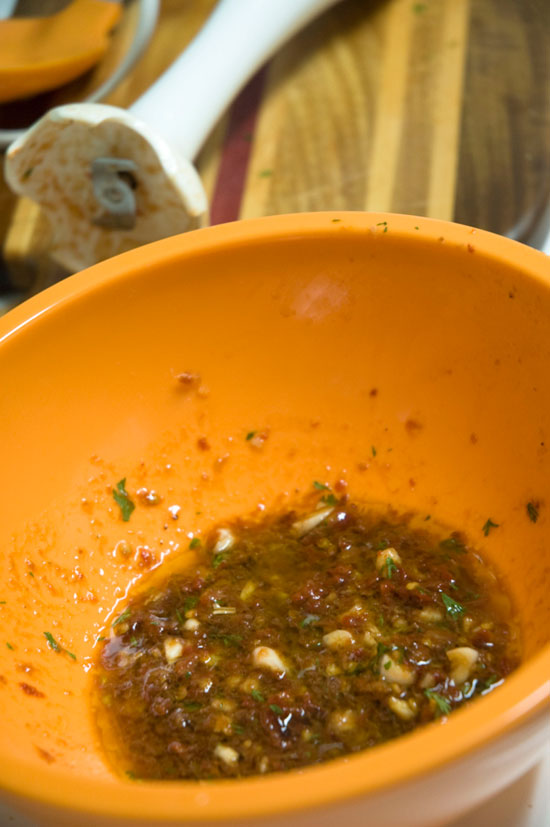 So I told the Internet to go lick itself and opted for a common sense approach: Rather than attempting the ultimate fanciest most flammable method I could find, I rehydrated the peppers the sensible way, chopped them up, and made them into a beautiful marinade for some pork shoulder “ribs.” (I have serious doubts about whether pigs have ribs in their shoulders, but now that I’ve sworn off Internet research, I have no idea how to find out for sure. I guess I could…ask my local butcher? Does anyone have his email address?)

To accompany my “ribs,” I put together a quietly glamorous savory French toast using a stale loaf of French bread, some eggs, and a few complementary seasonings, including one more dried chili pepper, crushed. I think if I did have an absurdly large quantity of dried peppers from the international grocery, a lot of them would end up crushed. I keep crushed red pepper in the spice rack as it is, but a dried pepper freshly crushed seems to have more flavor. Plus it makes me feel like I’ve done something and cooked with whole ingredients, even though I’ve actually just dipped a piece of bread in some egg and fried it in a pan. Level Four, here I come. 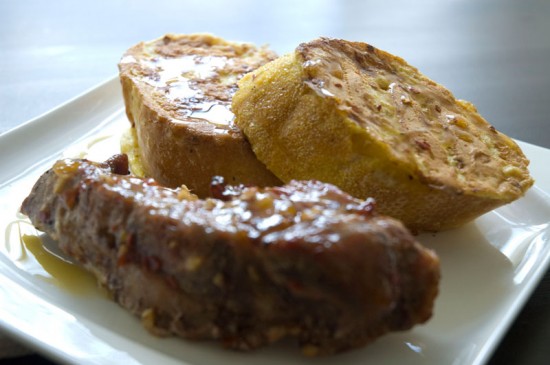 I might be done with sweet French toast after this, by the way, although I always liked it before. It’s just no match, in my opinion. This savory French toast tastes incredible, and it’s got an airy crispness on the outside and a creamy softness on the inside. Be careful not to overcook it, or you may lose the creaminess, and it will be only half as awesome. (Which is still very awesome.) 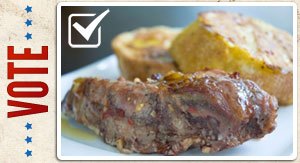 Recipe’s just below, but one last thing: This recipe, and the sampler of peppers that inspired it, are for a contest that Marx Foods is having. There is voting! Please vote for the recipe you think is best. And if you’re short on time, hey, you’ve already read this one! So you can vote for Knuckle Salad. Simple. Job done. 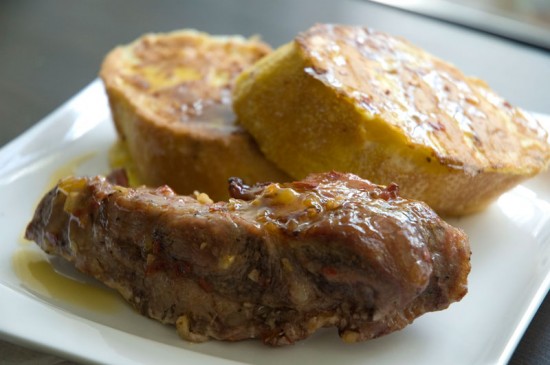 For the French toast:

Just once more before you go: Please vote for Knuckle Salad in the Marx Foods chili pepper recipe contest!