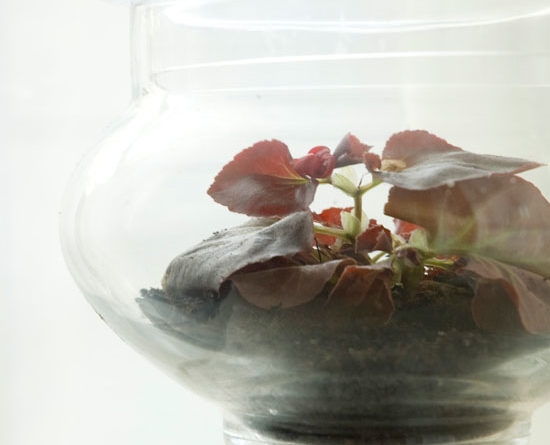 I bought two plants about a month ago. The begonia was named Roy and the moss was called Moss.

Devastatingly, Moss is no longer with us.

I’m not good at plants.

However, despite being forgotten in his sad little plastic pot, Roy seems to have stuck it out on the windowsill. What a damn survivor.

Any plant that can survive a month in my care deserves a fighting chance, so I moved Roy to a terrarium. I read somewhere that plants are harder to kill when they’re in terrariums, which I presume is because of the protection they offer from ranged weapons. I also read that begonias in particular thrive in terrariums.

I’m really not good at plants. I cannot put too fine a point on that.

So I looked up tons of instructions and I followed them as closely as I could. I didn’t try anything fancy. I didn’t add plastic animals or ships or a tiny computer desk to the terrarium. I did not combine multiple species of plants into a miniature landscape. All I did was put a plant in a jar.

According to Better Homes & Gardens and the elders of the Internet, this is how you make a terrarium.

I put a quarter inch of charcoal into the bottom of the jar (maybe more like half an inch) and couple of handfuls of gravel.

Then I added some soil and dug a well and stuck Roy’s roots in and pushed all the dirt back to the middle so he wouldn’t fall over.

Finally, I watered him a little. I think it was a little. Just a squirt. I don’t know how much is a lot to a begonia and he didn’t say when.

It’s been about an hour and I don’t think he’s dead yet.

Only after I finished did it occur to me that the thing plants probably like best, even more than the relative safety and confinement of a terrarium, is for me not to touch them. So I may have made a mistake.

But he looks so much nicer in the jar.

Basically, all I want is for Roy to live forever with minimal attention from me.

I’ve had a lot of plants, and despite my arduous research and attempts at remembering to water them, what usually happens at this point in the process is that the plant begins to shrivel up and die of natural causes (except that one time when that fern got moldy and I dumped it out in the yard, and that other time when I found tiny orange bugs all over my herbs so I dug them up and chucked them off the balcony). Knuckle Salad is certainly not a clinic for my plant problems. However, if you can see anything I have obviously done wrong (terrible jar? not enough sunlight? too many zombies?), maybe you could let me know in the comments. I will be very grateful.

If he survives, that is, I’ll be grateful. If he doesn’t, I’ll secretly blame you in my heart for the advice you provided/withheld. So let’s all hope for the best and I’ll check in later with updates.

*What? Don’t tell me you can see gravel without thinking of that rock-eating lady from My Strange Addiction. Come on!