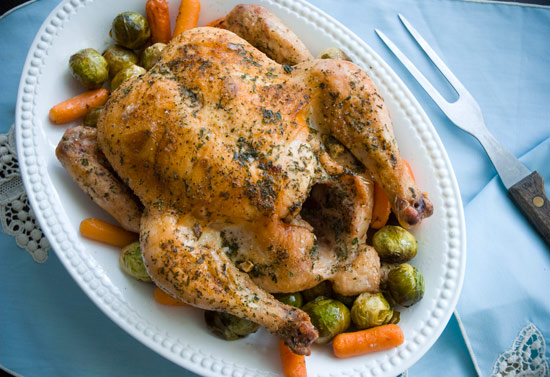 I used to think that if you were “tightening your belt,” it meant you were making a decision to be more frugal from now on. I thought that somehow, the act of belt-tightening signified how strict you intended to be about sacrificing luxuries, the minute discomfort around your waist acting as a constant reminder of your thrifty new lifestyle. For instance, if you saw a pair of shoes you liked, the tightness of your belt would snap you back to an awareness of your no-unnecessary-purchases policy, and you’d put the shoes back with your head held high. “Thanks, belt,” your wallet would whisper. And your belt would be like, “No sweat, Mr. Folderson!”

I’ve recently had two disappointing revelations: wallets don’t talk, and “tightening your belt” clearly means that you’ve been forced to make sacrifices already—namely, you’ve sacrificed the expense of food because you couldn’t afford to eat properly, so now you’re too skinny and you have to tighten your belt to make your pants stay on. Because you’re also too poor for new pants. I find this profoundly depressing, as figures of speech go, and preferred the talking wallet.

For the last year or so, John and I have been doing what I might once have classified it as tightening our belts. We decided to do this because we don’t ever want to have to do the thing it actually means. (For what it’s worth, I will probably never use that expression again. I don’t like how casual it is. It’s like slapping Tiny Tim in the face.) We’ve just been trying to get smart and save a little cash. That’s all.

In the process, we’ve developed all kinds of praiseworthy domestic habits, like eating in, packing lunches, and stretching leftovers. As it happens, the cornerstone of all these positive advances has been one delicious weekly chicken. You’d be amazed at everything you can do with just one chicken a week. 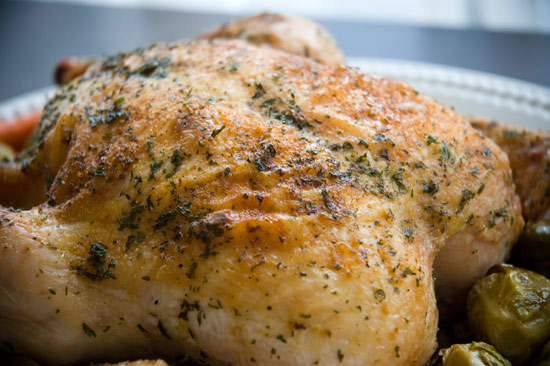 In fact, not only would you be amazed, but you will be amazed, because I’m going to tell you all about the weekly chicken—which, by the way, you’ve probably already noticed is an excellent name for a poultry- or cowardice-related newsletter, and you might as well forget about it because I’m calling dibs. Just in case I launch a newsletter one day. For cowards. Or poultry farmers. Or cowardly poultry farmers, who either fear poultry or raise poultry that fears everything.

So. The weekly chicken. It’s a big chicken and I roast it on Monday. That’s the easiest meal of the week. Apart from unwrapping and washing the chicken (a task in exchange for which I’m convinced I should be exempt from literally all the other household chores, because washing a chicken is probably as gross as cleaning the toilets AND throwing out the oozy leftovers from the back of the fridge), the oven does most of the work.

I’ve had so much chicken-roasting practice, I could do it with my eyes closed. The only reason I don’t is because I am prone to kitchen accidents as it is and John has told me he prefers it when I don’t burn myself on the oven and scream about it.

Instead, I’m going to take all my chicken practice, and I’m going to run it all down for you. If you’re uncertain about chicken-roasting, you may find this educational. And if you’re perfectly certain about chicken-roasting, you can compare my method to yours! Then you can scoff at the parts that I do differently, and feel all kinds of superior! I mean, not that that’s the sort of thing I would do.

(But then I remember for later.)

(And I try the new way and if it’s better than my way I pretend that’s the way I’ve always done it. Zero conscience.) 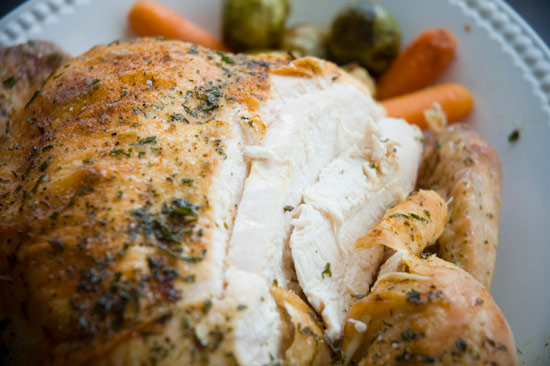 So! Here’s how I roast a chicken, and always have since the dawn of time and I didn’t get any ideas from anybody*:

I don’t know if you noticed, but a lot of those steps were optional. There are plenty of Mondays when all I do is rinse and dry the chicken, season it, and drop it in the oven. DONE. But I like having an arsenal of little tricks to make it different from week to week. 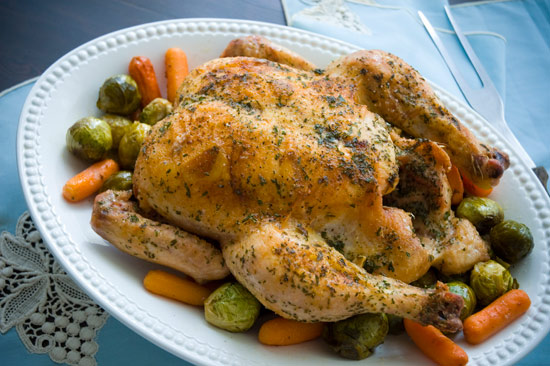 So that’s how I make dinner, every week, mostly from the couch. After dinner, John strips the remaining meat from the bones and seals it in a plastic container. He makes sandwiches for the entire rest of the week, and I make stock with the bones and vegetable scraps. The stock only needs some extra veggies and rice to become soup for another weeknight, because chickens are goddamn magic.

Mmm, soup. Now I want to tell you about stock (edit: shortly after this post was published, I did). But I think that’s enough chicken discussion for one day. You go roast something and I’ll talk to you later.

*A lie. Obviously. I get lots of ideas from everywhere, all the time, including friends and relatives and passing comments from strangers. For instance, if you’re the person who uttered the phrase “dry brine” at that bar that time, or something completely different that I could’ve sworn sounded like “dry brine,” thank you! It was you who prompted me to read every article I could find on the subject of brining and dry brining—which isn’t technically brining—and then encourage the Internet, including you again, to try it. Unfortunately, that encouragement is also your reward. There will be no royalties. Um, thanks again.