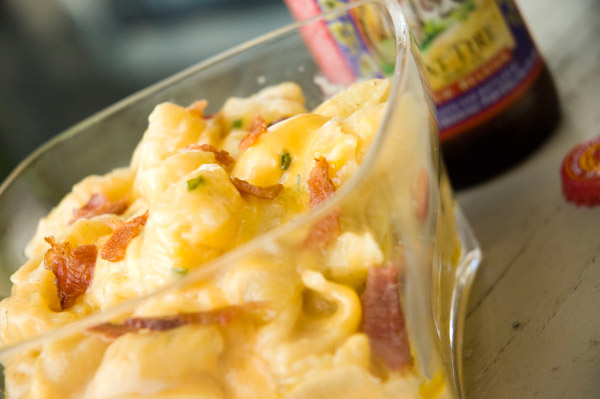 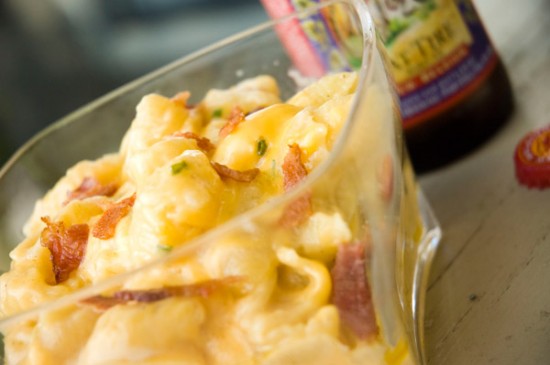 Why is this called “Last Meal?” Oh, because it’ll kill you. I mean, maybe. Probably. It’s got everything you love right in one bowl, and it’s going to love you right back. Hard.

Dish up a plateful and you’ll see what I mean. It’s hard to say whether it’s the butter, the flour, the cream, the cheese, the beer, the macaroni, or the bacon, but this almost-too-comforting comfort food will launch you face-first into a happy, lazy sofa-coma. Write a heartfelt letter to your loved ones before dinner (just in case) and you won’t regret a thing. 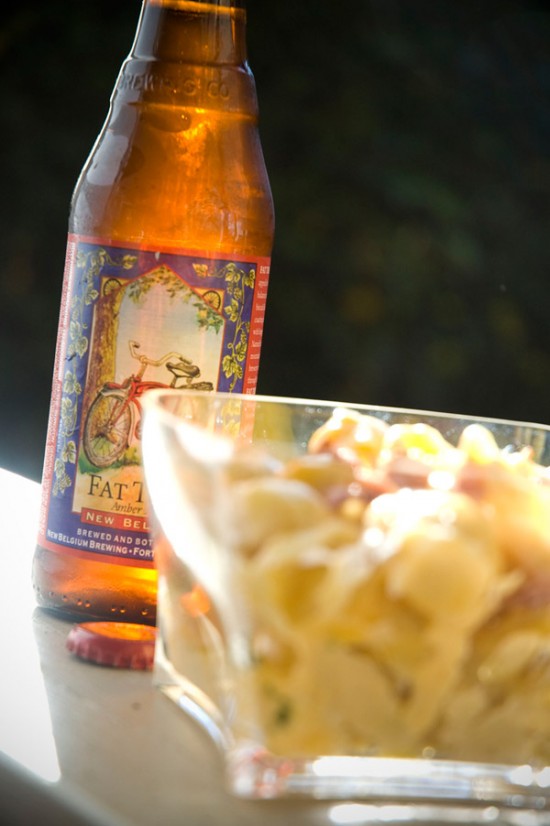 To make the best-worst-possible macaroni and cheese, obviously you’re going to need bacon. And you’ll need American cheese. It may not be regarded as a particularly respectable food, but there’s nothing—nothing!—like processed cheese when it comes to making a cheese sauce smooth and creamy.

You’ll also need beer, of course. I prefer to cook with beer I like to drink because I expect to taste it in the dish. Otherwise, why bother? I’m not pouring all this beer in here for my health, am I right?

Anyway, a year or two ago, John and I found a local restaurant chain that offers points for each new beer you try. We’re such suckers for a good point system that we’ve accidentally learned quite a lot about beer, and these days we usually keep some good beer in the fridge. On Mac and Cheese and Back to the Future Night, as it would come to be known (for probably-obvious reasons, although if you guessed it’s because we watched Back to the Future, you’ve underestimated the likelihood that we might have a card game based on Back to the Future) we had Fat Tire on hand. Hooray!

Now, you can use any decent amber ale for this, though I’m stubbornly partial to Fat Tire, and to New Belgium in general. I don’t mean to ramble, but New Belgium was the first craft brewery I really became aware of, back when they started distributing here two or three years ago. Maybe it’s the same principle at work that prevents you from forgetting your first Doctor, according to a cool t-shirt I saw one time. Or your first pig, according to a bumper sticker that’s been on my car for nine years, though I’ve never really understood what it meant. (Or your first love, according to what is apparently the actual figure of speech that both those jokes are based on.) But then again, it could also be because New Belgium is a brewery widely recognized for its excellent beers. Who knows?

Whatever brewery you choose, I wouldn’t stray terribly far from the amber ale category in this recipe if I were you, because it turned out lovely. You’ll get a complex, cheesy, creamy, yeasty mac and cheese studded with chives and crunchy-chewy salty-sweet bacon, just like the perfect loaded baked potato, but without all that way-too-nutritious potato in the way. 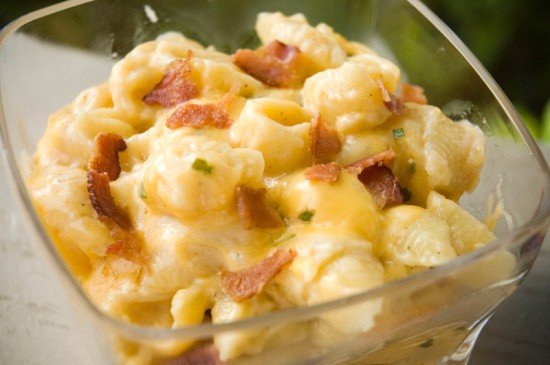 [/recipe] Note: As part of the Foodbuzz Tastemaker Program, I received sponsorship from New Belgium for publishing this recipe. This was an honor almost comparable to what I imagine it would’ve been like if Eleventh Doctor Matt Smith had asked me to concoct a menu for his Doctor Who theme party, or if… hmm, no, I don’t know how to tie it into the pig thing, because I’ve never actually owned a pig. I still don’t get that.