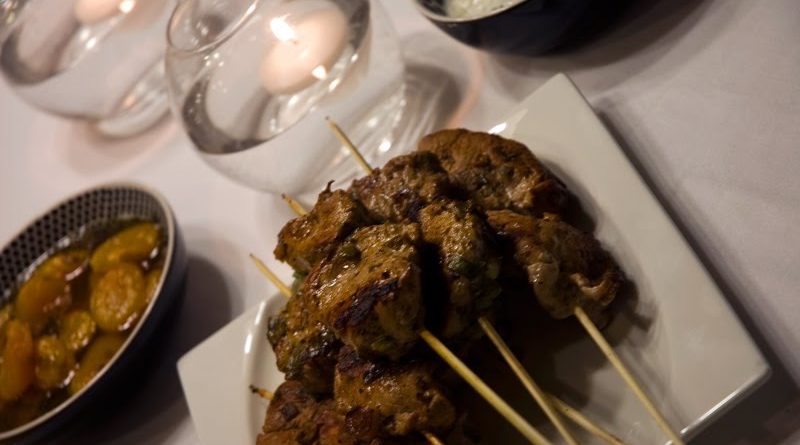 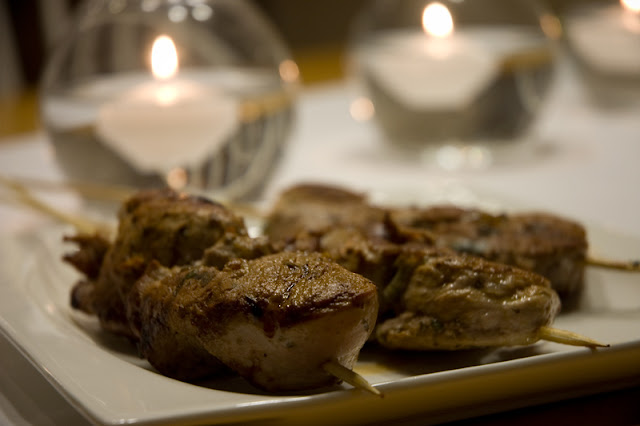 Last weekend, I went to the Marietta Diner. Yes! The Marietta Diner! The one with the giant sandwiches, incredible pies, generous portions, and crazy-authentic Greek cooking! So guess what I ordered?

Two fried eggs and a bowl of fruit.

It was late, dude. I was not hungry.

Naturally, I regretted my decision immediately, and felt even more remorseful in the morning, as I thought of all the delicious spanikopita and feta-laden pitas I could’ve had. And pies! Oh, the pies… why didn’t I at least have them wrap one up to take home with me?

So here’s what I did. I went back to a magazine I remembered seeing a pork souvlaki recipe in. I hunted down instructions for tzatziki in Amy Sedaris’s cookbook, I Like You. And I made those things. And I ate them. And lo, they were delicious. And I considered this my absolution.

Amy Sedaris’s tzatziki is easier than the one I’d tried previously and failed at. You just peel, chop and salt a cucumber, press it in the fridge until all the liquid comes out, and mix it up with Greek yogurt, garlic, lemon juice and dill. It was easy and authentic, like everything else I’ve tried from that book, although probably any trustworthy tzatziki recipe will do.

The recipe for the souvlaki and apricots is online at FoodNetwork.com. I didn’t change anything. No, that’s not true. I used scallions instead of shallots (they never have shallots at the grocery store by me, what’s that all about man) and I skipped the pine nuts. Everything else, I did just as the recipe ordered, and it was wonderful. So, um… I guess I’m really just bragging, since I haven’t got a single recipe to actually post for you.

Well, bragging and offering my advice. 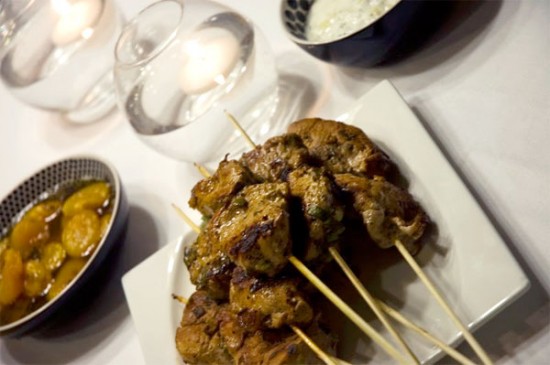 Oh, here’s a little more advice. In the same issue of Food Network Magazine, there’s a recipe for avocado pie. I took that to be a sign that I was supposed to also make a pie to further repent for the pie I didn’t have the night before.

My advice to you on this is complex, but boils down to this: Steer clear unless you (a) know what you’re doing with an avocado, (b) have tried avocado pie before and know what it should be like, or (c) love desserts that taste a whole lot like a can of condensed milk. I believe avocado pie can be delicious, but that belief is purely held on faith. My avocado pie, for which I’m pretty sure I followed the recipe to the letter, was not delicious. Take that as you will.

At any rate, between shopping, cooking, and baking, I spent a lot of my Sunday in the kitchen. It would’ve certainly been easier to just order what I wanted at the Diner. But after all was said and done, I ended up with a pork souvlaki recipe that’s easy and delicious and that I will certainly make again, maybe sans apricots, because as delicious as they are the flavor is so tart and powerful that it seems impossible to eat one without making the tequila-shot face. Maybe they could be toned down. There, a little bonus piece of advice for you—tone down your apricots. Don’t say I never gave you anything.