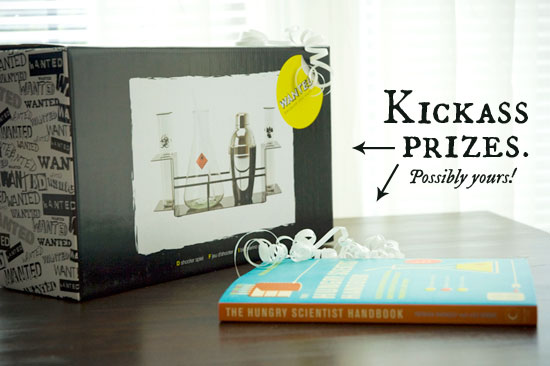 I was thinking, everybody. I was thinking about you. Not in a weird way or anything. It’s just that you’ve been such an excellent audience so far. Isn’t it time I got you something in return?

What do you like? I wondered. You like eating and drinking, probably. Yeah, pretty sure. And you seem to like dorky-type nerd things (such as me and my goofy-ass tales of failure and geekery… oh, and those sci-fi and video game boozes). You’re also flipping brilliant and you have excellent taste in borderline-kitsch awesomeness. I know that from reading your comments and watching you on Pinterest. I mean, uh, some of you. I mean… I mean, I haven’t been watching you—that came out wrong—but I, you know, I… I see you around.

So I picked you out some stuff.

I mentioned to ThinkGeek, casually over brunch (probably), that I was thinking about doing a giveaway and that I was inspired by their catalog because their inventory pretty perfectly serves the audience I imagine Knuckle Salad has. (I say “imagine” because there’s no analytics gauge for how awesomely geeky or into rad stuff you guys are, but I get the sense.)

Then ThinkGeek offered to provide a prize of my choice, and I said, hooray! I told them I would like to give you either the amazing chem-set barware or the neato book about sciencing up food. And ThinkGeek said: HAVE BOTH!

So now we, as a community, HAVE BOTH! But like the class hermit crab, these things can be in only one place at a time, so someone has to be in charge of taking them home and caring for them. And by following the instructions I’ve made up below, you can win the chance to be the caretaker of one of these prizes! Except instead of just having it for the weekend and watching it totally not even eat the lettuce you gave it so what is the point of even having this thing, you get to keep it and it doesn’t poop.

The two prizes up for grabs are a Chemistry Cocktail Set and a copy of The Hungry Scientist Handbook.

You’ll be entered into two random drawings. The person chosen in the first drawing will receive their first choice of prize; the person chosen in the second drawing will receive the remaining item, as long as it’s either their first or second choice. Both of these items are incredibly awesome (I may or may not have flipped through the entire Hungry Scientist Handbook while preparing this contest, but if I did, I was very careful not to let it show on the cover or spine), though the cash value of the barware is higher.

To enter, you must do at least one of the following:

If you do both of the above steps, you’ll get two entries into the contest, which doubles the odds that you’ll win!

And if you really want to win, you can also receive one extra entry for each of the following:

This contest will close on Sunday, October 2nd, at 6 p.m. EST. The winner will be drawn and announced the following day, Monday, October 3rd, 2011. Due to overseas freight costs, this contest is open only to those residing in the continental U.S. (unless you don’t mind paying your own shipping).

TL;DR: Maximum number of entries is four: post a comment with your prize preference, fill a form out on Facebook, tweet-n-comment, and/or follow-n-comment. Two winners, and first place gets his or her first choice of prize.

This contest has now ended. Winners will be announced Monday. Thank you for participating, and be sure to enter the next one!