The July 2010 Daring Bakers’ challenge was hosted by Sunita of Sunita’s world – life and food. Sunita challenged everyone to make an ice-cream filled Swiss roll that’s then used to make a bombe with hot fudge. Her recipe is based on an ice cream cake recipe from Taste of Home. 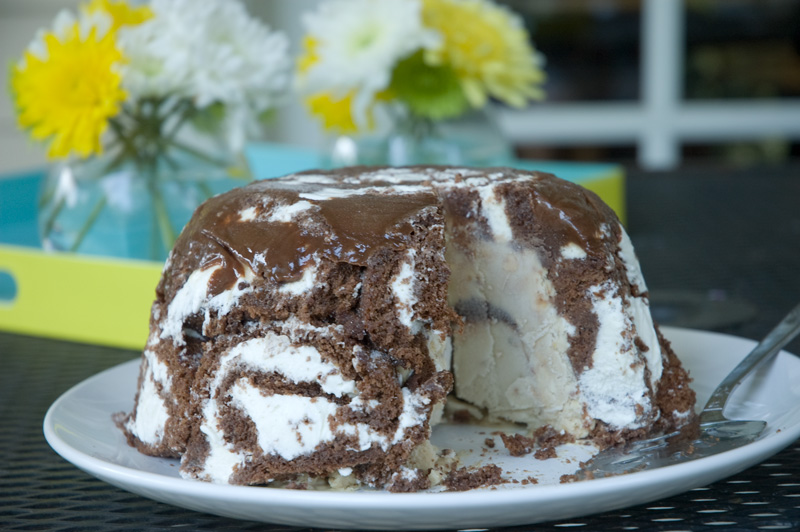 The other day, I went roller skating with some friends at a roller rink. It was called Sparkles and it had laser tag in the back and free pizza and soda for everyone with skates on, so no, if you were about to ask if it was some kind of cool 2010 roller rink full of athletic hipsters, it was not. No, just weirdos and middle schoolers, the way you remember.

It was pretty deserted.

It was fun, though. Turns out it’s easier to stay on your feet when there aren’t a bunch of zippy little kids weaving all around you at 30mph. Anyway, now I can’t remember why I started telling that story, so, uh… hey! Speaking of things that go around and around in circles, check out this ice cream cake thing covered in Swiss rolls!

Yep. Pretty much nailed that segue. 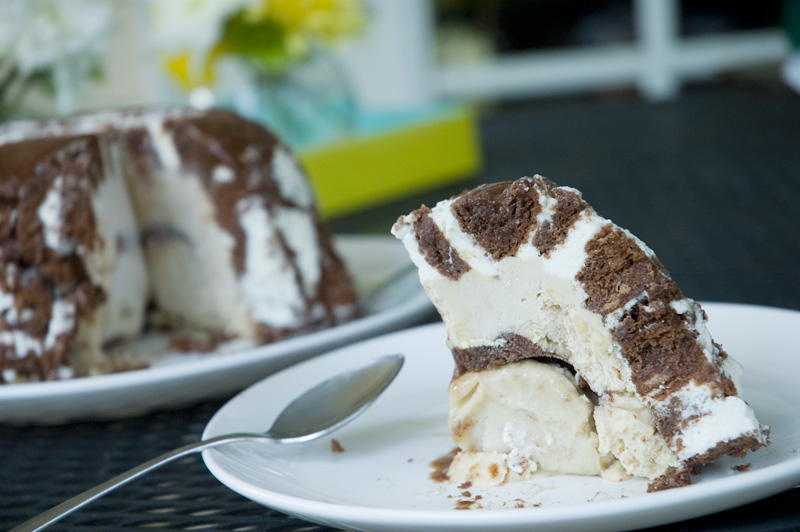 Here’s what happened. Last month, I found out about something called The Daring Kitchen, a community of people who tackle one intimidating recipe per month and then share photos and war stories. To make it more intense, they dump you if you chicken out more than four times a year. I seem to be drawn to things I can get kicked out of, so I had to apply, and this is the first recipe I was given by the Daring Bakers: a bombe with two layers of ice cream separated by chocolate sauce, covered in slices of Swiss roll.

So fancy! So delicate!

Of course, I messed mine all up. My cake rolls broke in a thousand places (so I smooshed them back together and used them anyway) and my chocolate sauce leaked out so most of it is on top of the cake instead of in the middle where it belongs. The “it may not look like much but it sure is tasty” philosophy doesn’t really apply when half the purpose of the project is to take beautiful photos, but please try to imagine the deliciousness of it into the picture. It makes the colors brighter.

Imagining will be easier once I tell you what it is! So first we’ve got chocolate sponge cake, a recipe that Sunita (the host of the challenge) provided, which is light and squishy and freezes nicely and thaws back into a very soft and fluffy cake.

That cake is rolled up with banana-infused whipped cream, which is just like regular whipped cream except I froze a banana, thawed it out, and added the liquid that was released to the whipped cream.

Then the top layer of ice cream is peanut-peanut butter frozen custard.

The chocolate sauce is one that also came from Sunita, and couldn’t have been simpler.

The bottom layer of ice cream isn’t ice cream at all, but rather frozen abused bananas.

Peanut butter, bananas, chocolate, ice cream and cake are pretty good together. (I can hear the gasps of outrage rippling across the Internet. Peanut butter! And chocolate?!) And although my little bombe won’t make it onto the cover of any magazines, I loved working on the recipe. I never would’ve tried something this complicated without encouragement, and now I feel like I could do it again if I wanted to, only better. I think this Daring Bakers thing is going to work out.

Basic assembly (from Taste of Home)