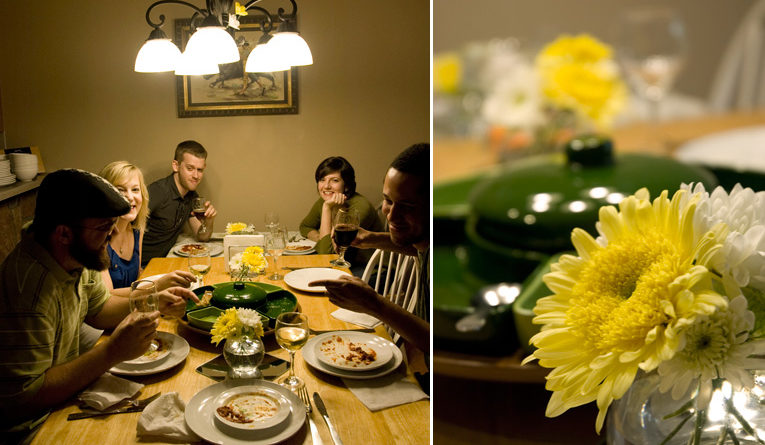 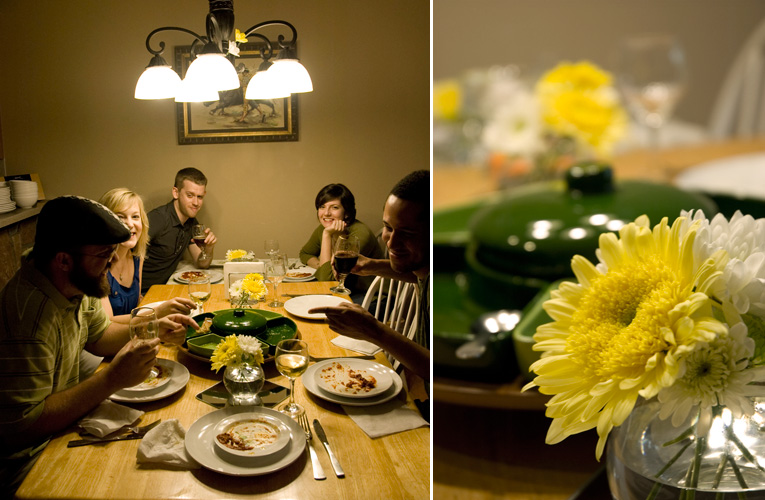 Before last Saturday, I’d never had a dinner party. Sure, I’ve had people over for dinner… even five or six at a time… but I’ve never said, “I’d like you to come to my dinner party on Saturday.” I’ve maybe said, “Come on over Saturday for dinner.” A dinner party is a whole other thing. People have to comb their hair and be on time and wonder who’s gonna be sitting next to them. All the dishes match and there’s usually a special playlist involved. I’ve never had that kind of dinner party.

But I’ve never had a food blog before, either, or a blog sponsor, and all of this seems to go hand in hand. Foodbuzz (the sponsor) asked me if I wanted to host a dinner party and blog about it as part of the launch of Buitoni’s Frozen Meals for Two. I said yes, I did want to do that. So they gave me a bunch of pasta and I called some friends and I said, “Are you free on Saturday? I’d like you to come to my dinner party!” And then I made a playlist.

I also tried to set my table very deliberately, like I had put a lot of thought into it — like a “tablescape” — because I watched like four years of Christopher Lowell in high school and have never once had occasion to use all this accumulated knowledge about fancying up a dinner table. Unfortunately, I found that I wasn’t interested in piling up books under a tablecloth for height variation or bringing in twigs and pine cones from the yard for texture, and I don’t even own a napkin ring, so I pretty much just put out some plates and stuck flowers in a vase.

As everyone arrived, I made them sit around and drink wine and munch on Italian bread with fresh herb butter, like people at dinner parties do on television. I copped out on the bread, though. I thought I’d be able to take a labor-intensive bread recipe and outsmart it by letting the bread machine make the dough and then just shaping it into loaves and baking it, but I was wrong and I ended up with two weird, flat, floppy dough logs. Good thing I had Jenny and Publix to save the day.

The butter was homemade, though. So still fancy.

After an experimental appetizer of Italian eggs rolls (recipe here!), it was finally time to sit down and greet the pasta of the hour.

I made two varieties: Shrimp and Lobster Ravioli with Garlic Butter Sauce, which are filled with a surprisingly generous amount of seafood, and Four Cheese Spinach Ravioli with Tomato Basil Sauce. I wanted the former to take center stage, but I thought it would be fun to sample two different kinds.

Since there were seven of us, and each box is supposed to feed two, I made four boxes. Maybe it was the bread, or the appetizers, or the wine of which I know I started with eight bottles but eventually lost count… but whatever the reason, we definitely couldn’t finish all the ravioli. I probably could’ve made just three boxes, but it’s better to have too much food than not enough, right? (Unless you have to carry it, I guess, so hikers and soldiers might not agree. But I bet they don’t give a hang about frozen ravioli anyway.) 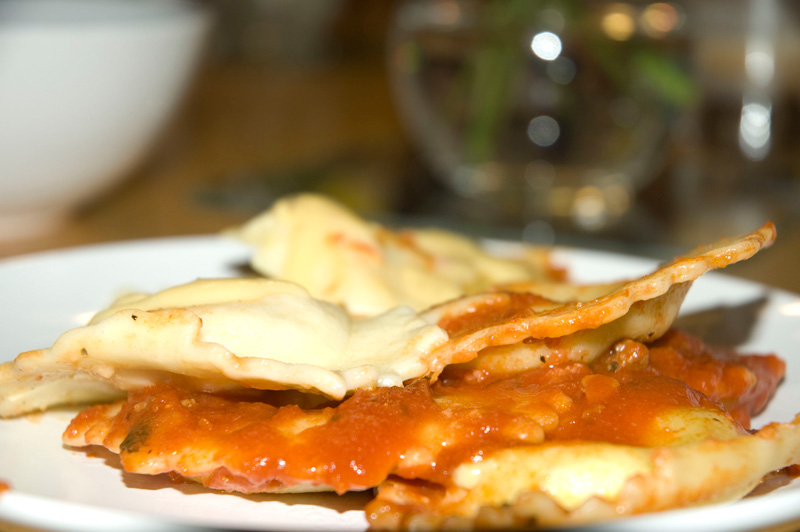 These things are enormous. I tried both kinds at once so I wouldn’t miss anything, and they were both very tasty. That’s the shrimp and lobster with garlic butter on the left, and the spinach-cheese with the tomato sauce on the right. I wish I had been able to get a decent picture of the fillings, but listen, it’s hard to photograph food indoors at night. And remember what I said about the wine?

Now, bear in mind that Buitoni kindly supplied the entree for this party, so I’m going to get serious for a minute. Preparation-wise, the ravioli was about as painless as I can imagine a dinner for seven could possibly be. I might’ve said it was a little pricey for pasta (at $8.99 and $9.99 a box, we’re talking close to $40), but then again, the protein and vegetables and sauce are all included. So it might still be on the frugal end of dinner party fare. (That’s assuming cereal is not a viable entree. The jury is still out as far as I’m concerned.)

Now, if you want my honest opinion, frozen ravioli isn’t a revelation. My guests didn’t wonder where I found the time to make fresh pasta. But what gives this Buitoni version an edge over other frozen/refrigerated stuffed pastas I’ve bought is the ingredients. Every single thing listed on the box is food, and food with names that I recognize, too, like “cream” and “lobster.” Knowing what I’m eating has been a big part of my motivation to do more cooking, so Buitoni gets points from me for coming up with something I can throw together on the quick, enjoy, and still feel okay about.

Plus the sauces aren’t bad, and they come in a pouch that you boil right along with the pasta, which saves a pot. I like having something that easy on hand for when I come home late from knitting night, so I might get these again to keep on reserve. I can’t wait until technology catches up and lets me buy a boil-in-bag turkey dinner for after knitting night. Or a nice burger and fries. Sure, it sounds gross, but leave it to science! After all, there was a time when people would’ve said powdered cheese sounded gross, and now… well, I don’t know. Some people like it, I think.

To go with the pasta, I made wilted spinach salad with warm bacon vinaigrette dressing. I prepared the salad from start to finish while John made the ravioli, so dinner was entirely ready in well under 15 minutes. Spending so little time in the kitchen freed me up to mingle and skip around on my iPod until I had completely forgotten I ever made a playlist, which I think is probably what Donna Reed dreamed of doing in the ’50s, but she never got to go near her iPod because she was too busy checking on the roast the whole time. I wonder if people in the ’50s ever got tired of eating “the roast” every time a special occasion or a Sunday rolled around.

Here’s the salad recipe. It pairs especially well with the seafood ravioli, because the garlic butter sauce is very, very rich and the salad dressing is very, very zingy. The whole thing was a hit, as you can see by the above photo of Jenny, who had not even tried the salad yet and clearly already knew she loved it. 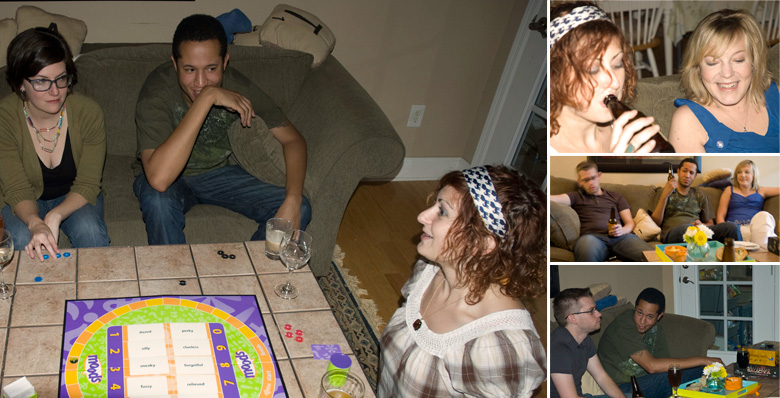 After dinner, we played a few rounds of Hoopla and Moods and Quelf. We tried to set up Zack’s Battlestar Galactica game (I was going to be Helo, out of pity), but even the setup started to get too complicated to follow, so we put it away to try another time. We played games for hours and wondered when we’d be hungry for dessert.

I thought I was clever, making dinner family-style, but I put out way too much food and we ate all of it, just like people are always afraid their dogs will do if they leave food out while they’re on vacation. In the end, we had to skip dessert, even though it was going to be this delicious ice cream cake.

So! In conclusion, my first real dinner party (with combed hair and food on matching plates and — ugh, no, the hair wasn’t on the plates! stop, that’s so gross) was a success. I think. I’d like to thank all my guests for letting me experiment on them yet again. Thanks also to Foodbuzz and Buitoni for commissioning this shindig. I had fun, and I think your ravioli enjoyed itself as well.