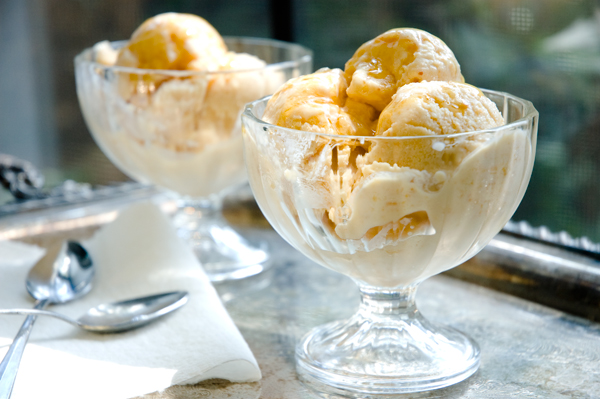 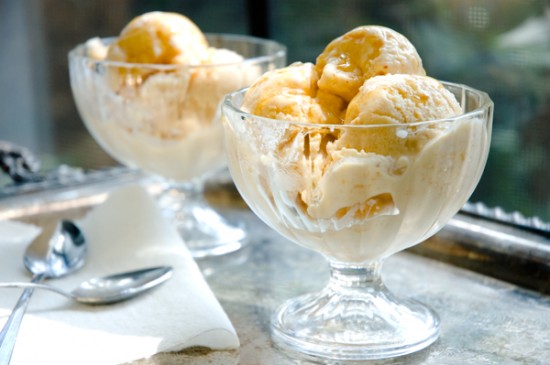 I got fresh apricots and fragrant nectarines from the corner grocer, plopped some yogurt in a bowl, and rubbed my palms together in a devilish manner as I hunched by the freezer and waited for it to solidify. (Which actually took several hours. So I did in fact take a short break from my diabolical cackling to read for a while and have a bit of a nap, but mostly there was a lot of the palm-rubbing I mentioned and sinister yogurt-related muttering. Very menacing overall.)

The next morning (yeah, I probably shouldn’t have called it a nap), I plunked my massive slab of frozen-solid yogurt down and gamely went at it with the cleaver. It was then that I learned that cutting a frozen slab of yogurt into chunks was a lot more difficult than I had anticipated.

The good news is that the longer I tried, the softer the slab got. The bad news is that it got softer because it was now melting all over my cutting board and counter and down onto my feet—bare feet that indicated for all the world that I was expecting a casual jaunt into the kitchen, not a race against the clock complete with frantic intermittent floor-mopping. The slab slid hither and thither as I tried to steady it, and I sort of sawed lamely at it with my other hand until I had coaxed it into a few irregular chunks the size of my fist.

I tossed my fresh fruit and some yogurt hunks into the food processor and started the motor, satisfied that in spite of this slippery yogurt-covered speedbump, I was now on the open road to frozen yogurt heaven. I hummed a merry tune as I sopped up the melted yogurt, ready to put this epic mess behind me.

No sooner had I devised a cleanup strategy (start at the outer edges of the devastation and work my way inward to prevent even stickier feet) than the ga-junk, ga-junk, ga-junk of the food processor suddenly quieted and I looked up to see hunks of melty yogurt spinning wildly above the blade, while the fresh fruit, now pureed into a loose goo, undulated at the bottom of the bowl. Nothing was blending. Nothing.

The food processor must have been too full. I removed all but one hunk of yogurt and started it up again. Still the lone yo-hunk zipped around and around the top of the bowl like one of those tiny little airplanes on a wire, which I had always suspected couldn’t possibly be a fun toy and now I felt fully qualified to judge. So I scooped it back out, softer and slimier than before, and I cleft it in twain with my sticky cleaver. The smaller pieces, now all but melted,  finally blended in the machine.

In the course of ten hours, I had taken yogurt, frozen it solid, and melted it again. I needn’t have troubled the food processor.

As it seemed to be my only remaining option, I chopped all the big hunks into smaller hunks and food-processed them until I had a big bowl of chilled apricot-nectarine yogurt. It was of a markedly thinner consistency than the plain unfrozen yogurt I’d started with. At best, you could dip a cone into the bowl and slurp the yogurt out if you stood over the sink, but it was hardly a bright summery treat.

In the end, I applied a method I had used before, one that I knew would work for me: I returned the sludge to the freezer and froze it solid, stirring frequently, until it reached the consistency of ice cream.

Although I was disappointed that I had somehow failed at what was essentially supposed to be a new fast cheater-method of frozen-yogurt-preparation, I ended up with exactly the frozen yogurt I had set out to make, apart from the missing chunks of lovely fresh fruit. The sloppy ordeal was really just a side note. In fact, I’m glad it happened, because I might not have gotten around to making any frozen yogurt at all if the dangling carrot of the new cheater-method hadn’t renewed my interest in frozen treats. And I mean, hey, the kitchen got mopped.

Note: I very much like An Edible Mosaic and I certainly don’t blame blogger Faith for my failure at the clever fast cheat recipe. On the contrary, you should see what a disaster I can be in the kitchen when I set my mind to it—or rather, when I don’t. (If you need proof, check out what I did to this custard and this soup.) But whether you use the clever fast cheat method or the foolproof backup method (described below), the apricot-nectarine frozen yogurt will be bright, crisp, and sweet with a tart bite, making it perfect on hot and humid summer days when rich, sugary ice cream seems too much. It tastes of yogurt, definitely—it won’t fool anyone—but there’s a bright side to that as well: it’s good for breakfast, with some granola on top.