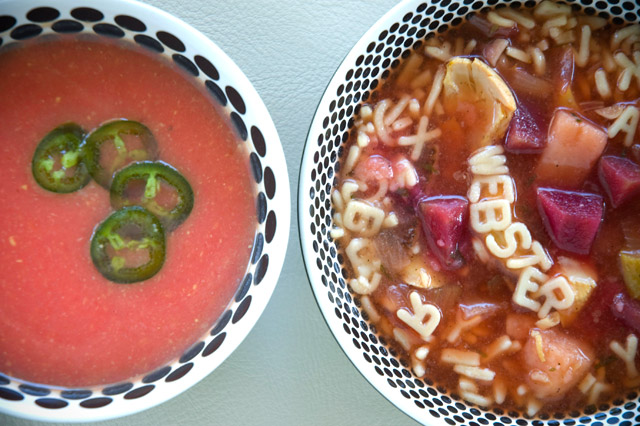 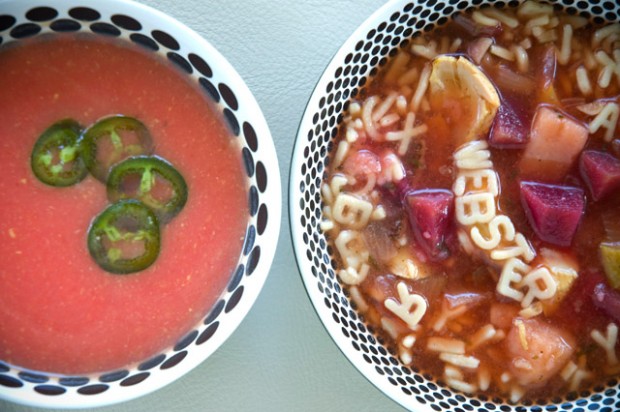 This post may seem a little peculiar, but because of Project Food Blog, it’s going to serve as a lot of people’s first introduction to me and Knuckle Salad. So I’m infusing it with an extra lot of me-ness for my new visitors. (Hello.) Lately I’ve enjoyed getting creative—you know, with the illustrations and everything—and today I’m expanding the effort by posting two soup recipes based on a story. A story I wrote. It’s not remotely famous or anything. In fact, it’s never been published. It’s just some story I wrote one time. About reading.

And because of it, you’re getting recipes. For soup.

That’s the sort of thing we do around here. Ready? Get comfortable.

First, I’m going to show you the story, because it’s short—just 125 words—and it would be strange if I didn’t. “Enjoy these recipes, inspired by a story! What? No, you can’t read it! Stop trying to pry into my private stories with your hideous filthy eyeballs!”

The boy’s father ordered him a cup of VichySeuss, and himself a big bowl of Webster Stew with extra pages for dipping.

As he savored the rhyming flavor of his supper, the boy recalled a time when he enjoyed mere alphabet soup, its letters dancing with robust character. He suspected they’d changed the recipe; he now found it pitifully bland. But VichySeuss, with its clever leeks and cheeky onions, was to his mind the most rewarding flavor experience known to man.

It was upon the soup’s dainty couplets that the boy reflected as his father, with uncharacteristic clumsiness, bumped the table soundly and sent his bowl tumbling. In that instant, the boy marveled at the words that flowed downward, sticking in the crevices of his father’s trousers. Was every word in the English language presently displayed there? he wondered.

The particular word his father exclaimed, however, was wholly unaccounted for.

So that’s that. I wrote it a few years ago and have since felt fond of it. This week, I thought of it for the first time in a while and decided to make it a kitchen project: two soups, one cold, one hot, same base ingredients, different seasonings.

VichySeuss was up first. Although I hadn’t yet worked out the method, my goal was simple enough: Make it yummy and bright pink (the way a cat ring makes everything look) and find a way to incorporate some kind of truffula tree. Something you could serve at, say, some kind of Dr. Seuss-themed baby shower. People do those, right? 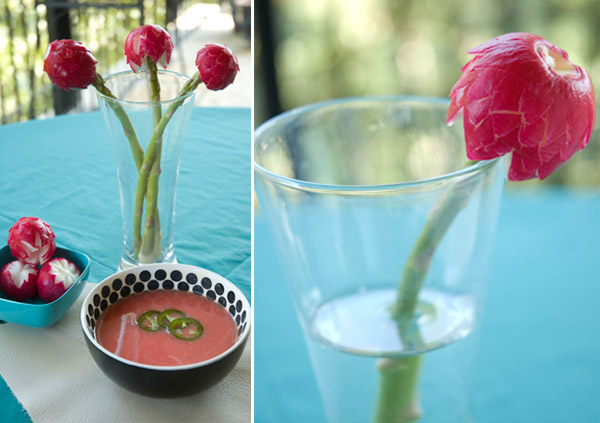 The truffula trees were easy. I just carved each radish into a chrysanthemum like this, gouged a hole in the center and stuck it on top of a raw asparagus spear. It looks cute and both veggies taste nice raw, so you can dip them in the soup (or a dip, I suppose) and snack it on up. Go nuts! It’s only vegetables! 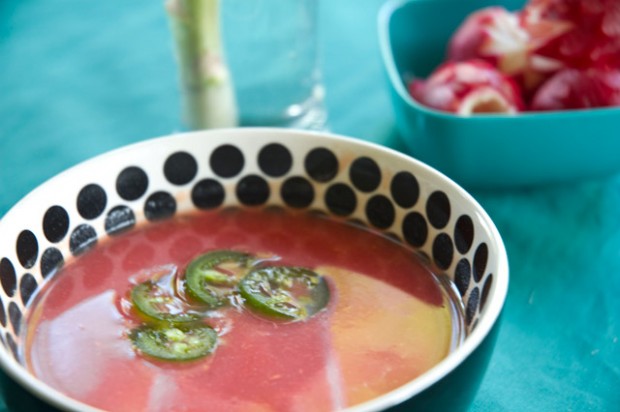 The soup itself was a big experiment that wandered a bit but ended up somewhere good. Vichyssoise is traditionally made with leeks, onions, potatoes and sometimes cream, which wasn’t quite what I wanted, so I 86ed the leeks (I know, totally compromises the soup’s relationship to the story, but I like it better and I can change the story if I want) and added corn and beets. Corn and beets are awesome. So yeah, maybe VichySeuss is about as much a vichyssoise as The Onion is an onion, but it’s Seussier than vichyssoise and has its own interesting, silky flavor.

As the beets cook, the color will begin to fade (where does it go? I have no idea!), so if you see your soup starting to turn orange, it’s done.

So there’s your VichySeuss, sans the clever leeks. It’s sweet and refreshing but perhaps a bit sophisticated for the Cat in the Hat crowd. I’m not sure. I think the corn makes the flavor pretty approachable, like a nice corn chowder, and it’s a funny color which I hear kids like. I just can’t say for sure whether that’s enough, if you’re cooking for a kid. I used to be exactly the kind of kid you’re probably trying to fool and I can tell you right now, bush league tactics like crazy colors and radish trees would never have gotten cold pureed beets into my mouth. Sorry. Not a chance. 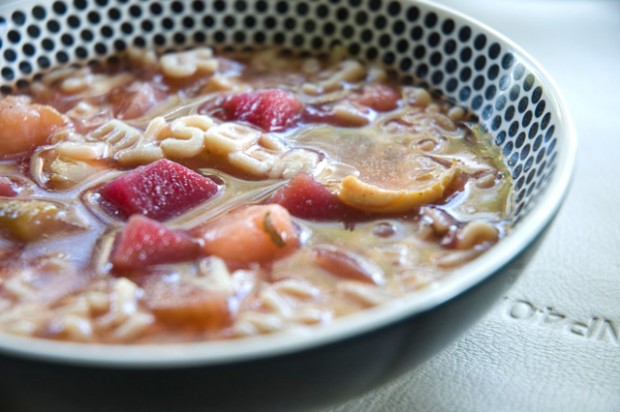 On to the Webster Stew. I had to make a compromise with this recipe, too: I used alphabet noodles. Apparently there’s no such thing as word noodles. Sometimes this world seems so primitive I can hardly believe I live in it. 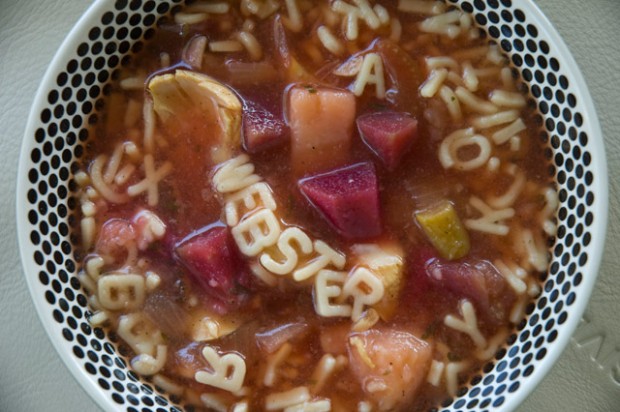 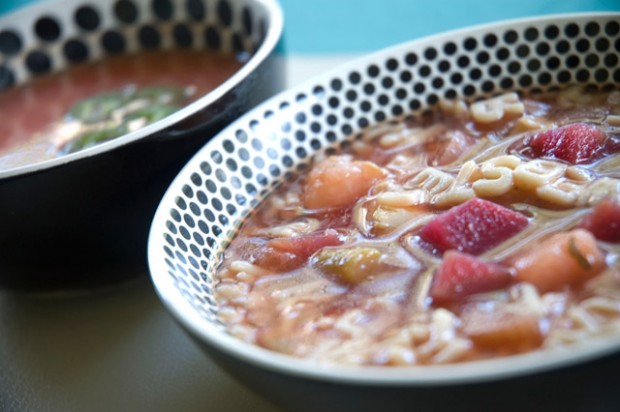