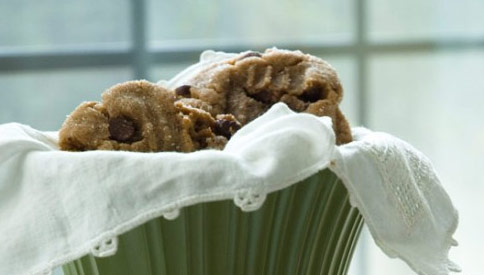 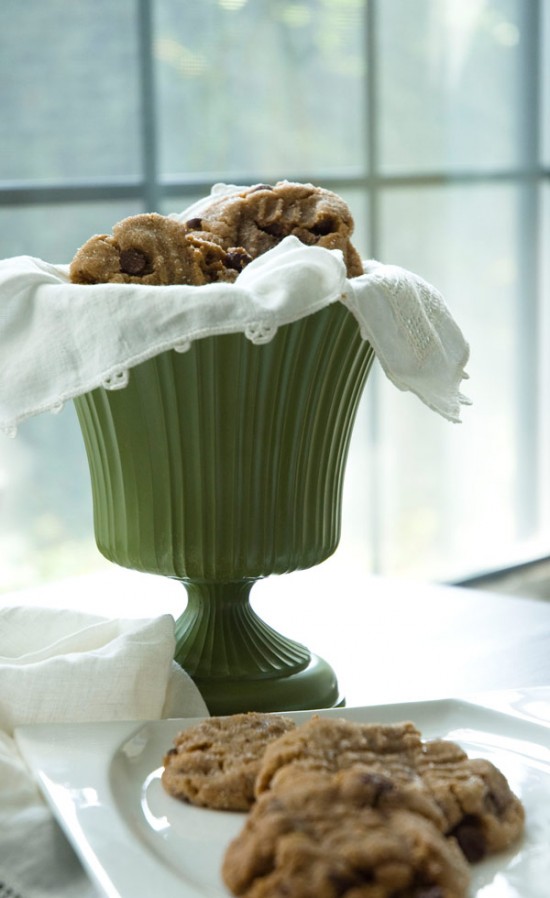 I made these cookies on Friday to welcome John home from a week-long training conference, but he was so tired he forgot to have one that night, and the next day we headed out to an awesome barbecue down in Macon.

We were there to visit our friend Paul and his family, and early in the afternoon, Paul’s uncle asked Jenny, Diana and me if we wanted to sign up for the day’s wiffleball tournament. No, thank you, we said, because we didn’t. Come on, he said, it’s fun. I don’t even know how to play wiffleball, I countered, which I was only half-sure was true, but I said it anyway because I can be slippery when it comes to excusing myself from team sports; and, I added, I can’t play anyway because I’m wearing flip-flops. You don’t have to run, he said. Thanks anyway, we said.

And he took his clipboard and went in search of someone who would be a better sport about it.

But as we watched Paul’s uncle depart, we began to wonder. What did he mean when he said you don’t have to run?

I thought wiffleball was the same as baseball, I said. Jenny said she thought it was played with mitts, like jai alai. Diana expected the ball would be tied to a pole like tetherball. We couldn’t all be right, and anyway, didn’t those games all involve running? If there is a ball, and if that ball is round, there’s running. And the one thing we were all certain of was that a wiffle ball was round. Well, more or less.

Maybe he meant we don’t have to run, specifically, I theorized. Maybe there are positions that run and positions that don’t. Maybe you are either a batter or a home-to-first runner or a first-to-second runner and so on. Yeah, Diana said, like a relay. We all agreed this would make an excellent game, but it was extremely unlikely that that was what wiffleball was.

So Diana looked it up on her phone. Wikipedia said that it was indeed a lot like baseball, leaving us further stumped. There’s more running in baseball than any of the other games we had come up with. We stalked purposefully into the deserted front yard to examine the playing field, which had been set up for an earlier game. There we found a pile of bats, several dozen multicolored wiffle balls, six miniature traffic cones down one end of the field, and a director’s chair behind home plate. 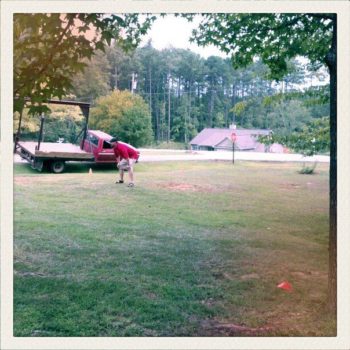 What are the cones for? we asked each other. Why are there so many balls? Is this like dodgeball? How do you play dodgeball without running? You must have to duck a lot. That doesn’t make sense. Are those cones over there part of it, too? No, those are just to keep people from parking on the lawn. Are you sure? No.

So we found Paul’s uncle and asked him how the hell wiffleball is played without running, and he explained that the number of bases you take is determined by how far you hit the ball (as marked, presumably, by three pairs of miniature traffic cones) so there’s no running except when the outfielders run to catch hits and get a batter out. He asked us if we were ready to sign up and we said no, not at all, but thank you for explaining. 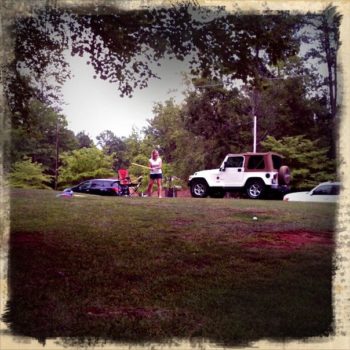 The more-sporting person Paul’s uncle found next must have been John because he appeared in a tournament later in the day. Jenny joined as a pinch hitter. Their team won (possibly—I got distracted by my camera app in the middle of the game and was pretty confused after that), and a wonderfully action- (and food-) packed afternoon of wiffleballing, beer-drinking, barbecue-eating, pool-swimming, and guitar-listening left John and me at our very tiredest when we finally returned home around 2 a.m. But he stayed up long enough to eat a cookie.