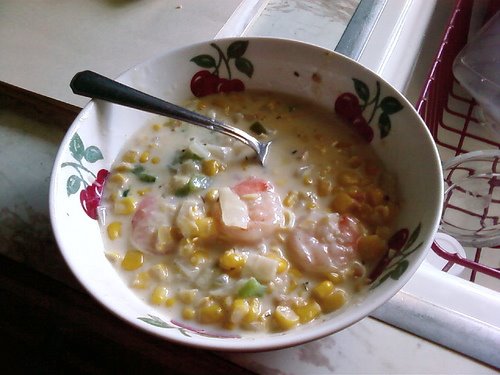 This is one of the first recipes I really made up out of thin air, and it’s got to be one of my best ever. Anyone who knows me will, I hope, tell you that it’s not like me to walk around demanding that people tell me how good they think my soup is, but I did that the first time I made this chowder. I even wrote it all down as soon as I was done eating it so that I wouldn’t forget what I’d done. Usually I forget to do that.

I’ve made it several times since from the recipe here at Knuckle Salad, and here’s the thing: IT’S SO EASY, so so so easy, and it’s delicious every single time. It’s like you can’t screw it up. It even gets requested! I love requests. Especially when they’re so so so easy. Like this.

*I used large white shrimp, because they were on sale. Before you use them, you’ll need to make sure they’re peeled, deveined, and de-tailed, obviously, but you can also cut them in half if you want. The chowder’s easier to eat if you cut them up, but it’s prettier to look at if you leave them whole, so consider your circumstances and your priorities and do what you think is right.