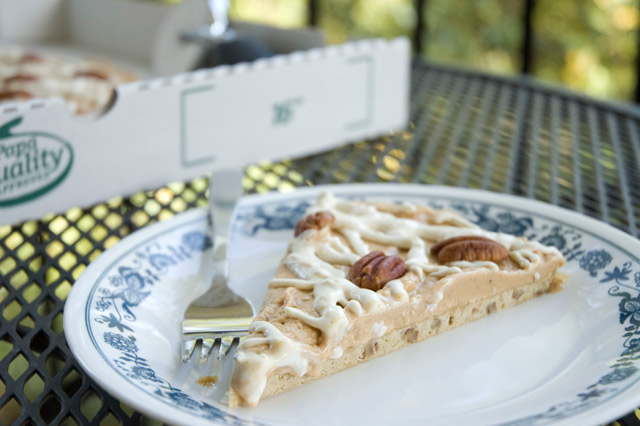 I grew up in a sort of off-the-grid neighborhood with dirt roads and no other kids. By the time I turned ten and was finally allowed to ride my bike as far as I wanted, it wasn’t a big deal, because everything within a six block radius was identical to our street anyway. There was never anybody around.

One day while I was out front helping my grandfather (he was always making me hold up boards or stand by with tools as he performed ambitious tasks around the house), a kid whizzed by on her bike. A kid! An actual three-dimensional alive kid my own age! My grandpa said, “Hey, I’ve seen that kid around here a lot lately. She must live nearby. Why don’t you go say hello?” And I was like, dude, if I were to put this hose down right now it would totally unkink and then you’d really be up a creek, so no, obviously I’m not going to do that. But I was really just shy. So he turned on his intimidation voice like I was going to be in trouble if I didn’t get my bike out pronto, which I now recognize was tough love, although at the time I thought he had lost his brain.

As it turned out, the other kid was nice! And didn’t shun me or anything! Even though I literally chased her down the block all the way to the stop sign! We got to be best friends on bikes all the way through middle school. It was great.

Thing is, even with a friend to ride bikes with, there was nowhere really to go. It was four miles just to get out of our neighborhood. So we biked up and down the dirt roads, singing loud songs and sometimes getting chased by dogs, until we decided we could totally make the four miles to the nearest shopping plaza. We figured it would be fun because once we got there we could… well, buy milk or bread or gasoline. Or phone cords, because there was a Radio Shack up there. But it didn’t matter how dumb the actual shopping was, because it wasn’t as dumb as dirt roads once we’d fished all the minnows out of the canals with a bucket and written our names in the street with a stick, like, a trillion times. Besides, all we could really afford to buy was Tic-Tacs anyway. We were just kids.

Once we figured out it was possible, we made the trip all the time, becoming veritable connoisseurs of tiny half-calorie mints. The plaza was eventually graced with new a development: a combination Dunkin Donuts, Miami Subs and Baskin Robbins. It was as if this was what we had been practicing for. We spent our Saturdays there, eating donuts and taking our time admiring each ice cream cake and freezer delicacy. They had something called a sundae pizza that particularly caught my eye, and one day when I was out with my mom, I convinced her to buy one.

IT WAS SO AWESOME. It was just a big cookie smeared with a layer of ice cream and sundae toppings, cut into little wedges, and I was in love with it. The best part was that I was the only one who didn’t find it “too rich,” so it was mine. All mine.

Then the Baskin Robbins shut down.

Years later, when fond memories of ice cream pizza returned to me, I drove to the Tallahassee Baskin Robbins with the intention of bringing back an ice cream pizza and becoming the most popular girl in the honors dorm. I’m pretty sure it would’ve worked if the people at Baskin Robbins had had any idea what I was talking about.

Ice cream pizzas weren’t just gone—they were no longer even a memory. And here’s where it gets weird: Google it. Go ahead. I’ll wait here.

See? Virtually nothing. Recently, this photo of a Halloween poster was uploaded by a Casper collector, and other than that, good luck finding any evidence that the Baskin Robbins ice cream pizza ever existed.

So I had to reinvent it. 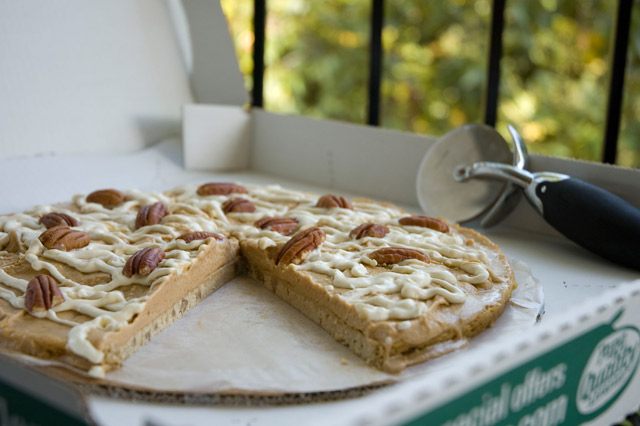 The question was, if I could make any ice cream pizza I wanted, what flavors was I going to use? I had just about narrowed it down, when Kitchen Play contacted me for their SideCar Series and offered me an assignment developing a “deconstructed pumpkin pie” for Nestlé Kitchens and Libby’s. My next move was obvious.

Pumpkin ice cream pizza pie. Hold on to your hats. 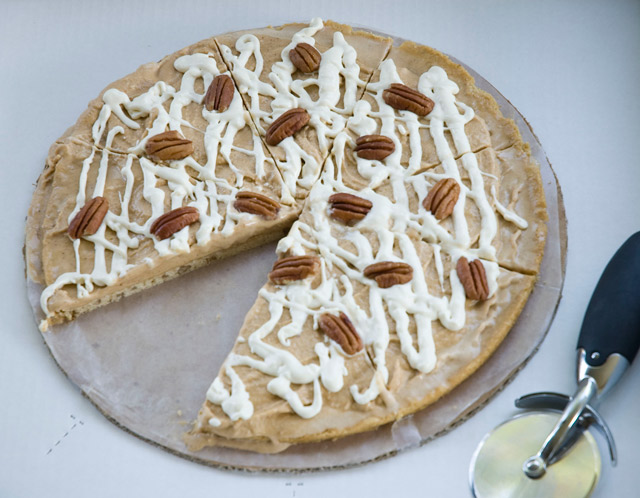 It starts with a pumpkin ice cream recipe I got from David Lebovitz’s blog, followed almost to the letter, which you can find here. I didn’t use whole milk, cinnamon sticks or fresh ginger and nutmeg, favoring almond milk instead, and ground spices which, for me, evoke a more traditional pumpkin pie. My adaptation is below, but you may want to take a look at the original and use the fancy ingredients.

The next element is Smitten Kitchen’s ineffable blondie recipe, the one I always return to when I’m in need of a fantastic, easy, anything-goes cookie bar. For this, the blondie is baked in a big round pan, then turned out in one huge piece. Pile the crust with ice cream, drizzle with sweetened cream cheese, top with pecans, and ta-daaaa! Instantaneously, a life with ice cream pizza will replace whatever regular humdrum life you’ve been living. 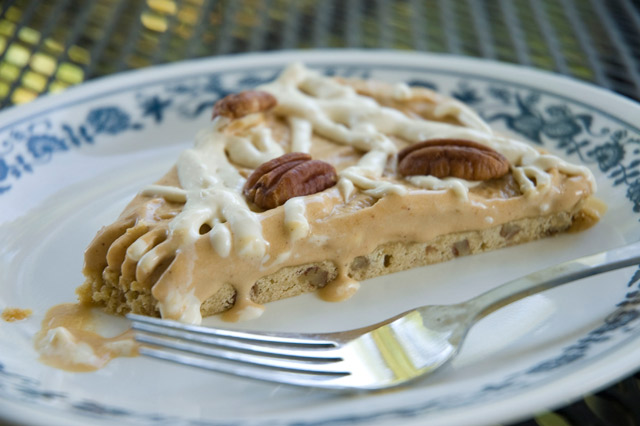 And that’s how I became reacquainted with the ice cream pizza, better even than I remember it—which is saying something, because the one I remember was stunning, and practically buried in chocolate and caramel. But no. This is better.

Once frozen, the blondie crust is firm enough to pick up and eat like a slice of real pizza. That classic pumpkin pie flavor is proudly present, enhanced by a drizzle of cream cheese and toasted pecans, and the overall ice-creaminess makes it perfect for a balmy South Florida autumn. Never mind the weather, though—I wouldn’t turn down this dessert even if I were stranded in the frozen Tundra.

That’s probably not true, actually, but as long as the heat’s on in the house, what’s wrong with a little ice cream? Live it up!

Makes one 15″ pizza, which serves at least 8

For the ice cream: 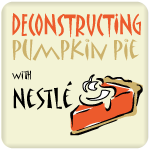