In honor of National Coffee Day, I’ve decided to catalogue some dumb stuff that’s happened at work lately, and also share the recipe I use to make homemade kahlua, because anybody can make kahlua at home. For cheap. But first, while you make sense of your feelings and collect the pieces of your blown mind—kahlua? at home?!—here are my dumb stories. The first one has nothing to do with coffee. But it’s fresh in my mind, and it seemed kinda funny at the time. Maybe it’s just the caffeine…

My day job environment is more or less characterized by miscommunication. For example, the other day, I was registering for an interactive design seminar when my office partner, Jason, said, “Hey, now that summer’s ending, do you think we’ll finally be able to open our blinds and let the sun in again?” (I guess I’ve been pretty tyrannical about keeping the blinds shut lately, what with the recent collapse of one of the building’s air conditioning units.)

“Sure, pretty soon,” I said absentmindedly. I turned to my calendar to mark the seminar.

“Whoa, whoa!” he cried as he watched me flip the pages. “November?! I think we can have light in the office a little sooner than November!”

“What?” I followed his gaze to the calendar. “Wait, did you think I just flipped my calendar open to write, ‘OPEN THE BLINDS TODAY’ two months in advance?”

“Oh. Yes, I did,” he said. And then he opened the blinds. To be honest, I thought we should probably wait another couple of weeks, but it seemed better to keep quiet.

Another day, during Girl Scout cookie season, I needed to get away from my desk, so I wandered into the kitchen. I filled my black coffee mug with water, then set it down to select a cookie. (I don’t know who buys the girl scout cookies, but there they are, for everyone! Even me!) A distant colleague from the editorial department came in, and since I was the only one there, I knew she must be talking to me when she said:

Next to me, the coffee pot was empty, so I pieced the story together. “Geez, you made a pot of coffee, and it was all gone before you even got here?” I chuckled incredulously.

“YEAH! Man! People around here are PIGS!” She was very emotional about it, so I was glad not to be involved. I took my cookie and my water and as I exited, I offered the following inane-but-jovial comment: “Looks like you’d better find a bigger filter!”

Only after I got back to my office and set my mug of water down on the desk did it occur to me that to her, I appeared to be carrying a big, full cup of coffee.

Speaking of coffee, there seems to be an issue around here with people being unable to make a proper pot. It’s caused a number of rifts and confrontations among the staff—although the confrontations mostly consist of someone shouting, “WHAT BUMBLING INBRED IS RESPONSIBLE FOR THIS BILIOUS SLUDGE?!?” to, by unfortunate coincidence, that very inbred—and the latest perpetrator of undrinkable joe happens to be a very nice salesgirl who apparently makes it rather too strong. Unlike some past offenders, though, she is fully aware that her coffee skills need improvement.

Last week, I heard her apologize to one of the designers for ruining the coffee again. I took a detour through the kitchen where she was standing and remarked, “You know, if you can’t make good coffee, you should just own it. Just be like, ‘I make horrible coffee. That’s who I am. You want horrible coffee, you come to me.’ It could be your thing. If people want something other than horrible coffee, you tell them, ‘Go ask someone else!'”

She pointed to the coffee pot, where someone had dumped out her coffee and made a new pot. She said, “See, Jason must have made this one, because at least it’s the right color and you can see through it. Mine was, like… it was like…”

Anyway, on National Coffee Day, I have two recommendations for you. One is to find yourself some free coffee, because they’re giving it away out there. I hear everybody gets a free cup from Dunkin’ Donuts… although in certain New England markets, I also hear that a portion of today’s Dunkin’ Donuts coffee sales are going to the Special Olympics, and the conflicting logic boggles me. I hope it isn’t a sinister way of making it sound like they’re donating money to a good cause when they really aren’t, because a portion of free is zero. I’m sure that’s not it.

My other recommendation is to go make yourself some kahlua. It’s super easy, and yummier than the store-bought kind, because you can use any coffee you want. (I used butterscotch-flavored gourmet coffee. Lovely if you can find it.) 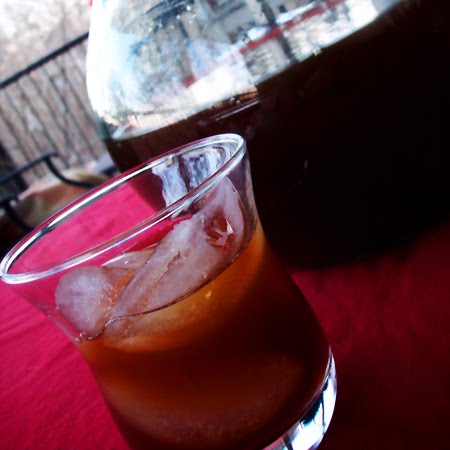 I didn’t change a thing about this recipe from the Cupcake Project, because it’s flawless. I’m pasting it below with my own notes, but you should definitely still visit the original site. If you don’t, you’ll never get to try the Cupcake Project’s other awesome recipes, including the one for homemade Irish Cream.